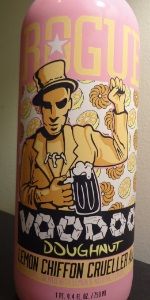 I am still running through my Rogue backlog & frankly, looking at some of the price tags on these, I am surprised that I pulled the trigger in the first place. These enameled bombers mean that I am unable to see what it happening inside, which never makes me happy. OTOH, many of them have mellowed nicely during their wait for me to get to them. Let's see how this one fares!

I began by Pop!ping off the oxygen fixing cap & starting an extremely slow, gentle C-Line pour since I could not see what I was doing & I did not want to muck this up. The initial pour went well, forming just under two fingers of dense, foamy, rocky, tawny head with moderate retention. Color was a slightly-hazy solid Amber (SRM = > 7, < 9). Nose was very lemony, but rather than being tart, it had a pronounced sweetness. I remember a share when this was first released & I thought that it was way too sweet at that point. I am hopeful that time has mellowed this somewhat. Mouthfeel was medium. The taste was less Lemon Crueller than Lemon-filled with powdered sugar in terms of its relation to donuts. I liked that the vanilla extract & marshmallows had faded by this point, making it MUCH more palatable (to me, at least). It was lemony, but less natural tasting than akin to pie filling, if that makes sense. There was still a lot of residual sweetness present where real lemon would have had a greater tartness. Did I experience lemon? Yes. Is lemon a fruit? Yes. In that case, it falls into the F&F Beer style nicely. As to its donut origins, I was craving a cup of coffee as accompaniment throughout! 8=O Again, I think that it was the unrelenting sweetness that made me feel this way. Finish remained sweet, not cloying like it struck me originally, but still sweeter than I would prefer to drink 22-fl oz of from a bomber. YMMV.

I'm honestly not sure what to make of this beer. Purchased with a friend along with several other unique beers to sample. Poured this into a frosty pint glass for drinking. Initially, the nose was not good, however after a few drinks, I found myself thoroughly surprised to be enjoying this beer. Having read the reviews on this concoction, I really expected to dislike it but ultimately enjoyed it. Some of the review complaints are valid here (sweet and candy like) but ultimately the mouthful is excellent on this beer and the taste has a subtle lemon cream ale flavor. It may not be suitable for all beer drinkers but if willing to think outside the box and try a different beer style without judgment and comparison to the standard highly regarded beers, this beer provides a unique and refreshing option.

Reviewed from (long-standing) notes. Poured from 25.4 oz. bottle into a Peg's snifter glass.

T: This tastes like if you mixed lemon meringue mixed pie filling with Pledge, and then snorted a nostril-full of Country Time lemonade powder. All with a medicinal or cleaner aftertaste. Acidic finish. A minimal bready sweetness tries to show up but is quickly tamped back down by the ghost of shitty lemons. It finishes with lingering lemons and acid.

O: Rogue got me again. This was really not good. Drainpour.

This is a nice beer. The lemon flavor works well and isn't too strange to fit like some other beers that try to use that flavor. The scent isn't much to identify and it feels juuust a bit bitter, but it's a fun beer overall.

Rogue Voodoo Doughnut Lemon Chiffon Crueller Ale is a mouthful to say, yet it looks like something that could be easily gulped; pale and golden, its clear and animatedly bubbled complexion is the stuff that appeals to most anybody. Factor in the pink bottle and strange label... you've got a beer for the masses (even if it has no head).

While the brewery claims to use "a baker's dozen ingredients" the actual government tested ingredients list shows only 'lemon juice, lemon extract, vanilla beans, vanilla extract and marshmallows'. By my count that's not even a half dozen. And it's curious not see to see "artificial" (or even "natural") flavours listed on there either...

Because despite this Rogue beer being trademark 'free of chemicals, additives or preservatives' it sure tastes like scientists had a part in making it; flavours of lemon custard, banana cream and powdered-sugar confection are far too striking to *not* be artificially induced. Clearly something else is at play here...

Who knows what. That's between Rogue and Voodoo Doughnuts. Either way, what's tasted in the glass is a sweet, citrus-spiked, Limoncello-infused, creamy and sugary concoction that's intended for dessert (either to be added in or had alongside). Biscuit malt makes a natural accompaniment and compliments the lemon cookie notes nicely.

Rogue Voodoo Doughnut Lemon Chiffon Crueller Ale is yet another beer that distracts from the truly great things this brewery offers. This is a beer only for those who wouldn't buy beer otherwise. Do me a favor and pick up Old Crustreacean, Dead Guy, Imperial Stout, Hazelnut Brown, Weizen, Brutal IPA, Pumpkin Ale, Oatmeal Stout or Red Ale before this.

Taste: Lots of lemon, which is delicious, but its kind of punctuated with a strange spice flavor (not pepper spice). very smooth finish

Mouthfeel: Pretty thin body. very smooth mouthfeel. not much else to report.

Mostly clear dull orange with fine, flecky, suspended haze. Even, foamy, beige head of mediocre retention. Smells like concentrated lemon juice. And maybe a little boozy. Oh my, this one actually tastes like a lemon-frosted doughnut or cookie. Cloyingly vanilla-sweet and lemony-tart but still balanced with bready backdrop and bitter, rindy suggestions, evidently from lemon extract, even if aided by hops. Was expecting it to taste more like a hard-lemonade so this is a pleasant surprise. Palate quickly overwhelmed, saving the rest for later. So much better than the Maple Bacon one. A treat, but not really an easy drinker. Hoping the Raspberry one is as good or better. Medium-bodied, tingly then almost creamy with fine suds.

**
07/05/2015
Aroma is lemony, cakey...touch of yeast. Appearance: Hazy yellow orange. Small white head. Taste: yeah...kind of like a doughnut. Feel...a little creamy. Not bad. True to the name. A little overly sweet but what do you expect for beer based on a doughnut."
**

22oz bottle. Poured out a clear, amber color with a small, off-white head of bubbly foam. It left minimal lacing. It smelled sweet with caramel and toffee. Some tart lemon notes. Sweet toffee taste with toasted caramel, tart lemon and other fruity flavors.

Well, lemon, lemon, lemon, and more lemon. I really love lemon everything so for me personally this beer, though some may find it a gimmick, works and is pretty fantastic!

Poured from a 22oz Pink Bomber into a Mason Jar showed off a nice Golden brew with a 2 fingered white head, the aroma got better as it warmed and showed off more layers of flavor. A lot of the reviews note the past Voodoo Doughnut beers and to me seem to miss the whole point...fruit beer, smoked beer...etc. These might not be World Class Best of show to the people that point fingers at anyone who is not into craft beer, I always try to rate a beer by the style and not let other reviews or the brand as a whole sway my rating. I love trying new things and this is part of a ongoing set of brews that are somewhat of a gimmick but still have something to show us if we open up and let it in. I'm a fan of things like this and will support all the new offerings as they come out...cheers!

APPEARANCE: A thin white head fluffs up for a moment when the beer is first poured, it vanishes quickly though. The beer itself is bright orange and a little hazy, it looks like a good Double IPA. Streams of tiny bubbles can be seen rushing up the sides of the glass. No lacing.

SMELL: Candied lemon zest and vanilla. It smells like lemon-flavored frosting. I enjoy it.

TASTE: The smell may have been the frosting, but the flavor is more like lemon-sugar cookie with frosting on top. Sweet, and it first it’s not as sweet as I thought it would be, but it builds. And half way through the glass, it is becoming more cloying. Lots of vanilla, sugar, the marshmallow seems to be there, and plenty of lemon.

MOUTHFEEL: Very sweet. Cloying at times, but the thin body and strong carbonation keep it drinkable, at least in some quantities.

OVERALL: After Maple Bacon, I had very low expectations for this beer. The good news is that this one beat it. There are quite a few enjoyable flavors here, but in the end they are just too much. I can’t put down the whole thing and even splitting the bottle it’s tough to get through. I will try another variation in the future though.

Tastes like someone found some store bought donuts in the trash, threw some well aged sour lemon, stale marshmallow and tainted vanilla extract on top and decided to add some alcohol and carbonation as a pour excuse to call this awful drink a beer. Only way to drink this is to throw it down the drain. Sorry Rouge. You guys have made some good stuff, and hopefully this was just a bad batch but I won't chance it again on this one.

This was better than the other donut beers I've had by them. The lemon comes through well and the body of the beer isn't a disappointment, but nicely satisfying.

Slightly hazy golden yellow, finger of head with some retention and lacing. Smells like some sort of lemon scented household detergent, but still it is somehow non-offensive. The lemon flavour is sweet but comes across as extremely synthetic, the finish is a sweet buttery doughnut with hints of vanilla. I knew what I was getting into with this one, and the Brewers did indeed achieve a flavour profile matching the description. My only qualm is the synthetic lemon flavour. A more authentic candied citrus flavour would've improved the score. A novelty that is certainly not worth the $12 I paid for it, but I don't regret giving it a try.