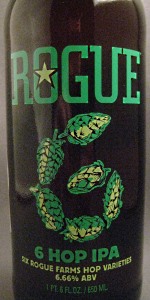 12 oz. can from a 6-pack purchased from Roth's in WEst Salem . $9.99.
Pours a hazy amber colour? With a very nice thick and frothy off white head. Leaves great lace.
Aroma is pretty subdued. Maybe too many hops spoil the beer?. What there is is a strong caramel maltiness..then some floral hops. A bit of old style Oregon dankness in the end.
Flavor is a bit better with the hops. Very bitter, Which I don't mind. Fairly old style bittering.
Good mouth feel , well carbonated and medium thick.
Despite the haze this is an old style 1990s Oregon IPA. I like it others may not

Trying side by side. With the 4Hop version. I like. The 6 hop better. Less Ash and hairspray in the taste. Fruitty notes come out stronger. A touch less carbonation. Closer to the Brutal IPA that i like.

I tore through this series when I was drinking at Mellow Fellow in Reno while waiting for an Aces game to start up. They're all pretty much the same. Once you get into making a series of beers that are substantially similar to each other, I notice beer reviewers tend to rate the one with the highest numbers the highest. For instance, if its a series of beer aged in a barrel for different lengths, they'll choose the one that was in the barrel the longest. The one with the highest abv. The one with the most, or in this instance, the highest number variety of hops. In this case, it is 6. I believe I had a 7 hop one too, and while virtually indistinguishable, I'm sure the 7 hop one is rated higher.

Anyways, the beer pours a golden color, it approaches clarity but doesn't get there. 1/2" white head. Aroma didn't really impart a lot of dry hopping, this is probably the weakest link to the beer. Taste was a bitter medley of hops, nothing was too pronounced, or stood out over the others. Frankly, the majority of these hop varieties don't seem to add much to the overall equation, other than upping the number on the label. Its a decent beer, but doesn't really pop with sexy proprietary hops, instead uses homebrewer homegrown type of hops.

Solid ipa from Rogue. This brewery has impressed me since 1996. Very smooth and hoppy. Could be bitter and better for my tastes but then again this is not the Alchemist. More of a session and very drinkable.

Taste is remarkable well balanced given the lack of nose presence. There is a good malt presence, with a smooth citrus finish, but no defiant hop presence.