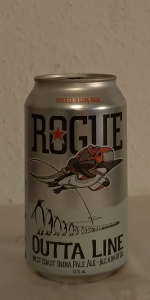 Notes: A bright honey colored West Coast IPA with an enticing fruity aroma. Flavors of tangerine and mango up front and a balance of malt sweetness and bitterness to finish.

At the very core of Rogue is the idea of getting outta line. That is to say you don’t need to follow the plan laid out in front of you, you don’t have to fit in and you don’t have to follow the crowd. We brewed this IPA as a reminder that there is no limit when you have the courage to stand out. Available year round, Outta Line IPA is a bright honey-colored West Coast IPA with an enticing fruit aroma.

Poured from a single-serving can into a tulip.

The flavor is more distinct but a little boozy and burned for the ABV. Mango and pineapple meet dank and resiny west coast hop flavor.

The mouthfeel is medium and has good carbonation and finish.

Well intentioned and flavorful but this brew has both booze and hop burn going on.

Poured from a 12 ounce can into a pint glass.

cool can on this one, a little different look from these guys, and a flavorful ipa inside it, although maybe not as distinctive as i hoped it would be with some of the rogue hops in it, i think i always expect these to be more unique than they are in their beers, but its been awhile. this is a little reddish to tarnished penny in color, with a rising white head in the glass, great clarity. it smells and tastes maybe not quite perfectly fresh, like the malts are rising up and the hops are fading back, but maybe its just a bit more of a classic recipe with european crystal malt apparent in here, good balance, but maybe at the expense of some hop nuance. it doesnt have to be that way, but they cut this off before it dried all the way out in fermentation, and the little bit of grains sweetness that lingers here is a little distracting from the best parts of the hops. some pine and sappy resin texture at the end which actually works with the grain, but the citrus i detect is way in the back, and a light mango note is almost totally obscured. i like this having some bitterness at the end, i think thats why the malt is so dialed up, and it drinks bold with both of them on the accelerator. the bitterness lingers and its nice, old school, northwestern, and good. there is a cleanness to this, a mineral thing, that i have liked in other rogue ipa types, maybe their water and their yeast together, but it helps lighten this just a little. overall a well made beer of course, but i wanted a little more from it, not as distinct or interesting as i was counting on, and im not sure i would choose it over some of their others...

Presentation: 12 oz. can with the canning date printed on the bottom. Served in a pint glass.

Appearance: The thick, rocky, bone white, two finger head stays around for a while and leaves behind a thin foam layer and lots of patchy lacing all over the glass. It's a hazy, bright honey color.

Smell: Tropical aromas of grapefruit, orange and pineapple hit the nose first. They're followed up by some herbs and a hint of fresh pine.

Taste: It's juicy and fruity to start with some citrus flavors taking up the most room. A mild bitterness comes through in the aftertaste as well as some sweeter grain notes.

Overall: A very good, well balanced IPA that's easy enough to drink due to the low bitterness. There's nothing special to write home about here, to be honest, but there's nothing bad to say about it either.

12 oz can with a 29 March 2019 date stamp on the bottom of the can.
Pours with a slightly hazy dark amber body topped with a good white head.
There's a good bit of malt with the hops in the nose but the flavor is very much hop dominated. The hops provide tropical fruit with some earthy notes.

Poured into a grip shaped goblet: color is gold, head is off white with fine to small bubbles that present 1+ fingers thick and then dissipate to a thin top with some lacing.

Taste follows with neutral barley, some biscuit and touch of toast, hops come through with grapefruit rind, pine, herbs, earth - seems so simple but there is some complexity as warms with mosaic tropical notes amplifying and maltiness holding.

Mouthfeel is seemed to start crisp and bitter, but then softens with warmth with moderate carbonation, light sweetness, and bittering finish.

Overall a very good IPA with a flavor/feel that seems like a blend of old and new spins on IPA with good bitter, citrus notes and a hint of softening wheat and tropical hops.

Well, after ~ a week of sifting through my backlog, this is the last remaining Rogue of any sort (bottle or CAN) at Chez Woody, home of The CANQuest (tm)! I have nothing against Rogue & I will BOLO for any not previously reviewed as I move forward, but for now, I CAN move on to other brewery's output.

From the CAN: "Dedicated to Going Rogue"; "West Coast India Pale Ale"; "Dare*Risk*Dream"; "At the very core of Rogue is the idea of getting outta line. That is to say ... you don’t need to follow the plan laid out in front of you, you don’t have to fit in and you don’t have to follow the crowd. We brewed this IPA as a reminder that there is no limit when you have the courage to get outta line."; "Pair it with[:] Grilled Bruschetta[,] Dungeness Crab[,] Apple Pie"; "66 IBU"; "11.8 SRM".

I sat for a moment, before CANducting the Crack! of the vent & the following Glug, CANtemplating this CAN's graphics. A jet-pack propelled penguin is right up my alley! Penguins are absolutely my favorite avian, by virtue of being a PGH Penguins fan since I was 9 y/o. I have my own rookery of soft toy penguins of various sizes & species & so I invited some of them to join me for this review. It all went extremely well, from the formation of two-plus fingers of dense, foamy, rocky, tawny head with very good retention to the photo shoot. Color was solid Amber (SRM = > 7, < 9) with NE-quality clarity. Nose gave the lie to their claim that it was a west-coast AIPA in that while I got pine & Simcoe the naughty kitty's cattiness, I also got some tropical fruit, all underlain by a caramel malt base. A check of their website revealed that they used "Zeus, Mosaic, Simcoe & Cascade Hops". Mosaic is the one that was NOT like the others. Not that it didn't belong, but it was unexpected and jarring. Mouthfeel was medium. The taste was REALLY nice, a definite throwback with the Simcoe & Cascade hops leading the pack & the others acting as their supporting cast with a malt base that was not caramel, but had a sweetness that I could not quite identify. Back to the brewery's website, to find that they used: "2-Row, Munich, GWM Brūmalt & Wheat Malts". Interesting! I was quite enthralled with & by this one. It was scratching my hops itch & satisfying my hops jones nicely. Finish was dry and moderately bitter. Phew! MUCH more like it.

Taste on entry is a burst of bright hoppiness covering the rich malt cake like icing. In addition to the malt I get grapefruit, pineapple and a bit of other undefined fruit influence. Bold, well defined flavors that work seamlessly together.

Altogether it's a well thought out brew with complexity and bountiful flavor.

Smell of light orange peel but not over welling. A light fruit flavor of orange and grapefruit with the a light bitter hop, nice balance. Can be an any day beer.

Pours into a standard pint a chill hazed lighter amber shade with a half finger white head atop that settles into a soapy-like mass.Citric with a nice hefty resin quality to it in the nose,love the old school things going on here.Citrus fruits hit upfront on the palate then a resiny sharp element takes over over top of a sweetish biscuit dough base,the resin and pine becomes more assertive as I drink more.Good job here for Rogue yeah they put a little more tropical fruitiness in the beer for the new age but stay true to the old school roots with the resin and pine flavors,love it!

Notes via stream of consciousness: Nice looking label with great artwork. I'm not sure what a penguin with a jet-pack has to do with a tropical IPA but maybe that's where he's headed, off to a tropical beach somewhere. It's poured a very hazy orange colored body beneath a finger-thick head of creamy white foam. The aroma is indeed tropical with notes of pineapple, orange, mango, grapefruit, and pine. It's bright and enticing. The flavor follows with more grapefruit, more of a tangerine than an orange note, similar mango and pineapple, and a touch of papaya before the pine rises in the bitter finish. How many IBUs is this? 66, yeah, that makes sense. Some grainy and lightly caramelish malt comes through as well and makes a supportive base for the hops. It's really quite nice; it's lively. In the mouth it's medium bodied and crisp. Looking back, the head held well and there's some very nice lacing left behind on the glass. I'm pretty impressed. It's a great west coast IPA that manages to be a little bit original. Well worth trying for fans of the style.
Review #6,528

Pours a slightly hazy gold with a small head of foam with some lacing.

Nose consists of grapefruit citrus, hint of tropical fruit, little bit of dankness so it's probably going to be fairly bitter.