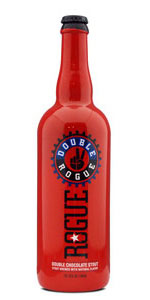 Pours a solid black body with a khaki head. Good retention. A couple of rings of thin lacing

... but what is the style? Beer with adjutants ? A "malt beverage"? There was so much chocolate added in the brewing process that at times this was more like drinking a cholate drink then a beer.
That said, I did enjoy it and will probably get it again. The interesting thing is that I detected absolutely zero (of the 9%) booze in the scent or the taste. Whatever this is I like it!

Excellent head production and good retention; nice lacing. Nose is roasty and chocolatey even from a distance. A bit sharp and metallic up close, with additional notes of cola, molasses, and prune.

Really lovely blend of the palate: chocolate, nuts, roasted malt, espresso, toast, caramel, molasses, cola, prune. Plenty of chocolate, but it's not overly sweet, walking the line between a flavored imperial stout and a dessert stout.

Full bodied but lively. Drinks a bit easier than the 9% ABV.

Usually I reserve such high scores for Barrel aged stuff, but man, this is among the best stouts that haven't spent time in a barrel.

Look: Brown head, even darker than most stouts. Impressive and looks more like hot chocolate than a beer.

Taste: Follows smell pretty closely, this stout probably incorporate chocolate better than any other, save the Founder's titans like KBS and CBS. Extra impressive is the flavor you get out of this at "only," 9%. Old Rasputin, at the same percent, tastes like a Guiness in comparison to this beer (no hate to Ol Rasp, still one of my favs). Despite the massive chocolate flavor, it toes the line well between dessert and beer. I never felt like this was TOO sweet like many adjunct stouts leave you feeling. Notes of coffee as well, though what good stout doesn't have that.

Feel: Again, really surprised at how full and rich this stout is without any barrel age. Though not *quite* as thick and chewy as a BBA Stout, it manages to get close without even hitting 10%, quite a feat if you ask me.

This beer is great with some cookies or brownies along with it if you are really craving that chocolate taste. On the other hand, it isn't so sweet that drinking it alone is nauseating. Great job by Rogue, will absolutely pick this up again if I have the chance. Another big selling point is that it isn't quite as expensive as a BBA stout but still scratches that itch for me.

Bought a single 16oz can $4.50 Village Bottle Shop
90 Days old
Smell of rich chocolate, followed by cola
Dark black color
Heavy, creamy mouthfeel
Medium-high carbonation
Taste of alcohol hits me first, then black coffee, chocolate,
Overall good, not great. I like high ABV beers that hide their alcohol, but this one has the alcohol upfront on every sip. Once you get pass that then its good so overall I think there are a lot better ones out there so probably won't buy this again.

Taste: Very chocolatey, with a bitter undertone that fades into an earthy bitter finish.

Overall: A nice stout that gets a bit too bitter at the end to recommend it as a dessert beer, but still good to try.

A very dark brown with a dense , brown head with excellent retention and lacing, this looks great. The nose has a lot of chocolate, though not in a pastry way. Instead, it's toasty, creamy, sweet, with some vanilla, milk chocolate, a touch artificial, maybe? Mild roast. The palate opens with mild roast, a moderate cocoa, mildly burnt, rather heavily toasted with a fruity yeast flavor. Lots of milk chocolate. A definite yeast flavor is present. Deying, vegemite like flavors linger on in the finish. Solid

Canned on 12/26/20. 16oz can poured into a tulip. Pours almost black; khaki head that fades leaving great retention and sticky lacing. The aromas are malt forward. Hints of cocoa and chocolate. The aromas are mild overall. The chocolate really comes through in the flavor department. Lots of dark chocolate to give it a nice little bitterness. Hints of vanilla and marshmallows in the mix. Some roasted characteristics. Mild hints of coffee. It's more bitter than sweet. Malts do their thing. Alcohol is well hidden. Mouthfeel is full-bodied with moderate carbonation. It's interesting because it almost feels thin one second and then it's fluffy and creamy the next. Either way it's just fine. This beer is dangerously drinkable.

This is a solid imperial stout. It might not be super flashy, but they did a really nice job of showcasing the chocolate. I really like their regular Chocolate Stout although I haven't had it in a very long time. I think they do the original justice with this version. It's enjoyable. Not bad at all.

It kind of smells like chocolate and bread. You can also catch that rich stout bitterness.

It's not at all thick for a stout with a medium body. It does have a little carbonation. It finishes with a long bitterness to stake it's claim as a stout.

It's very good.  Full of flavor and a pleasant mouthfeel.  I'll give it an even 5 out of 6. That's kind of odd that I think of 5 as even.

Wonderful orange bottle. Pours as dark as can be with a nice full head. It has an immediate chocolate aroma even before you raise it to your nose and a chocolate and coffee flavor. Very enjoyable on a cold, wet Northwest afternoon.

Really enjoyed this beer at the brewery. Had both the regular and nitro versions. Both excellent, but preferred the nitro.

A- Love the bold red bottle and cartoonish chocolate bar pieces on the artwork! Anyways, this pours an awesome dark wet potting soil/black color with full opaqueness throughout....no light is getting through this one! The head is rich and creamy dense and has superb retention.....the dark tan colored foam starts about three fingers thick and settles to around one finger.....it really reminds me of what a nitro stout would look like. The lacing is also thick and sticky, leaving a snow capped mountain range around the inside of the glass. I would say that the overall look is of motor oil like texture....very impressive!

T- I get many of the same flavors as I did in the aromas, however, everything amplifies and the intensity becomes greater! The dark chocolate notes become heavy cocoa enriched, and bitter cocoa powder shows itself too. The coffee becomes less mocha like and more French press dark blend. The malt sweetness becomes much more toasted and bitter in a charred like manner. Oaked vanilla cream and yeast are present throughout and hints of alcohol add tang to the palate, before finishing in an Earthy burnt/hopped fashion....it lingers as a Stout will do, but it is seemingly clean all at the same time. Excellent!

M/O- This is definitely leaning towards full bodied, and the angle is quite steep! The carbonation is so rich and creamy, the flavors and liquid simply coat the palate methodically.....this is truly a real pleasure to enjoy. Overall I feel that the drinkability is high, even given the alcohol and body.....it is just so tasty and dessert like that there is absolutely no reason to share this, especially if one is planning on having this as a slow drink. I am completely happy to have spent the nearly $20 here in Alberta (thanks gov't taxes!) on this and highly recommend this to anybody that ranges from just getting into beer, over to the connoisseur....you won't be disappointed!

Double Chocolate Stout from Rogue Ales
Beer rating: 94 out of 100 with 1838 ratings