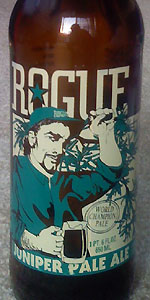 Yellow liquid with a hint of orange; murky.

Slight hops, slight lager in the nose. Not much to smell.

Orange appearance, looks like a good beer, hearty. Aroma was a little bit treeish. Taste fell flat, weird additions of spice and tree rack dominate anything that I believe is hops, barley or yeast.

Can't really say this tastes like a pale ale or juniper. This is Rogue/DFH doing what they are most known for, kind of making you go 'what the hell was that I just had?"

I had much higher hopes for this Pale Ale. It's an alright Pale Ale - very piney, as I guess one would expect. But the piney flavor didn't necessarily equate to a "juniper" flavor in my opinion. Drinkable, but I don't think I'd buy this beer again.

Well, I usually don't buy Rogue given their prices. However, I make an exception when it comes to small singles. Here goes:

S: Lemon, coriander, and substantial bready aromas coming from the yeast. Very bready. Hint of juniper, although it's not prominent.

O: Interesting beer. Definitely not worth the price, however.

Appearance - Clear and pale amber in colour this beer had light but constant streaming CO2. Atop there was a decent white soapy foam head that died to a lace cover very quickly.

Smell - The front was dominated by sweet sugary malts with some of the bitter juniper berries but there was also a distinct aroma of candy floss.

Taste - Similar to the nose this beer started very malty, sweet and sugary, up front with that same candy floss element. The juniper then kicked in about half way through throwing much needed balance in there. This beer did boast a nice bitter finish with a mild hint of booze. This beer turned out to be well balanced and much tastier than it looked or smelt.

Mouth feel - Smooth but towards then thin side of things in the body dept. This beer also to me had a rather cloying finish and so so lingering in the back of the throat.

Overall - The look, smell and mouth feel were all pretty average but the taste of this beer worked well for me. It delivered good balanced between a sweet malty front and more bitter nippy finish.

Don't waste the money.
This is a mediocre beer sold at a premium price.
The juniper flavor is nice but not well pronounced.
Other than that, this beer seemed to me like another lower-end pale ale. I guess if I could get a six-pack of it for the same price I just paid for the 22 oz bomber, I would buy it again and be happy.

Quick review. This is an amazing pale, the juniper mostly gets lost (at least to me), but it's no problem. Everything else is right up my alley: dry, great carb, perfect amount of body & malt, just enough hop. I could drink this all day.

I would not recommend this beer. The feel was assaulting and there was barely a hint of Juniper in it. I love Rogue and most of the beers I've had from them have been superb. That being said, you can't win them all and this beer is proof that even Rogue produces duds every once in a while.

Look: Pours a cloudy straw yellow (16-18 SRM) with a thin white head that diminishes to almost nothing. Not a massive amount of lacing in evidence. So far, so good.

Smell: Mostly hops - I've come to expect this from quite a few American beers, but it's not quite as in-yer-face as some. There's a certain bready maltiness in there too, which isn't surprising considering the grain bill. Not much in the way of juniper, though.

Taste: Ah, so *there's* the juniper - if you're expecting gin-flavoured beer then you're going to be disappointed, but it adds a nice, spicy edge to the hops and malt. Surprisingly, there's a fairly good balance between the two - hops up front with a malty, spicy finish. Not bad at all.

Feel: Surprisingly smooth, especially with the spiciness that the juniper imparts and it helps to take the edge off the hops somewhat. Fairly light carbonation with a clean, hop-laden finish.

Overall: Not half bad, although like others I'd be hard put to pick out the juniper if I didn't already know about it. A nice balance between hops and malt, in stark contrast to some of the hop-bombs I've had recently, and the juniper adds a nice twist. The rogue in me thanks you.

Pours a mostly clear gold with average head and decent lacing. Aroma is light, smells between a good pale ale and a light IPA. Don't pick up much of the juniper in the aroma. Taste is of a nice, hoppy pale ale, with a light touch of the juniper, not too much. Overall, I might not know the juniper was in there unless you told me. Overall, though, a good pale ale, balanced well and feeling good on the palate. Light aftertatste, pretty clean finish..

Very smooth and drinkable beer. The Juniper flavor added a different note that I enjoyed. Not a huge fan of everything Rogue is doing, but this one is a winner.

A: See through yellow/orange. No head.

T: Caramel, citrus, juniper berry dominate. Has some bitterness on the back end.

O: This was an ok beer. It wasn't bad, but wasn't complex or very interesting. I've had better beers with juniper added.

Poured into a balloon glass.

Overall: Really solid, would be easy to session.

Taste: Pleasantly bitter, with a strong flavor of (what I think) is the juniper. Remains complex throughout.

Overall: An interesting beer - I was not impressed at first but the tasted definitely grew on me.

I liked it! Almost no head on the golden-amber colored ale. Nose had bread-like maltiness with a background of spiciness and piney juniper berries. Taste was the best part, a wonderful balance of malt, hop and spice. A honey, bread malt invites you in, followed by the spice, very piney-notes that come from the conifer juniper berries. The berries are completed with some gentle, but noticeable hops, floral and citrusy in nature like a weak IPA which really wrap it up to a crisp and slightly bitter end to balance out the malt and sweetness present throughout.

I disagree with all the average reviews, this juniper ale was a well-balanced, juniper pine spices were quite noticeable, which went great with the honey malt flavors and the hops at the finish. Worth getting again.

A: Golden copper in color, with a nice transparency to it, has almost no head at all, and left just a tiny bit of lacing around the glass.

S: Strong hints of lemon zest and grapefruit, following with some pine notes as well, the hops were present on the nose, no juniper though.

T: The balance of the beer was not to bad, the lemon and citrus were present throughout, hints of pine on the tongue as well, slight breadyness also. Still no juniper, that I noticed at least.

O: Nothing great about this beer, easy drinker, but was expecting different flavors from the herbal notes but didnt find them.

Appearance: pours a clear amber in colour with a fluffy white head that drops quickly to a decent film. Great lacing down the glass.

Aroma: some bready aromas with a touch of berries and spice.

Taste: I'm not tasting the juniper tartness I was expecting - just a decent but standard pale ale with some hop bitterness.

Aftertaste: pretty much follows the taste, but with a bit more bitterness.

Mouth feel: a moderate body with just enouugh carbonation to carry the flavour.

Overall: once again an average beer from Rogue for an exhorbitant price. This is the third I've had, and the third that is way over-priced. I would compare this beer (at AU$140+ a case) to Matilda Bay's Fat Yak (at AU$52 a case).

Appearance - Pours a semi-clear, golden sunset orange with a white, near two-finger head. Good retention, leads to a broken, webbed layer of suds across the surface. Strong lacing left around the glass with nice stick.

Taste - Follows the nose. Clean malt bill allows the juniper to shine through with touches of berry fruitiness and a light spice bite. Notes of grassy bitterness in the finish.

Mouthfeel - Light to medium in body with lively carbonation lends itself to a crisp, dry finish.

Overall - A good pale overall. Nothing mindblowing, but great balance in flavor and mouthfeel and entirely drinkable; quite quaffable.

Hazy, golden yellow in colour. White head is 1/2 inch on the pour and recedes to a thin cap with lots of lacing down the sides.

Flavour is pretty much the same as the aroma. Citrus, herbal, lemony with hints of malt.

Easy drinking and goes down smooth. Not overly bitter or hoppy. Medium bodied and moderately carbonated.

A really nice pale ale. Not overly complicated but well balanced and smooth. Drinkability is off the scale.