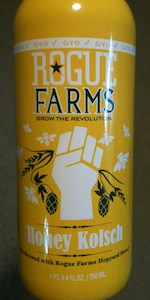 Notes via stream of consciousness: Another non-Köln-style beer. Kölsch doesn't have honey in it, so don't call it a Kölsch. Rant over. It's poured a hazy golden orange body with a bit of an orange sheen to it beneath a massive head of dense off-white foam. Kölsch is always clear, just to note. The head appears to have great retention, and now that it's dropped a bit, it looks like it'll leave some great lacing behind as well. The aroma is fruity and floral and suggests that the beer might be a little sweet. The flavor displays honey, which is really nice, and it's not overdone. There is some sweetness to it but I don't think there's too much there. It doesn't seem like it could ever become cloying, even after a full serving, and to be honest there's some bitterness that lingers in the finish. The fruitiness includes apples, peach, berries, dried apricot, and pear. There's a subtle bit of acidity to it that helps it to finish dry along with a moderate bitterness. That's really nice! Again, it's certainly not a Kölsch but what can you do. In the mouth it's medium bodied leaning towards medium-light, and gently crisp. In the end I'd say that hedonistically it's a great beer - it's nicely balanced, well rounded and polished, and fairly unique - and I'll rate it that way because as a Kölsch it fails on multiple levels and the final score wouldn't really give you an overall idea of what the beer is just based on the beer itself.
Review #6,784

Pours with a slight haze and creamy head of white foam. Pillowy and fell lovely and slowly like a summer day. First nose shows me some honey but that seems to fade. Soft sweet hop. Woody earth. Faint cool herbal. And the lightest dry scent of honey that seems to have fled to the top. A faint fruity ester apple. The bread on the nose is lightly golden. The taste is powerful with honey. It has a substantial breadiness and finishes malty and breaddy. The honey is pretty dominant in the flavor though. It still does not add too much sweetness and the malt is crisp . Not so much bitterness but balanced well. I would say that in this beer the honey has given a little contrast to the light tang that should finish the beer. Your mouth still waters but it is a little heavy. Some residual sweetness in the finish but it held together very well. If you have it you will know what I mean and then notice the hop bitterness offsets the honey aftertaste. If you are drinking a beer where you can taste the restrained fruit quality of the bittering hop then the hops were used well. In this one it's citrus or if I had to name a fruit, orange peel. So in this one yes. The hops are alluvial hops and they demonstrate terroir because they are specially grown on rogue farm and only in their beer. The little of bit of wheat they put int he beer meshed well with the honey too . They preserved the mouthfeel and finish of the kolsch by using acidulated malt to accent that in the finish and that imo also allowed the authentic taste of the honey to come through. It puts a bit of sour in the beer via a small proportion of lactic acid and that gave your mouth to water at the finish but did not make the beer truly sour. carbonation is bubbly. A small bubble with a small bite which also puts a little something into the finish and lightens the sugar so medium dry. I really enjoyed this beer.

An American kolsch style beer made with the addition of honey. Now if my scores look low let me explain. Its too bubbly for kolsch, it has a strong flavor in it and the finish is different but good enough for me. The honey is brought out well . And like a rogue it used the allowable amount of wheat. The hops are exquisite and so the honey flavor did change the style in the finish. The score I gave is actually high. This brewer used clever innovations to bring you this beer .

I want to like this beer. Attractive bottle, but the beer is just lacking in taste.
With such packaging I was really expecting to taste something special. I read the narrative of the process and ingredients, but sorry boys, you better take a trip to Germany to learn how it's done. This is no better than my own attempt at home brew. Drinkable but just.

Look: It pours golden and clear with a slightly off white head. head retention is good.

Smell: It has a grainy sweet aroma with some cracker. It is a bit flowery and floral with honey.

Taste: It is grainy sweet and the honey is more noticeable in the flavor than in the aroma. There is light cracker with some flowery elements. It also has a low herbal quality.

Overall, the honey does create an interesting take on a kolsch.

Straw yellow color, medium white head, lot of residual foam in the glass. Sweet aroma to it. Touch of some spicy hops up front, mellowed out by the sweetness from the honey. Some fruity esters on the finish.

Rogue makes some of my favorite beers, but I'm not a big fan of this one. Probably just the style. I enjoyed it as I do all beers.

Poured from a can, hazy golden honey color. Sweet fresh flowery honey smell, Taste follows with a fruity citrus tang. A creamy feel, overall I loved it and will look for it again.

Fairly standard Kolsch and very easy to drink. Not much of a honey taste. Not one of Rogue's bests but not bad either. At $12 a 6pack it's a bit pricey for what you get, though.

Drank from a 12oz bottle. Brewed sometime in 2017. The beer has a fresh hoppie smell. The beer is slightly bitter with a moderate sweet aftertaste the taste of honey is just noticeable. I was expecting a fuller honey taste. Overall its a decent beer and it's flavorful enough that it's enjoyable. Though it was below my expectations the more of it i drink the more I like it