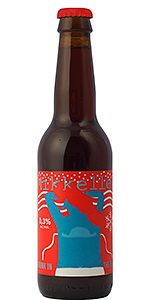 3.55/5  rDev +6.9%
look: 3.5 | smell: 3.5 | taste: 3.5 | feel: 4 | overall: 3.5
at .3% alcohol by volume, this was always going to be a little weird, but I love the mission, and want to see more breweries take this on. its pretty dark and thick, cloudy amber and heady, but not overly appealing in shade. it smells like red apples, or more like apple cider, mild mulling spices, sweet red malt, and the orange peel. first sip surprises me because this isn't all that sweet. its not like they brewed a normal beer in terms of gravity and just cut off fermentation early, they obviously used late runnings or a really light malt bill to generate such a low abv. the coriander and orange seem high for what else is going on, almost over spiced, and that apple flavor is not my favorite. that said, its a cool mission, and probably the most flavorful beer this low in alcohol out there. not sure if its low enough for the NA drinkers to enjoy, but its a step towards some better beers for that crowd. I much prefer the drinkin the sun they do in the summer, light and hoppy, but there really isn't anything else like this on the market, and its a great addition to the advent calendar box.
Dec 21, 2015
Rated: 3.38 by dcmchew from Romania

Reviewed by u2carew from Massachusetts

The smell is malty with some sweet wort and floral hops. Lots of butterscotch and caramel. Some spicy notes in the background.

The taste is quite dry with porter-like roasted malts. Some bitter hops and notes of dark rye bread. Plastic off-flavours in the background. Medium body. The aftertaste adds some anonymous spices, more rye bread and a smooth bitterness. Molasses and ginger snaps in the dry finish.

The carbonation is medium strong, the many mid-sized bubbles long-lived. The liquid is semi-smooth.

Not as spicy as I had expected. No wort flavours either. One of the better low-alcohol beers I have had.