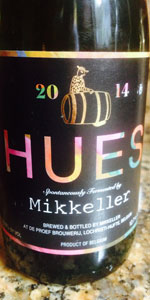 Bright and colorful, the aptly named sour ale bursts onto the beer scene with a clean and crisp profile that keeps the palate wanting more.

Hues pours with a bruised goldenrod color. Its translucent shade casts aside any head character with ease. With the nose hovering above, jaw-locking and mouthwatering aromas of dry white wine, cider and citrus delivers a plethora of acidity to tingle the senses. Its dry taste thwarts aside any sweetness as only a skim and wafer-thin bready note perceptible.

With the ale creeping over the middle it sourness unleashes- an off-vinegar flavor penetrates the mouth with ease; carrying with it those elements of crabapple, under-ripened berry, green grape, tangy cranberry and dried lime. More earthen spice opens up as well with musty cork, weathered wood, leather, peppercorn and husken rye to give the taste balance, complexity and a solid piquant character.

Light bodied throughout, dryness is celebrated from start to finish as its sheer acidity strips the thirst from the palate and ushers in a highly refreshing taste. Leaving the mouth with sharp astringency and the ironside taste of sea brine.

APPEARANCE: No gush upon opening.

Head comes out as a thin off-white cap of 2 minute retention. No lacing as it fades.

Body is a clear honey gold of average vibrance with no visible yeast/lees within.

Looks decent for a gueuze, albiet far from special.

AROMA: Spot-on for the intended style, with obvious acidity and a neutral (wheat and pilsner) malt core. Barnyard notes of straw/hay, green apple, and wood. It seems a bit heavy on the young lambic - which is to say it's not sour enough. There's plenty of wild yeast funky twang in there, but little sourness (sourness is maybe a 3/10 in terms of intensity). Not too cereal-emphatic, which is always a risk even in what many consider to be the best expressions of the style.

Aromatic intensity is light. I detect no hops or overt alcohol.

TASTE: Meets the meagre expectations created by the aroma, failing to bring enough sourness to the table or to commit fully to evoking oak, but going heavy on the style's signature barnyard notes and funky twang. Heavy on apple cidre vinegar and green apple. Generally well balanced albeit lacking in terms of depth of flavour and intricacy. I do like it, but it doesn't capture the barnyard subtleties and the nuances of spontaneous fermentation as fully and expressively as the style demands.

Flavour duration is above average. Flavour intensity is true to style.

OVERALL: While it comes closer to nailing the style than the vast majority of non-Belgian attempts at it (De Proef not counting as strictly Belgian per se here given Mikkel's oversight), Hues is ultimately an underwhelming brew in a style that's extremely difficult to master. While superior to the expressions of the style put out by lambic producers with bad reputations (not to name names, but, well, fuck it...De Troch), it won't dazzle discerning drinkers familiar with the best the style has to offer from the likes of Drie Fonteinen and to a lesser extent Tilquin, Girardin, and Cantillon.

this is awesome stuff, thanks to my brother for saving it for me, we really kicked this holiday week off right with this beauty. it looks orange and surprisingly clear for what it is. cant hold its patchy white head longer than a few seconds, but its still pretty in the snifter. it smells amazing, best feature for sure, sharp mature wild yeasts and acidity, fruity as can be, and funked out to the max. smells old and even blended, done evolving, like an old world gueuze, and I think it says as much about de proef as it does about mikkeller. impressive depth of flavor here too. it starts with sharp lactic acidity and moves to a malty middle where a little more than just pale white wheat comes out. a slight crystal malt richness without the sugar, and then some peach and even pear notes before the yeast flavors dominate. its a little medical, numbing and that kind of wild, but in a real good way. is this blended? seems to have that young and old lambic synergy going on. working in tandem. the funk is real too, it comes on late with the wood, which has vanilla and white wine aspects to it, and farmy musty rustic and strange to close. incredibly impressive beer, worth the steep asking price if you like lambic types. mikkeller does it again! this is the absolute epitome of spontaneous beer. it can be different, but it cant be better I don't think...

Reviewed from long-standing notes. Poured from the corked and caged 375mL bottle into an El Catador teku glass. I wrote down that I drank it on 8/11/14, but that can't be right since I also marked that I bought it at a local bottle shop on 8/15/14. Based on where the review is written in my notes, I believe the correct date of consumption would be 8/11/17.

A: Up front - there is not much "pop" as the cork is removed. Pours a mildly hazy darkish gold with minimal visible carbonation. A small white head forms but disappears quickly.

S: Tart lemony citric acid, barnyard and funk, and oak tannins. Some vinous character and notes of stone fruit/apricots. The oak character grows as it warms.

T: Moderately sour up front – mixed lactic, citric, and less acetic acids. Vinous with dry oak tannins, and lemons and apricots. Cracker malts with just a hint of toast. A mild funk (less than the nose) on the back end. This finishes dry between the oak and tart acids.

O: A fine beer, though nothing mind-blowing. A nice but not overbearing level of sourness that's balanced by the dry tannins. Some subtle fruit flavors, though I don't believe this is a "fruited" gueuze. This doesn’t do much particularly wrong, but it just kind of exists next to you as you drink it. I’m sure I would likely regret what I paid for it if I could remember what that was, so likely I won’t be doing it again. But it’s just north of fine.

Most of the hype that's in the commercial description is missing from what I tried. Aroma was tart, bit of fruit, and oak. Taste was mostly sour with some oak and a tiny bit of sweet in the finish. There was a very short lived head that is now totally gone. Basically, it's an ok sour beer.

Cork pops quietly, emits a wisp of gunsmoke. Pours placidly, with an accumulation of foam, but not a substantial head. Fizzles away after a minute. It struggles to show much carbonation, and gives the impression of an unblended lambic. Color is on the darker side of orange, verges on copper.

Aroma is slightly metallic at first, bummer. As it warms, some nice citrus and oak comes through to redeem it. Oak character is unique, likely a result of the Hungarian oak barrels used. A light nutmeg spice and vanilla becomes present, some sandalwood and lemon pith.

Lemony and oaky taste, fully lactic and citric, puckering and clean. Tart verging on sour. No acetic acid present, no vinegar notes. Approaches the profile of a traditional Gueuze, and certainly more enjoyable than some of the mid-tier ones out there. Supple feel with a mellow carb level, tannic and gripping dry finish. Nice stuff, I think this may be better than most of the Spontan- series i've tried, it has a little more nuance and complexity going on.

Hues is allllmost great. The initial pour and aroma are superb, deep, complex funk, lemons and bright peach notes. On the palate this is just a hair sweet, which gives this a slightly flat sweet/sour dynamic. It's excellent and very drinkable, with hints of oak and cognac, but a bit more depth and complexity would be welcome. I'm hopeful enough I plan to pick up a few more bottles to set aside.

Very easy drinking with lots of flavor. I am impressed Mikkeller could brew a 'gueuze' this well.

Poured from the bottle into a tulip glass.

Palate matches with a good amount of the barrel showing up. Good round feel, coating everywhere, with lots of tart fruit. Hints of lemon and tart melon strangely if I could put it that way. Good juiced body with even some malt doughy bakery qualities on the finish. Definitely bringing more acetic qualities and leaving the sweetness behind that was hinted on the aroma.

Thanks a bunch to Dan and Emma for sharing this with me in my new apartment.

A- Bottle split to three snifters. Mid-gold hue to the body with a small white crown. The head reaches up to just a small layer with lackluster retention. A few spots of lace stick around.

S- Funky lactic bacteria and Brett with quite a bit of sour vinous grapes bringing on the fruit continent of the beer. Joining this is lemons, medium oak, barnyard, apples and some spice.

T- Sour vinous, white grapes really break out here to make up a large portion of the flavor. Obviously there aren't any grapes added but it comes through similar with an apple feel as well as lemons and tons of lactic acid. Oak, barnyard funk, slight acetic acid, green apples and a slight spiciness.

MF- Dried out and toward the high side of sourness with a low-medium carbonation. Texture is silky and slightly foamy. Finishes with a burning sour feel.

On the high side of the sour range with a lot of green apple and white grape fruit character paired with oak and some heavy funk. The acidity sort ends up being dominant to most of the other flavors.

Pour is darker golden orange with a small amount of larger bubbled white head. Nose has a faint dusty leathery brett, a bit of acetic acid and notes of plastic, a touch of lime, heavily citric acid and notes of tangerine. Flavor is muddled, lightly acetic, heavily bretted which really dulls out the flavor, seltzer and leather mixed with some citric notes in back. light body, extremely assertive carbonation, slightly grainy feel.

Pours a golden hue with a fluffy white two finger head and sporadic lacing, smell is oak, funk and white grapes all the usual suspects I expect, feel is medium bodied with lively spritzy carbonation with tastes of white grapes, sour meyer lemons but not too sour, oak and finished with a dry funkiness and overall another well executed brew by the man cheers.