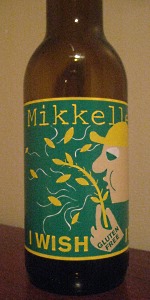 BODY: Dark brown-orange colour of average vibrance. Nontransparent. Nontranslucent. No yeast/sediment is visible within. It's a fair bit darker than most beers in the style. Not great-looking as a result, but outside of style conventions it's a nice appearance.

No alcohol, off-notes, or overt yeasty notes are detectable.

Complex enough for the style, but not real subtle or carefully handled.

TEXTURE: Slightly coarse and dry, actually, giving it an unrefreshing presence on the palate. Medium-bodied. Drags a bit, suffering from a rough feel. Slightly overcarbonated.

OVERALL: Drinkable but forgettable. To its credit, it's one of the better gluten-free beers I've had, but frankly that isn't saying much. I wouldn't get it again, and it's terribly overpriced for its quality. I'll concede it's above average overall, and great for gluten-free drinkers. The hop choices and caramel malt backbone do play well to the winter IPA motif.

Amber pour, really hazy. Creamy light beige head, finger and a half thinning down slowly.
Smells of sour rather than sweet citrus (lemon and underripe orange, faint tangerine and blood orange), faint pineapple, pine, grassy hops, a bit of caramel over some grainy biscuit.
Starts with the bitter kind of citrus fruit, with grapefruit, sweetish pomelo, orange peel, with a faint sweet tropical underneath, enhanced by the bit of caramel. Gets dry, bitter and coarse, with a grassy and grainy mix, kinda like multi-grain crackers with hemp. Some pine and leafy hops in the finish, with an extra kick to the bitterness.
Medium body, medium carbonation. A big green leafy bitterness in the aftertaste and almost nothing else, except for a subtle hint of fruit.
There's a certain "tampering" involved, mostly with the malts, but i can't really point it out. A simple, leafy dry IPA, wouldn't mind picking this one up in case i find out i have a gluten sensitivity (or worse). Until then, plenty better IPAs out there.

330ml bottle, with some appropriate label imagery illustrating the blowing off of grains from the stalk. Also, this is apparently still made with pilsner, Munich, and Caramunich malts, so this must be one of those post-brew cycle chemistry experiments, in terms of its gluten-free status.

This beer pours a mildly hazy, medium rusty brick amber hue, with a teeming handful of puffy, frothy, and loosely foamy off-white head, which leaves some decently consistent snow rime lace around the glass as it evenly subsides.

It smells of sharp, yet dank pine needles, a musty, acrid leafy bitterness, stale orange citrus, bready, crackery pale malt, a touch of caramel sweetness, further muddled tropical fruitiness, and a bit of floral perfume. The taste is more of the same - bitter leafy, herbal, piney, and dank hops, wet biscuity pale malt and toffee-accent caramel, and more indistinct, but pleasant enough sweet tropical and citrusy orchard fruit notes. I'm pausing now to reflect on the fact that there's nothing else to write about the flavour here, to my surprise and relief.

The carbonation is quite understated, to the point of the perception of absence at times, the body a low-grade medium weight, and plainly smooth, the hops barely making a dent here, but not helping, either. It finishes fairly dry, piney and herbal, with the various fruity esters and grain bill skulking away into the night.

A rather impressive worldly (in the hop sense, at least) IPA, full-stop. As for the malt, it performs as well as the majority of other decent IPAs out there do - supportive, moderately sweet, and no weird off-flavours. Yup, this reeks (in a good way) of gluten reduction, as opposed to starting G-F in the first place. Fine by me, usually the former turns out better anyways. And this isn't yer usual - seek this out if you want a heady IPA, without any gluten play.


I Wish Gluten Free IPA from Mikkeller ApS
Beer rating: 84 out of 100 with 19 ratings