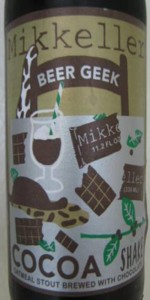 When you were a kid, and you put too much cocoa powder in your milk, and you stirred up the lumpy mess and drank it- here's the beer.

Reviewing Cocoa Shake, a new variant of the infamous oatmeal stout from from Mikkeller out of Copenhagen, Denmark.

Appearance: Pours an inky black color with a wisp of brown head that quickly and totally settles. Has a denser appearance with less head than the other Shake beers I have had, somewhat akin to Bourbon County Brand Stout. Swirling the brew lightly tints the sides of the glass with its brown oily legs. 4.5/5

Taste: Luscious waves of chocolate coat the palate, like a cold, rich glass of milk chocolate hot cocoa with a good bitter finish. Has a touch of dark fruit on the midpalate, with some raisin flavor that bleeds over in the finish as it warms up. Quite a delicious chocolate-forward brew, albeit somewhat simplistic. 4.5/5

Mouthfeel: Medium bodied, and seemingly less viscous than its vanilla counterpart. A touch over-carbonated for the flavor profile. Has a mildly bitter finish, and develops a bid of an astringency as it warms up. 3/5

Overall: A pretty damn good beer with a mouthfeel that could use some tinkering. If this had the mouthfeel of Vanilla Shake, it would be on par qualitywise. This one was definitely worth trying.

Served chilled into a Guinness goblet and allowed to approach room temperature over the course of consumption. Expectations are high given the brewer - who's likely my favourite. Reviewed live as an oatmeal stout per the label.

HEAD: Brilliant shining complexion - amongst the best I've ever seen. Rich tan colour. The consistency is a bit thinner/less robust than would be ideal, but it's sufficiently creamy for an oatmeal stout. Appears soft. Recedes to a floating ring within 1 minute, and fully within 3. No lacing coats the sides of the glass as it recedes.

BODY: Predictably, it's a solid black - not quite an ink or jet black, but dark and opaque. No yeast can be seen.

Looks like a dessert beer, absolutely. Spot-on for the style with a special head. Quite inviting, though head retention could be improved.

AROMA: Vivid expressive notes of chocolate & cacao nibs, with faint suggestions of coffee and a perfect dark & chocolate malt-induced sweetness. God, that chocolate is good; there's a lot going on.

It's rich and milk chocolate-forward without ever coming off too sweet or evoking unwanted notes like Whoppers or Hershey's syrup. Nails the style, but never betrays its ABV. I find no off-notes or overt yeast character.

Aromatic intensity is below average, helping to suggest a dessert beer that is nevertheless restrained and subtly executed. Certainly an enticing aroma.

TASTE: Delivers on the cocoa shake premise, with dialed-in notes of cacao nibs, rich milk chocolate, expressive chocolate malts, luscious cream, and vivid dark chocolate. It never gets too Hershey's syrupy or cloyingly sweet, cleverly avoiding an overt caramel presence. It's not the most intricate oatmeal stout I've had, but damn does it try. Subtle suggestions of marshmallow, cocoa shavings, and maybe even coconut?

Where this beer succeeds, is, unsurprisingly it's chocolate character - which transcends the one-dimensional shallow cheap candy bar character often found in American beers brewed with chocolate, opting instead for a very expressive and balanced European chocolate character. It's a dessert beer, yes, but it's never too saccharine. Very well balanced, though I'm not sure how they managed to tame that chocolatey sweetness without the use of overt roasted barley, coffee roast, burnt notes, etc.

Well built, embracing its premise. Depth of flavour could be better still, but flavour duration and intensity are ideal. I'd like more of a coffee roast/roasted barley character to lend this still more nuance, but it's already well-executed.

TEXTURE: The silky smoothness provided by the oats is well used here, emphasizing the creaminess of the milk chocolate without making the beer too thin, weak, or porter-like. It's robust, with perfect thickness, heft, and weight on the palate (which is to say all three attributes are moderately high, without ever making the beer overbearing). The sweetness in this beer requires a full body for support, and it's provided. Slightly chewy, with a supple soft feel on the palate. Some very subtle dryness in the late second act cuts the sweet milk chocolate, replacing it with a crumbly vibe that plays into the cacao dusted nib character I love so much in the flavour profile.

Carbonation is perfect. Alcohol presence is shockingly well-disguised; this drinks like it's maybe 6%. Not oily, gushed, hot, boozy, astringent, harsh, scratchy, or rough. Overall presence on the palate is good.

This texture helps bring out the best in the taste, serving the beer nicely. There's a loose harmony of texture and taste.

Some might by inclined to call this syrupy, but it's really not; its viscosity is near perfect.

OVERALL: It's a rich dessert beer, but as cohesive and enjoyable as it is, this build isn't quite gestalt. It's definitely a sipper - more for the richness of the chocolatey taste than any noticeable alcohol - but drinkability is what you'd expect given the style and premise. I've preferred Mikkeller's other, more intricate beer geek series stouts, but this was well worth trying and I'd happily enjoy it again. A treat in its style, and one hell of a boundary-pushing oatmeal stout in spite of its shortcomings. Additions of roasted barley and/or coffee/java notes might push this into the next level.

More solid work from a brewer too often shit on by short-sighted Americans who blame him (instead of the Shelton Bastards) for its price point as an import.

the beat goes on with this super weird and intensely flavored series of beers. i think i prefer the vanilla to this one, its integrated a bit better, but this is great beer and demands to be tried. i looks and feels like liquid chocolate, super thick and dense, not unlike the others. the nose is all cocoa powder and a fairly sharp vegetal thing that may not come from hops, really hard to figure it out there. the taste is literally like a mouthful of cocoa powder, even almost as dry for a moment before the sweet malt kicks in. its really syrupy in texture, and is near as authentic as any chocolate in any beer i have had. like a youngs or something but not as sweet and twice as thick. i swear there is spearmint or something in this, the label has me thinking with all the green leaves on it, and that sharpness could easily be mint, there is just so much cocoa and roast here its hard to tell, but i agree with others that have commented on it being vegetal in that way. really glad to be sharing the bottle as this one is in some ways a bit too much for me, i would drink maybe half a bottle, its so intensely flavored, almost more liquor than beer, but thats mikkeller for ya, getting as far out there as scientifically possible. i keep on supporting the mission.

Poured from bottle into chalice at Brasserie V.

L: Practically zero head outside of a thin rim of mocha. No light penetration.

T: Oh, wow. That is immaculate. Like biting into juicy chocolate covered dark fruit, emphasis on the fruit. It has many of the same flavors as BCBS, without the bourbon barrel aging, and without the sticky residue of BC. A deep, dark chalky bitterness in the finish. Warm, boozy feeling at the tail end.

F: Thick and frothy in the mouth, not in the glass. Wonderful. The barman said it falls short in the "shake" descriptor, but if it does, it only does barely. Really, really nice.

O: Very, very tasty. I prefer this to its vanilla counterpart. Really delicious.

Tried this at a dark beer festival last year, and it was amazing. Smooth and milk chocolatey like a chocolate shake, easy on the booze. Bought a refrigerated bottle today and Yikes! It was not the same beer. Smelled okay, mouth feel was smooth, but taste was nasty and soured. No chocolate at all. What the hell happened?

The pour : Wow, this stout is VISCOUS, it's almost syrupy coming straight out of the bottle. Oily and jet black in appearance. Managed to form about a finger of dark, burnt caramel colored head with a very heavy handed pour, but with the viscosity and the massive 12.2% ABV that it boasts, the head didn't stick around very long. As it warms, I get smells of syrupy molasses, tons of chocolate, almost to a fudge level, a bit of alcohol, honey, licorice and fennel and a dutch chocolate icecream aroma. Extremely thick, syrupy and sweet on the nose, definitely an occasional beer and may be offputting to some with its immense sweetness. The taste, holy hell, this tastes like I took heavy dutch chocolate ice cream and milk, blended it and drank it. Tons of bittersweet chocolate with sweeter fudge, VERY thick and creamy mouthfeel. This is a dessert in a bottle. It's a very slow sipper and will make you feel full after one, but makes a fine dessert beer. Final score - 9.4 / 10

A: Pours jet black and was completely still. No head at all.

S: Aroma is distinctly Mikkeller, so much so that I wish I had smelled it blind because I feel I could have guessed the brewer. Some of that classic marshmallowiness that I find in so many Mikkeller stouts. Loads of chocolate to back it up.

T: Very sweet right up front. This one has notes of milk chocolate and chocolate fudge blended with some marshmallow and maybe even a little almond. Very nice, if not a bit too sweet.

M: Surprisingly not as thick as the appearance would have suggested. Not overly coating on the palate but certainly not light either. A decent fit.

O: A nice brew from these guys. I might even say my favorite of what I have tried thus far in terms of stouts from Mikkeller. Worth seeking out and at the very least trying!

I loved this beer. It pours nice and thick like syrup, and tastes like straight up chocolate. Tons of chocolate on the nose and taste. This is really nice, but I did get a slight metallic taste on the finish.

Mikkeller Beer Geek Cocoa Shake one of my top favorites out of the Beer geek series. Pours nice and black like an imperial stout and of the bat chocolate is definitely present. gave it a higher rating because i wasnt expecting this from Mikkeller.