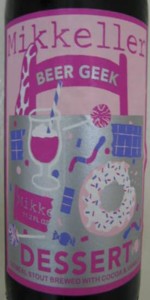 330 ml bottle, Cardinal Pub & Bar, Stavanger. Pitch black colour, moderate tan head. Fairly moderate roasty aroma, notes of coffee, cocoa and vanilla. Impressive flavour, distinct notes of French roast coffee ( = not as smooth as Beer Geek Brunch Weasel), also distinct notes of cocoa and vanilla. Would like to sample a version of this one matured on oak barrels. As it is, it is still a very good beer.

330 ml can from back pre COVID in 2019. Pours a thick deep black with a thin fine tan head
Nose is chocolate and a whack of vanilla - there is a mild roasty note, and almost a hint of strawberry.
Richly malty - sweet chocolate and layers of vanilla - again a bit of berry on the palate; dark fruit and a slight caramel flavour finishes - there is just a little earthy bitterness at back, but sweetness dominates.
Thick, rich and sweet mouthfeel with the feel of a chocolate dessert with strawberry cream beside.

I had it several years back & it was done with great perfection on sweetness & flavours living up to its title. Would be nice to try this now after several breweries flood the market with these decadent stouts these days.

More malty and hoppy than sweet

12oz bottle poured into a snifter.

T: Opens with a lot of roasted malt- woody, bit of black coffee, roasty, kiss of smoke. There’s an earthy/piney hop dimension too. The cocoa and vanilla begin to really set in on the mid palate. Big estery complement of raspberry too. It is all a bit reminiscent of a raspberry sundae. Bitter hop bite returns and sets in on the long finish.

O: It’s a little bit of a confusing beer, and the desserty side of it clashes with the more bitter aspects brought by the hops and heavily roasted malts. They probably should’ve dialed back a bit on the latter and let this go more into “pastry stout” territory, especially in this day and age. It’s not a bad beer, just a little disjointed and not quite as advertised.

Reviewed from notes. Poured from the 11.2 oz. bottle into an El Catador Barrel-Aged glass.

A: Very dark brown and opaque, with a thin tan head that recedes fairly quickly for a stout. A low amount of visible carbonation.

S: Dark chocolate and cacao nibs make up the biggest portion of the aroma, but it's less of a punch-in-the-face than the chocolate-only version. Vanilla, roasted malts, and tobacco. Oatmeal and mild char, and some caramel as well.

T: Dark chocolate, pipe tobacco, and roasted malts. Vanilla that’s pretty sweet but not quite Yankee Candle territory. Oatmeal, caramel, then mild char again. Dark roasted bitterness, oatmeal fullness again, and mild caramelized malts as well. The roasted bitterness is almost substantial enough to stand up to the sweet flavors of chocolate and vanilla at the swallow, but the chocolate wins out.

M: A nice full body for oatmeal stout. Low but as-expected carbonation sensation. The alcohol presence is quite well-hidden - I don't think it tastes double digits at all.

O: Tasty, but I think the chocolate version was preferable to this one. This still has the dark roast and char flavors, but the chocolate stands out less and is replaced but the quite-sweet vanilla. The vanilla isn’t overly artificial, but when it pokes its head above the chocolate and char it’s as a really sweet flavor - probably too sweet. Certainly not bad but I don’t think it was worth the price of admission.

Shiny, gloopy ink black with a large, air-bubble pocked mocha foam that quickly settles to nothing but a thin ring.

Smell is sort of artificial, like an instant brownie batter mix, with dark chocolate chips and vanilla frosting.

That cloying vanilla frosting is present in flavor too, with a goopy dark chocolate that leaves minimal room for beery flavors. There's a sort of cherry almond in the swallow, and only the slightest hint of roast. It's tasty...but also difficult to drink much of. Ergo, the 16 ounce format is ill-advised.

This is quite sweet, sharp and sticky with an almost acidic sort of booze. A mild velvety fizz tries to mitigate this, as the finish is semi-dry with a sting of heat on the way down. Why is the average score for this so high??

Look: Typical dark black Mikkeller stout with no head and a dark tan rim that leaves bubbly residue up the sides.
Smell: Wow! Very sweet. Notes of licorice, cinnamon, red velvet cupcakes, and laundry detergent.
Taste: Surprising presence of a smoky malt character in addition to notes of dark chocolate and blackberries. Very acidic. Just a hint too sweet.
Mouthfeel: Dry on the entry and finishes with a full bodied presence and minimal carbonation.
Overall: Too sweet and strangely acidic but the smokiness and dry full bodied mouthfeel elevate this beer.

Pours pitch black with a thin ring of tan head and no lacing. Smells and tastes of cocoa, coffee, vanilla, roasted malts, dark fruits and a bit of char. Medium to heavy bodied, minimal carbonation, fairly sweet but not crazily so, slightly chalky finish. Very good bit not worth the price as compared to other beers.

S- bold dark roasted/charred malt aroma up front with compliments of dark fruity notes of fig, prune & black cherry. Undertones of both cocoa and vanilla pop through the roasted malt, as well as hints of caramel & vanilla icing

M- medium-heavy body with moderate carbonation leads to a thick and creamy mouthfeel that continues into a velvety silky finish, just a hint of alcohol warmth

O- more dark fruit than I was expecting, not my favorite of the series but still very good

Cloyingly sweet, had to drain-pour after about half a glass.

I was baffled by how thick this beer is - literally, it poured like a gloopy glass of mud. I don't what all was in there - I drank about half of the glass, and then started getting strange clumpy stuff on my tongue. While what I drank was delicious and wonderful, I don't think I'd buy another bottle - when you have to dump half of it, there's something wrong.