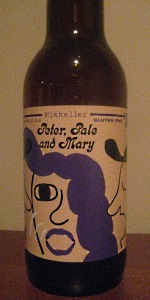 Poured to a tulip.

A: The body is orange and very hazy having a bright coloration that gives it a very tasty look. The head is white and half a finger thick that shows good retention. No lacing though.
S: The aroma is composed of a weak malty backbone and a fruity, apple-like, big aroma profile. It's look Bell's Oberon with a big apple-y punch but yet it's not that much prominent.
T: The taste, unfortunately, is very bland. The citric begining is almost absent and the hoppy profile that could give this an APA statement is also gone, giving this beer a very watery taste. Sad to say the least.
M: Body is medium low. Carbonation is perfect. Alcohol is unnoticed. Bitterness is weak.
O: One of the saddest beers I've ever had from Mikkeller. Looking forward to try the one with gluten to find any differences.

Very enjoyable ale from a great brewery. Great mix of hops and malt with a lovely finish

The colour is amber (20 EBC), the liquid got some haze. The three finger head sinks with a fizzing sound to a finger thick airy yellowish head. Some lacing occurs.

The smell is hoppy and bitter. Some dense sweetness in the background. Green plants and unripe fruits. Lime juice and hints of dough.

The taste is semi-bitter with passing stale sweetness. Some floral notes, unripe fruits and wheat flour. Medium body. The aftertaste is harsh with decreasing bitterness, wheat dough and bitter herbs. The finish is harsh with sweet biscuits and tree sap.

The carbonation is strong, the mid-sized bubbles sharp on the tongue. The liquid is mid-smooth and harsh.

I would recommend this APA to be consumed quite cold. Not that bad for a gluten free beer, though.

330ml bottle, the gluten-reduced version of their recent Peter, Pale, and Mary offering, coming in at <20 ppm.

This beer pours a slightly hazy, pale copper amber hue, with three pudgy fingers of puffy, bulbous, and generally fizzy ecru head, which leaves some sudsy layered lace around the glass as it lazily sinks away.

The bubbles are pretty understated, barely a tickle to be had for my blue-balled tongue here, the body on the lee side of medium weight, and plainly smooth, a nascent creaminess arising as it warms. It finishes off-dry, the grainy, lightly sweetened pale malt doing well to linger amongst the remainder of the hoppy citrus and pine cone day.

Sort of a barely dumbed-down version of the base APA - the hoppy character is just not quite so robust. However, for a gluten-avoiding project, this one still comes out all right - enough going on to keep any and all fans of hoppy pale ales interested and strung along.