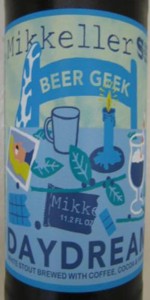 Pours a murky, dark orange color with no head at all.

Smells of vanilla accompanied straw and caramel glazed malts. Has a profound earthiness underneath, with a pleasant amount of dusty coffee, completed by marzipan.

Drinks completely flat, which is fine, due to the bigger body of the beer. Features a very different looking and tasting stout, since this has an unusual thin mouthfeel, while producing a cloying sweetness during the beginning, which turns a tad dryer at the finish.

Tastes of rock sugar, vanilla bean and a soft coffee dryness, producing dough malts and sugared cookies. Coffee brings a nice, spicy punch to the palate, with cardamom and cinnamon, perfectly blending into the malts. Finishes creamy with spices being still on the palate, soft, with a dry touch from the coffee.

Very unusual for an imperial stout, not only regarding its color but also its other features. Its coffee presence is way less pronounced than in all other beer geek variants, with the unusual lack of carbonation producing a sweetness which makes the beer pretty one dimensional apart from its vanilla spice accent.

12% ABV. Imported by the Shelton Bastards.

Served chilled into a snifter and allowed to come to temperature over the course of the live review.

HEAD: ~1 finger wide. Off-white colour. Somewhat creamy, but still inadequately so. Somewhat soft. Consistency is even. Complexion could be better. Not the rich expressive dark tan one hopes for in a great stout (white or otherwise), but passable. Retention is good for the ABV - ~5 minutes. Leaves a nice thick coating of lacing as it recedes.

Appears well-carbonated. It's darker than any other white stout I've tried - which I think actually works against the style. It looks more like an IPA than anything else, actually. I find the yellow of other white stouts more appealing personally, but such details seem unimportant in this nascent style.

AROMA: Creme brulee. Odd spice. Pronounced coffee/java notes; the coffee character here is much more interesting than it is in most coffee stouts. I'm not finding the cocoa at all. Some char.

Aromatic intensity is average. Brilliantly, this never betrays even a hint of booze - contrary to its high ABV.

TASTE: Characterized by an odd almost herbal hop-redolent spiciness, this makes for an odd white stout build. Its best feature is definitely the coffee/java. The vanilla is barely present, but combined with the char it almost evokes a barrel-like flavour. I find no cocoa. The malt backbone is puzzling; I'd guess English pale malts mixed with some chocolate malt? I detect no roasted barley.

It's nicely put together and isn't imbalanced, but it never quite comes together in such a way that it truly seems like a gestalt whole of a flavour profile. If not imbalanced, then unbalanced.

It's not oily, gushed, hot, boozy, astringent, harsh, rough, or scratchy. Has a good overall presence on the palate as a result.

Constructively, it has some bothersome coffee-like acidity that really doesn't belong.

OVERALL: There's no harmony of texture and taste here, but the beer is surprisingly drinkable for its 12% ABV. No, it's not on par with other beers in the Beer Geek series - many of which I count amongst the best beers I've ever had - but I'm glad I tried it once, and would likely buy it again at more reasonable Danish prices. A worthwhile addition to Mikkeller's extensive lineup, but ultimately a bit of a let down in terms of its style; I much prefer most of the other (and admittedly few) white stouts I've tried.

A hodgepodge of disparate disharmonious flavours that hides its ABV well. Call it an additive ale.

Coffee character is subpar at best; it's barely present. Not as sweet as I feared, which is good. Not a dessert stout, nor really truly a stout.

Mediocre fare from a brewery whose Beer Geek Series was a major contributor to my getting into beer in the first place.

Overall - A white stout is a tricky character. This is better than Butcher and the Brewer's in Cleveland.

Appearance is clear darker golden body, with a hint of brown hue, half finger white head that fades quickly; not much lacing. Smells odd, mostly of cocoa and some fusel alcohol, earthiness, vanilla bean astringency. It's strange and it just doesn't seem to work. I keep expecting to smell milk chocolate and some toasted grains, it's almost as if it's an incomplete beer. Flavour is similar; the blonde base doesn't seem to contribute as much to the entire "stout" experience, it altogether feels like it's missing something. There's vanilla, cocoa, and even espresso which didn't come up on the nose, but I seem to be unconsciously looking for chocolate, roasted malt, toasted grains, but it's not there and I don't see what has replaced it. A fair bit of alcohol heat as well. Mouthfeel is medium bodied, lower carb, a bit difficult to drink due to the heat and the lack of accompanying flavours that I think would otherwise distract me. Overall, it's different, it's weird, but ultimately it's just lacking in too many departments to be considered more than a niche beer.

Poured from a 33cL bottle into a glass at Mikkeller Bangkok.

Lustrous, hazy gold with no head. The nose is mint chocolate, like an Andes candy. Hahaha what is this flavor? It's kind of nice, but it's a lot. The odd mintiness doesn't dissipate, and there's also lots of vanilla and powdered cocoa. Depressingly little coffee. The mouthfeel is malty sweet and a bit flat (though emulating a stout, I guess it would have to be). Overall, it is a strange experience that I think suffers from an over abundance of additives.

I've heard of the so-called "blonde" or "white" stouts, and considered homebrewing one at one point, but I've never actually come across one. Darker amber color, oily, with a small layer of bubbles on top. Maybe I was hoping for too much when I expected to close my eyes and smell/taste a stout here despite the deceptive appearance. But really this didn't resemble a stout in any way shape or form. Or smell or taste or feel. The only distinct flavor I really got was burnt marshmallow. This was not for me.

The oxymoron that is the "blonde" stout is a play on both the eye and the palate; tricking our psyche with the flavors of robust, dark and roast attributes although the aesthetics of the ale are light.

Daydream pour rather mid-amber rather than golden, building a cap to sell the appearances of pale ale. But with the nose hovering, the scent of deeply roasted coffee, burnt toast, dark chocolate and campfire makes the senses do a double-take. As deep toffee, honey and nutty flavors ensue, the malt sweetness overshadows the roasty contrast of the nose rather easily.

And as strong vanilla, cream, fruit and confectioner's sweetness unfolds on the middle palate, its coffee, cocoa and searingly sweet tastes remain firmly in control. Although the sweet cream, vanilla and candied taste never allow the roastiness of stout to command its balance, its striking how "dark" the beer tastes with its lighter appearance.

As the sweet and spicy finish looms, the vanilla, marshmallow and cream flavors remind the taste buds of "circus peanut" candy while roasted cashew, spicy booze and a vodka-like strength attempts to dry the full-bodied taste with tepid success. Aftertastes of vanilla and caramel extend onward but is also plagued by its egregious and unsupported fusel heat.

Bottle from Tipples. Pours deep orange color with a small off white head. Aroma is very smokey, with a hint of roast, chocolate, and coffee. Taste is very peaty and smokey, some light chocolate notes, a bit of vanilla. Dry body, plus carbonation, pretty heavy. I can't say I'm a huge fan here.

the beat goes on with this crazy series of beers. this one is a collaboration with siren, who has impressed me so far, and its a blonde stout, all the new rage. its got coffee and cocoa and vanilla and all of that going on, and its super oaty, or so it seems, with all kinds of frothy body and sweetness, but this is one weird brew. its hazy and thick, and the alcohol is insane in it, hot in the finish, but pretty well hidden. also its a major deviation from the rest of the series, being pale and all, but its also weird with the coffee, stale almost, not as rich and earthy and fresh seeming as the others, which hurts it for me. the nose is the best feature, where the cocoa and vanilla do most of their work, and where the weird confluence of ingredients has yet to manifest itself. i just dont think some of these flavors suit a pale beer, you almost need the chocolate malt and the heavy roasted barley to make them assimilate in, and they never really do here, although i must say, i love the beer for one main reason, and thats the same reason that has endeared me forever to mikkeller, and that is that this is entirely one of a kind. its ahead of its time, a revolutionary if you will. these may eventually catch on, but i will remember this as the first real bold attempt at it, although i am aware others also exist. this is the first one to have a context and to mean anything to me. a little too strong and a little too sweet, a beer to share, but a very cool project and a complete unguided adventure for the palate.

Golden hazey amber
s:very light hint of cocoa and Vanilla not get any coffee
T: it has like a baked good taste or maybe even a pb&j
F: has a stout mouth feel.
over all happy I tried it but wouldn't go buy more at 9.99.