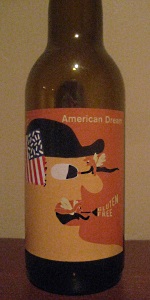 Plays big with the hops. Hides its lager credentials and fuller than 4.6% (Is there wheat in here?) Basically, invents the IPL. 3.75

330ml bottle, part of a relative slew of new gluten-free re-imaginings of existing Mikkeller products, coming in at less than 20ppm.

This beer pours a clear, bright medium golden yellow colour, with four fat fingers of puffy, densely foamy, and mildly creamy off-white head, which leaves some sudsy layered cloud lace around the glass as it very slowly sinks away.

The carbonation is average in its fizzy and frothy emanations, the body on the lee side of medium weight, and generally smooth, a minor flinty affectation nosing its way in. It finishes quite dry, and very pilsner-esque, with the crackery malt and grassy, mildly gassed-up hops.

Like the other few recent G-F offerings I've tried from Mikkeller, this one hardly differs a whit from the base beer, which leads me to suggest that it uses the enzyme-based removal method, which is validated by simply looking at the ingredient list on the label, I suppose. A distinctly recommendable selection for those old-school Pils lovers who want (or preferably, need) to avoid a full-on gluten frontal.


American Dream Gluten Free from Mikkeller ApS
Beer rating: 85 out of 100 with 14 ratings