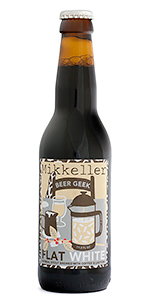 Draft at Brewdog Doghouse Edinburgh. Dark brown with a soft, bubbly tan head. Aroma is sweet and coffee. Taste is coffee, bitter, chocolate, mild sweetness, milky notes. Bitterness up front, then a lazy simmering of all of the flavors. Creamy.

Bottle: Poured a black color stout with a large brown foamy head with good retention and some lacing. Aroma of roasted malt with some bitter chocolate notes also noticeable. Taste is dominated by dry roasted malt notes with some bitter chocolate notes with light lactose notes also perceptible. Body is about average with string carbonation. Enjoyable stout but more bitter then I was expecting with lactose not showing up as much as expected.

Poured from 330 mL bottle into snifter. Cap stamped 03/05/27 (I assume best buy date).
A: Pours a very dark brown with 1-2 inch thick dark mocha head with excellent retention.
S: Boozy dark roast malt, medium roast coffee, and a bit of cream/milk. Baker’s chocolate and a bit of spice.
T: Super smooth dark roast coffee with cream. Dark bitter chocolate and a bit of spice (reminds me of chicory).
M: Medium body. Extremely smooth and velvety feel. Darkly sweet and bitter with some softening/balancing from the lactobacillus.
D: Not complex, but doesn’t have to be. Excellent representation of a flat white, but also bordering on New Orleans style coffee.

From the bottle in a snifter. This mighty brew pours a
nice and rugged coal black with fantastic head of brown foam
that subsides to a thick ring, thin dusty layer, and sports some very nice lacing.
Nose of cream (lactose), mild coffee, and dark cocoa with touches of char.
Flavors fall in line with the nose nicely with mellow oats and cocoa
dunked in a flavorful cup of coffee with cream and moderate char and
dark roast. Nice mouth feel; medium full verging on a full body,
smooth in the English sense, lightly slick, coating, and light carbonation.

A: Poured from the 11.2oz bottle into a pint glass. The beer is a pure black color with a creamy brown head that lasts a good long time.

S: Chocolate and cafe au lait, vanilla, and some spice.

T: Mostly sweet with a creamy chocolate character. Kahlua/Irish cream underneath and a hint of vanilla.

F: Smooth overall with a bit of dryness in the end.

Overall: This was a tasty beer but a little sweet. Definitely a dessert beer.

A: Very dark brown to black, and opaque. A minimum of visible carbonation leads gives us a thin to non-existent tan head (or at least a ring of foam).

S: Coffee and chocolate, roasted malts and tobacco. Mild lactose and a touch of vanilla. Pretty roasty, and certainly not overly sweet.

T: Chocolate and coffee, and a big roastiness to the malt body adds a good bit of bitterness up front. Tobacco and burnt (but not acrid) caramel. Mild lactose, and the vanilla sweetness swells up more towards the end. There’s a little yeast estery sweetness that’s not entirely welcome near the end. But more dark roasted coffee with attendant bitterness overshadows that at and after the swallow.

M: Average heft to the body - not as heavy as it looks, nor as much as the others I’ve had in this series. Low carbonation sensation, and the alcohol presence is fairly low.

O: Probably my least favorite of this series, though not a terrible beer in as of itself. The heavy roast buries the coffee a bit, and then the sweetness comes with a tinniness that shouldn’t be there. I’d pass on this one in favor of the rest.

Smells of roasted malt, vanilla, coffee, cocoa, milky, has kind of a barrel thing going on; smell alone says that this is stronger than 7.5% abv.

Roasted malt and vanilla up front, pretty strong coffee after my initial judgement, lactose brings sweet notes but it's offset by coffee bitterness. Lactose throughout.

Close to full bodied with medium carbonation. Taste, like the smell, impresses me like in something stronger than 7.5% abv.

Very enjoyable but not at that price point. One and done.

330ml bottle - glad that I passed up an expensive pour of this at Beer Rev a little while back.

This beer pours a solid black abyss, with the scantest of amber basal edges, and three fingers of puffy, finely foamy, and somewhat creamy brown head, which leaves some decent dissolving back windshield ice pattern lace around the glass as it slowly and evenly subsides.

The carbonation is average in its palate-satiating frothiness, the body a heady medium weight, and generally smooth, with a small airy creaminess arising once things warm up a tad around here. It finishes trending dry, an indistinct bitterness helping stave off all those lingering mixed sugary essences.

Overall - I've never had the titular coffee-based beverage, but I can say that I am enjoying the Stout version. The cuppa Joe character isn't overbearing, allowing the well-made base beer to shine. Worth seeking out, for java aficionados and agnostics alike.

This is a most excellent beer. Creamy and delightfully smooth feel. Carbonation is minimal, but sufficient to give texture to the body. Taste is of dairy, cocoa, chocolate and vanilla. I'm surprised this "only" gets a 3.92 as I view it as pretty much the perfect oatmeal stout.

I honestly don't know why I can't not buy a new Beer Geek, they've done enough of these, but here I am.

Pours like a dark stout with a good firm head, but it doesn't last particularly long. It leaves a smearing of lacing on the glass, nothing to get excited about and given 7.5% more could have happened.

Roasted malt, coffee grinds, finishing with lactose, some vanilla (not sweat), cream, and some fruity citrus notes that I might get from hops or perhaps from a lighter roasted coffee.

Nothing special on the body. It's carbonated well enough and it has some body.

As oatmeal stouts go, this one is good. It lacks any real stand out characteristics and I really would like less lactose and more roasted character or perhaps a richer and creamier mouth feel with a bit more sweetness from the lactose. The net result doesn't make me think of a foam topped dark roast coffee as I'd hoped and instead gives me the impression that someone put enough milk in my coffee to change the flavor but not enough to really do much for it either.

The killer is the 7.49 price tag for a 330 ml bottle. Had this been under 5 (it is imported) I might have a more favorable impression. As it is I'd still give it a go on draft and thank anyone offering it, but I won't buy another bottle.

Mikkeller! [YAY!] Beer Geek! [YAY!] Flat White! [YAY!] All of those statements are things that I love, and in the case of “beer geek” - something I am. I have much love for Mikkel Borg Bjergsø, the man, the myth, the gypsy brewer who can seemingly turn any ingredient into beer. The Beer Geek series has also been the most popular series of beers Mikkeller have released, winning awards from pundits and critics alike. So when a can of Beer Geek anything pops up in my local bottle-o (Black Sheep Newmarket), then that sir is one instant buy for me. One might even call it - an “instabuy” in the vernacular of the Interweb, or even a “shut up and take my money”. Indeed.

Poured from a 500ml can into a Duvel tulip.

A: Wow, OK, lotsa head right here - mocha coloured, all 2 inches of it. Body presents deep dark opaque brown coloured, like the murky depth of the Mariana Trench (aka the deepest part of any ocean on earth). Gets dark down there. As the head crumbles it leaves an almost nitro-like lace on the glass side, impressive. 9/10.

S: Hard not to smell this beer with its pervading dark chocolate and roasted espresso coffee overtones. Hints of vanilla and a smoky char in there as well. As far as breakfast beers go (i.e. beers brewed with coffee) this is par for the course. A touch of nutty character comes through in another whiff too. 8/10.

T: Much like Beer Geek Vanilla Shake the flavour comes through like a big honeyed kiss all over your tongue - coating it with a rich gooey goodness, and coffee, lots of coffee. Flavours as expected: Dark chocolate, roasted espresso coffee, nutty mid-palate, vanilla and a hint of smoke. Flavours come through quite sweet and sticky with enough bitterness in the finish to balance it out. I reckon this brew is so similar to how I remember Beer Geek Vanilla Shake being that this must be the base recipe on which that brew is formed. Spot on, just missing the milky character of a flat white though. 9/10.

M: Not quite as viscous as Beer Geek Vanilla Shake, at half the ABV though (7.5% versus 13%), it’s still pretty heavy-bodied with a creamy carbonation. 8/10.

D: Such a top effort from Mikkeller - this is another feather in their cap (which must have crushed Mikkel Borg Bjergsø to death by now due to its weight). The flavour hit is BIG and unyielding, it’s actually a much bigger beer than the 7.5% ABV would suggest, but it’s hard to go past a brew this tasty. 8/10.