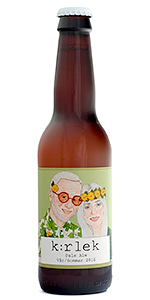 330ml bottle, a bit late for the Spring/Summer of 2016, but what the hell. I still have no freaking idea what the name of this series of brews really means.

The carbonation is fairly prevalent, in its palate-taunting frothiness, the body a so-so middleweight, and mostly smooth, with a very underwhelming, but appreciable all the same, airy creaminess arising as things warm up a tad. It finishes trending dry, the hops doing well to wrest that metric away from the base malt (which I suppose has its own problems, of a sort).

Overall, this must be one of those G-F offerings where the 'horrid' barley or wheat has been scientifically removed of those dastardly glutens, as opposed to starting gluten free in the first place (not recommended!). The best thing that I can say about this brew, is that I only thought of that concept at this veritable end point - faint praise, I know, but praise all the same.

The colour is gold (8 EBC), the liquid got some chill haze. The two finger head is off white and firm; some lacing occurs.

The smell is bitter, almost sour with citric notes of lemon juice and lime peels. Some candy sweetness and hints of yoghurt and matured cheese.

The taste is quite dry and bitter with lime juice, lemon acid sourness, some lime peels and lactose in the background. Medium body. The aftertaste is even more bitter with insipid sweet notes, hints of paper and white bread. The finish is sweet and sticky.

The carbonation is strong, like a lager. The small long-lived bubbles are fresh. The liquid is semi-smooth and somewhat sticky.

The worst beer so far in the K:rlek series.