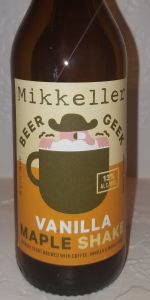 Notes: Brewed at Lervig in Norway.


A: Pour an exceptionally dark black, and thicker than motor oil. Head is the darkest mocha brown you can imagine, 2 plus fingers width that has decent retention before dissipating down. Leaves essentially no lacing but some alcohol legs. Right up there with Marshal Zhukov for the darkest beer I’ve ever seen in a glass. Beautiful beer. 4.75

S: Wow there is a lot going on here. Maple is the first thing that I get, its very very sweet. But then other notes come out with the vanilla and coffee. Roasted malts balance the sweetness beautifully. Goddamn. Essentially perfect aroma. 5

T: Taste is very good but doesn’t live up to the nose. Its much, much more roasty on the taste, and way less sweet than the aroma implied. Vanilla remains fairly prominent, maple much more subtle. Fair amount of black coffee bitterness. Some leather and tobacco notes to round it out. 4.25

M/D: Mouthfeel is full and thick. Carbonation is appropriate. ABV is very well masked and drinkability is quite good all things considered. 4.75

O: Excellent beer. Will definitely enjoy again in the future. 4.5

Reviewed by ScruffySouthpaw from New York

Appearance: Deep thick dark brown with an extra dark tan head rising roughly quarter of an inch off the body.

Smell: Light maple syrup you have to let the beer sit for a while before even.

Taste: Literally tastes like pancakes and espresso. Sweet bitter and lightly Malty. You can feel the maple syrup with the coffee bean lingering.

Mouth: it is very very sticky the maple finish offsets the coffee and it just lingers with you. Body is completely full medium carbonation at best might dim a little bit after letting the beer settle to room temperature.

Overall: personally I would buy this again again and again it is 1 of the most complete imperial stouts I have had but it is definitely an acquired taste the abnormal sweetness to the beer my confuse people and might make people refrain from buying it so to each their own. Always in a glass. Salud!

Rated by joaopmgoncalves from Portugal

4.3/5  rDev +0.5%
look: 4.25 | smell: 4.25 | taste: 4.25 | feel: 4.25 | overall: 4.5
im not sure that this is different beer than the canned one from the san diego brewery, maple and vanilla are reversed in the name, but the biggest difference might just be that one of them is made in the states and the other in europe, and if that is the only difference in the beers, than there is no comparison between the two, and there is really something that needs to be said for freshness and location mattering even in dark huge beers like this. the can from san diego was a league more robust than this, both in maple and vanilla, and the coffee tastes fresher as well, this doesnt seem faded, and in fact its amazing beer, but it doesnt taste anywhere near as heavy on the adjuncts as the california one did, like, not even close. here we have maple leading the way in front of the aromatic vanilla, with quite a lot of sweetness but plenty of bitter chocolate character from the malt, and a pretty well hidden alcohol strength for how big this is. heavy body, textured like maple syrup, less coffee than i want it to have, but we had it in line with several more coffee heavy beers, which may have skewed my palate away from appreciating that aspect all the way. its super cohesive and the one thing i will say for this over the other one is that i think i taste more of that cool mikkeller ale yeast, nordic and interesting, i dont really know how to describe it, but its unique to mikkeller and a few others, and i get more of it here than i did in the san diego can. great beer, somewhat more subtle too, but flavorful and delicious, as good as any big stout from mikkeller! oddly enough though, we had this next to the cocoa edition, and that one was as intense as this one was from san diego, so maybe there is something about the can vs the bottle here...
May 01, 2018

Rated by WOLFGANG from South Carolina

The nose is dominated by maple: sweet, and more than a touch woody. Touches of coffee and roasted malt can be found in the background. The nose improves as the beer sits in the glass, becoming sweeter and more inviting, evoking images of a plate of eggs and bacon on the side.

On the palate, it's far less sweet, and doesn't really suggest being a big, thick, 13% imperial stout. There's some sugary syrup coming through, but far stronger is the woody aspect of maple, arriving in the first third and building well into the back half. Bitter, with notes of chocolate and coffee riding along. A little bit of smoke as well on the finish. If the vanilla is ever present, it is only on the very front end, and perhaps lingering in the back.

A touch fizzy, with a touch of heat reminding you that this is, indeed, a potent brew.

This is a very interesting brew, and not quite what I expected. The strong wood aspect mid-palate is somewhat unpleasant, and definitely overpowering. Plenty of brewers have experimented with maple stouts, and most have found success (often commercially, as well). This attempt, while not a bad beer precisely - and drinkable enough - does not seem to fall into that category.