Not Just Another Wit
Mikkeller ApS 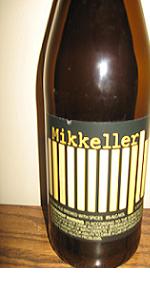 The smell is intensely of oranges, sweet and bitter ones, and coriander.

The taste has a sweet fruity start, then freshly squeezed orange juice with a dash of ripe lemons, the coriander spiciness is balancing, and with a slight alcoholic touch Curaçao comes to mind. A nice bitter ending.

O: The best witbier I have ever tasted.

Reviewed by janubio from Spain

3.84/5  rDev -2%
look: 3.75 | smell: 4 | taste: 3.75 | feel: 4 | overall: 3.75
this is a darn good witbier. the best of al the wit types mikkeller makes I think. totally orange, like biting into a fresh orange through the rind, its citrus max out, and its awesome. the coriander seeds and other weird ingredients are far less influential, its the orange that jumps out at me, although this also has two other really unique features. one is that it is super strong for the style, far from sessionable this thing packs a punch, and its pretty well hidden, unknown even, sneaky strong. the other thing is that its mighty hoppy. good mix of northwestern and European hops, grassy and piney and bitter and oily too. it brings the most out of the orange, or rather the orange brings the most out of the hops. its an impressive brew overall, with lots of body from the wheat and oats, and a ton of carbonation, lively and jazzy. its the kind of wit I would brew myself to break out of the conventional wit stagnation that has plagued the style for a decade in America. this is much needed, and wonderfully executed. one of the top beers in the mikkeller advent calendar so far!
Dec 20, 2015
Rated: 3.94 by Vylo from New Jersey

Reviewed by JLaw55 from Missouri

4.5/5  rDev +14.8%
look: 4.5 | smell: 4.5 | taste: 4.5 | feel: 4.5 | overall: 4.5
Probably one of the best witbiers I have ever had. Full bodied and fresh. An abundance of wheat, but not thick or overbearing. A light, airy, 2 inches of white head starts and slowly shrinks to noticeable lacing. Great citrus flavors really bring this one alive, with orange, lime, and lemon making it really pop. A nice crisp finish really makes you want to come back for more.