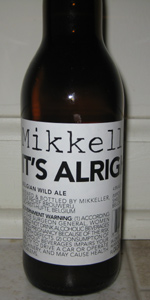 Pours a golden color, thin head on it, puffed up to around 1" but it settled at about 1/8". The aroma was more of the pale malt than anything else. Didn't smell brett, hops or sourness out of it.

Taste was like a session pale ale, but with an attempt at being bretted out. Didn't really taste like that. The overwhelming majority of session beers I've had have been really hoppy. Here, you didn't have much of anything going on. No off flavors though. I dunno, like, because the beer is a session strength one, are there no fuel/fermentable sugars to push the brett around?

Mouth feel deals with a level of carbonation that exceeds the norm. Slight floral soap like note to it, but it doesn't detract from the beer's drinkability. This beer, the name, well, story checks out! Given the price of Mikkeller beers, I can't say I would recommend this to anyone, but also, I've had a lot worse beers that had much higher ratings than this.

Slightly hazy golden color with white head. Aroma has funky yeast notes similar to a lambic but not as intense. Fermented fruits, a bit of sugar and some grains. Taste is quite clean though, a bit yeasty, mineral, slightly grainy, some pungent hop bitterness on the finish. Light to medium body, medium to high carbonation. Quite nice table beer, easy drinking yet with an interesting character.

The colour is brown-orange, the liquid cloudy. The low head is white.

The smell is yeasty and somewhat bitter-hoppy. Brett notes makes me think of Orval.

The taste got notes of Brett, too. Stable, dough, herbs and tart green bitterness. The overall flavours are milder in the aftertaste with peppermint, dried fruits, hay/stable and tart herbs. The long finish is somewhat sour with some green herbs.

The carbonation is strong, the large bubbles are long-lived. The liquid is light and smooth.

A funky and pleasant beer, but it is a bit unfocused.

Pours a clear light yellow brew, with some lambic-like head. Smells like a Belgian pale ale, with its characteristic yeast, plus some feint funk, lime, lemon zest. The taste is something between a berliner weisse and an unblended lambic, watered down a few times. It's alright for a warm summer day, I guess.

No clue of the age on this one.

Aroma is grainy and slightly musty, with a hint of Belgian esters of peach and green apple. Flavor is fairly lacking. There's an underlying touch of menthol and lime, which leads to a moderately bitter finish. Effervescent carbonation lifts the flavor from the palate before it really sets in. Malt is lightly toasted, but subtle. Very odd.

T - Way off. Soapy, foamy flavors dominate the profile. Touch of pear, seltzer, and apple peel, but it's not enough to save the beer.

my very first mikkeller!!!
pours a golden hued, semi-topped liquid.
smell is Belgian yeast, typical Belgian ale aroma.
taste is.... Belgian yeast.... candied sugars.... eh, it's alright....
overall.... it's alright.... typical Belgian flavored ale. so, if you click to all the beers mikkeller brews, then sort on the ratings, it's. like, THE LOWEST rated brew from them.... I guess it can only go up from here??
it wasn't bad. my 2 year love affair with Belgians is over. just way too rich. I still respect them all, but the ol' standby germans are particularly appreciated at this point although ive been bumping around with several other different things. still, I get the mikkeller concept. interesting.... cheers!