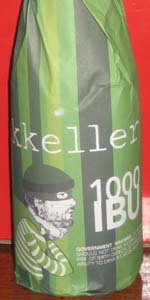 Amber color, with coppery reflections.
Quite hazy, not very clean.
Foam with a good hat, but that wears off pretty soon.
On the nose, herbaceous notes, wood and earth.
In the mouth bitter pungent at the beginning (pine needles, herbaceous notes and even a little bit of unripe fruit) excessively rounded, for my personal taste, with a malty body that brings out evident "biscuit" notes, caramel and honey.
Of true bitterness there is only the first impression as soon as drinking begins, after which the malty part is the master.
At the end of the drink a slight bitterness remains on the tongue, biscuit notes prevail on the palate.
Honestly, I expected more, given the circumstances.

Howler from Keg n Cork in Edmonton. Pours a gorgeous deep near clear copper colour with scant cream to light beige head.
Aroma caramel malt, tangerine, mango, pine, brown sugar sweetness, and a sense of hoppy booziness.
Taste starts caramel malt sweet, citrus, piney hops, sweetness on front end, but hoppy bitterness hammers and builds and hangs in the palate.
Full sticky bittersweet mouthfeel, decent carbonation with persistence of the bitterness. Not in any way subtle but fantastic in its own way.

Dark amber color with a thin tan frothy head.
Smells more sweet than bitter
As noted by others, this more strongly resembles a barley wine with a bitter aftertaste. But initially the malt sweetness takes hold.

A year old. Very bitter, there is maltiness too but it's not for me.

A 330ml bottle, with a best before date of 21st September 2019. Poured into a Lost Abbey teku glass.

Appearance: A hazy dark copper colour with quite a lot of very small suspended particles, a two finger beige head that had good retention and left behind lots of nice sticky lacing.

Overall: Not bad, but it’s not exactly what I want my DIPA’s to be like. Approaching like a Barleywine and on the verge of being too sweet in my opinion. Once is enough for me.

Well, here we are! #1,000! Woo-Hoo! *releases streamers and balloons from ceiling above of everyone who reads this review - at great cost I might add - instantly* And what better way to celebrate review #1,000 than with Mikkeller 1000 Eye Bee U? Only it’s not my 1,000th review! Psyche! This is my 999th review. Truth is I was suggested Mikkeller 1000 IBU by some great people on BeerAdvocate, but in the meantime I found something better TBC soon. However now is the time for Mikkeller to shine. I’ve reviewed 5 Mikkellers so far, it would have been more but they’re both hard to get and expensive in Australia. One similar theme is concurrent with my 5 Mikkeller beer reviews: they’re all tasty. Expect the same from 1000 IBU.

A: I was actually so surprised by how dark this beer was during the pour that I spilled some of it. Hazed deep caramel body - that can’t possibly be right!? I marvelled at the dark IPA as a beige head swirled into a non-existent patchwork of thin bubbles. This is a seriously dark IPA, and now my left wrist smells of beer. 7/10.

S: It smells like a rich resin run off from a bucket load of hops. Aroma is hop forward with notes of piney, resin, forest floor, juniper, hints of bitter orange... essentially the aroma of a hop bomb with little disregard of any malt base. Hey, it’s what to be expected from a 1000 IBU beer - which in case you were wondering is actually measured by the amount of hops added to a beer, not the end result: which is why some beers can say “30 IBUs” and taste stronger than a “200 IBU” beer BTW. 8/10.

T: Very hop-driven beer, though it’s got that real raw and earthy/grassy hop character that you get in a hop tea (hops in boiling water). It’s not as nuanced as I was expecting from a Mikkeller beer. The flavour is quite raw and unfinished IMO, it’s like a dare beer that Mikkeller didn’t develop further. Those piney, forest floor and resin flavours make it in too. Finish is drying, there’s very little in the way of malt flavour (caramel), with a final medium bitter orange hop note. 7/10.

M: Decent body (thanks oats!) mid to heavy with a creamy/dense carbonation - it’s heavier than most DIPAs at 9.6% ABV or above, plenty of hop oils too. 9/10.

D: Coincidentally this beer is my intro to Mikkeller IPAs, and it was shocking to see how dark it was, but overall it was disappointing as it’s such a hum-drum American DIPA, there’s not much to see here, and the craft of Mikkeller’s other brews is lost in this, all-in-all it feels like Mikkeller did this 1000 IBU on a dare. 7/10.

Well that is one dark ass IPA! While pouring, I thought this was going to be dark amber, but it fills to muddy copper and even brown, and has a very active, zealous and large khaki head, which is about fist thick, settling uncannily frothily, like an A&W root beer float, leaving layer after layer of sticky, fuzzy, curly thick khaki lace.

Smell is a very complex and potent bouquet that nears the Devil Dancer and Barleywine territory of flame licked grapefruit zest, wildflower, herbal potpourri, pine sap, resin, deeply scorched caramel, pine bark, orange liqueur and a hint of rug. It's a lot of fun detecting all that insanity all at once, but at the same time, nothing is attractive.

Taste is sharp and harsh, and this certainly is bitter, but not the most bitter that I’ve had. It’s actually more flavorful and potent than bitter, but not in the best of ways, including notes of pine and resin, and pine resin, and pine needles up the ass, as well as burnt resin. But honestly, other notes are able to breakthrough, such as grapefruit and orange, both the zest and pith, as well as a mouthful of bitter flower petals and sharp unidentifiable notes most closely resembling wild herbs, all backed by caramel-toffee and ruggy malt.

Poured into a Seattle Beer Week pint glass. Pours a medium to dark bronze amber with a fine two finger off-white head with great retention and thick lacing. Aroma of deep caramel malt, piney and citrus hops, brown sugar, very close to an American barleywine or triple IPA profile. Flavor is caramel malt, citrus and piney hops, lemon and orange citrus, brown sugar; reflects ths same profile as the aroma. Finishes with citrus and light resinous pine hop bitterness. Medium bodied with nice creaminess and mouth feel. This could just have easily been labelled as an American style barleywine; it has all the caramel malt depth and solid hopping of that style. Very malty and some interesting flavors in the hops, although the hop flavors are not that herbal. The finish is robust, but not quite at 1000 IBU, which is a good thing, I think. I suspect this would age well for quite a few years just like a barleywine. I'll probably pick up another bottle to check that out. Rich and enjoyable. Not as scarily overhopped as the name implies.

Bitterness is in full bloom with this beer. Unsure about 1000 ibu, but it is way up there for sure. Dark to caramel in color, off white head. Nose carries the ibus as does the taste.

A 330ml bottle with a BB of Sept 2017. Purchased ages ago from the Brewdog webshop - I think I've had this for over a year. The label calls it an American-style imperial IPA; as the name implies this is stuffed with hops.

A: Poured into a Duvel tulip. Bottle conditioned. A deep reddish-marmalade hue with low carbonation and tons of floating sediment. Yields a large head of creamy off-white foam that lasts for a minute or two before reducing to a persistent surface layer.

T: Tastes of insanely powerful hops with notes of pine resin, citrus peel, grapefruit, sweet caramel malt, mild brown sugar, ale yeast, vague earthiness and more than a touch of booze in the background. An overwhelming hop-driven bitterness upon swallowing, along with a malty sweetness. Impressive but not sure it quite lives up to its name.

M: Mouthfeel is smooth and thick, with tingly hop oils and soft carbonation. Good body for the style. Aftertaste of bitter pine-laden hops and sweet malt.

O: A solid mega-IPA, though not quite the 1000 IBUs of the name. Looks OK; carbonation could be better. The aroma and flavour are stridently hoppy, backed up by plenty of sweet malt. Nice body. In character it resembles an American barleywine; I'm not sure if this is the intention or partly the result of age-related hop fade. However, it remains a hop-head's delight. Lupulin lovers should try it if they can.

F: The fullest bodied IPA I have ever tasted.

O: Hoppiness and bitterness to the extreme. Good beer!

Some citrus notes buried under a scorching bitterness. Interesting but over-the-top!

Deep caramel aroma to start. There is a pleasant floral nose that only hints of hop behind.

Much stronger bitter presence in the taste. The malt is brief and mild. The hop is straight up bitter without any distinctive subtleties that I've come to expect from Mikkeller. The aftertaste is very long and bitter in a lip smacking sort of way. Creamy body with an adequate carbonation level.

Taste, well it definitely delivered on the high ibu claims, but is that something to brag on? Much better beers with lower ibu ranges, especially in the ipa category, something Mikkeller has always had a hard time with, much less providing one affordably. This is no different. Way too expensive to justify a return excursion. Just a big hot, bitter bomb of a beer. So much caramel and toffee.