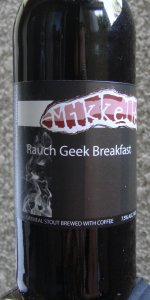 Notes: A smoked version of the Beer Geek Breakfast.

T: I have had over peated crappy mikkeller beer this is not one of them. Peat and smoke out the ass in this one, but it melds nicely with the lesser components. Rich chocolate and coffee.

D: Pretty good. I really like it. Solid brews. Happy Bday to me. Thanks Bosse for sending this one across the pond.

Burnt coffee bean black with nary a glimmer of lightening at the edges. The melodious sound of beer entering glass was thickly creamy... which is exactly how the caramel nougat colored lid looks. It's also beginning to blast all surfaces with thick sheets of shotgun-shredded lace.

Rauch Geek Breakfast does not smell like bacon. Smoked malt is numero uno, but doesn't dominate at the expense of dark chocolate, java, and all around roasted malty goodness. Just like (plain ol') Breakfast and Brunch Weasel, this Beer Geek should impress mightily on the palate.

Still no bacon... and no sausage either. This offering is basically the original Breakfast with smoked malts in place of the base malts. Mikkeller did not go overboard at all, but calibrated the smokiness to dovetail perfectly with the rest of the beer's flavor profile.

Sweet and bitter are balanced on a razor's edge, as are bittersweet chocolate, roasted coffee beans, wood smoke, and hints of vanilla bean. This expertly crafted ale is pure pleasure to drink and was well worth $9.99 for 500 ml. Not that I'll be drinking it often.

Mouthfeel is the only (slight) chink in the armor. That makes sense since BG Breakfast suffered the same fate. That said, good is only a misstep when the rest of the beer is very good. Laid back bubbles neither help nor hurt.

Rauch Geek Breakfast is yet another tasty treat from one of the best breweries on planet Earth. Brunch Weasel is still king of the Geeks (and is a much bigger beer), but this smoky little number isn't far behind.

Split a bottle with my wife in our NYC hotel.

This beer appears a deep shade of black, with hints of brown only detectable at the crest when held up to the light. The beige head is surprisingly small and recedes quite rapidly, leaving only faint traces of lacing. The aroma is remarkably similar to the non-smoked version, Beer Geek Breakfast, as the smoky aspect is more subdued than I would have guessed. The beer has a nice flavor, with roasted and burnt malt taking center stage. The smoke flavor is a welcome addition, and integrated nicely. The body is medium-thin. There is noticeable bitterness in the finish from the charred malt that lingers in the tongue between sips. This is a good beer and worth trying. It's a nice variation of the original.

Mouthfeel, solid medium, nice and creamy. The relatively low abv is nowhere present.
Thought this was pretty good, better than the hop one but not as good as the first two.

On-tap at Leon's in Atlanta, the American version is sold as Rauch Beer Geek Breakfast.

Pours black with a one-finger brown head. The head recedes into a thin layer on top leaving solid lacing.

Smells of smooth roasted malt, smoked malts, coffee, and dark chocolate, in that order. The smoked malt aromas intensify a bit as the beer warms.

Tastes very good. The smoked malt flavors aren't as intense as the nose intimates, instead favoring moderately roasted malt flavors that kick things off. Joining in shortly thereafter are good amounts of smooth dark chocolate flavors that segue into smooth, lightly roasted coffee. Hints of smokiness work their way into the flavor profile before fading out into a solidly bitter ending.

Mouthfeel is very good. It's got a smooth thickness with grainy carbonation.

Drinkability is also very good. I finished my glass quickly and could easily have a few more.

Overall I was a fan of this beer and thought the smokiness was well done. It didn't overpower the beer and instead augmented what is already a nice beverage. Worth a shot.

Poured from 500 mL bottle into snifter.
A: Pours a beautiful heavy, smooth black with large 2-3 inch frothy dark mocha head. Good retention. Decent lacing.
S: Toasted grains, medium roast coffee, smoke, and a slightly off bittersweetness.
T: Smoke (not the nice wood type, but more towards the cigarette type), dark dry chocolate, medium roast coffee, and a hint of sweet cream.
M: Light-medium body. Burnt smoke lingers on the palate (in a semi-unpleasant fashion). At turns sweet and bitter. A backbone of oatmeal smoothness.
D: I think they went a step too far with smoking such a dark brew. The smoke clashed with instead of complimented the darker qualities (coffee, chocolate, etc.). An interesting beer, but not the best Mikkeller out there.

Jet black in color with a massive cocoa colored head that is creamy as hell and has undeniable retention. Loads of lacing around the glass as well.

Huge smoke smell fills the nose. It literally smells like fresh cooked bacon. Smokey and meaty with hints of charred wood. Pretty dry smoke smell. Not getting much else.

Big time smoke up front. Dry charred wood with light bacony bit notes. Getting the roasted coffee beans on the back end with a touch of vanilla bean. Roasty malt and char linger into the long finish. I really wish this had some sweetness to it to compliment the smoke. Nearly all smoke here with hardly a trace of sweetness. Still nice though.

Velvety smooth and soft carbonation. The body is medium and very smooth as well. Dry and smoky finishing.

A hugely smokey beer that lives up to it's name. This is definitely not for everyone, but I absolutely love smoked beers and this one fits the bill. I will have another.

A: Poured from a bottle to a pint glass. Had a black color and an impenetrable texture. There was a massive, creamy, tan-colored, long-lasting head. Surprisingly average lacing.

S: The smokiness of this beer overwhelms the smell, but there are traces of coffee and malt.

T: Like the smell, the taste is dominated by the smokiness. There is some coffee, malt and chocolate, but it's in short supply. Not a bad flavor, but not as balanced as I would've liked.

M: A generally well-carbonated beer with a very dry and smooth finish. Medium-bodied.

D: While this is an uneven and inconsistent beer, it still has a good drinkability.

Two finger milk chocolate colored head with little retention on a jet black body. Aroma is a little off putting. The mesquite aroma is more like Raid insectacide by my nose. I cant get much else from it. When drinking the flavor actually makes the aroma better. The flavor is a very nice smokey, mesquite, bacon taste which is actually mellow and not over done making this one of the more drinkable beers in this genre that I have had. Thick body and moderate carbonation. I know my rating is high but for the genre this is excellent.

Dark black with a dark brown two finger head. Has decent retention, and a little lacing. The aroma has chocolate, coffee, smoked malt, but no bacon. The smoke is not as strong as I had hoped.

The first thing I tasted was the smoked malt, followed by coffee and chocolate. The smoke is not as strong in this beer, as it is in other smoked beers. There is nothing in the flavor which suggests bacon, or any other smoked meat. Still a nice beer, but a little disappointing.

Medium to full bodied with a bitter aftertaste and mild carbonation. This beer does not have as much of the smoky, or bacon flavor as I had hoped, which is disappointing. I am still glad I had a chance to try this.

A: A motor oil pour produces a monstrous 3 finger+ cinnamon colored head that was incredibly well lasting. The head was a marshmellow structure, all the while leaving a thick shellacking, coating the glass with &gt;90% efficiency as it slowly receded.

S: Morning after burnt wood and ambers deliver a rich smoky appeal with a strong sense of strength. Burnt bacon and minerality also chime in. Not since Aecht Schlenkerla have I experienced such a deep, burnt smoky appeal.

T: Thick oatbase is very evident, creamy highlighted by liquid smoke and burnt wood. Dark chocolate, burnt bacon and a deep earthy roasted coffee bitterness moves in along with some dark fruit. Hard to imagine doing it much better. Nice campfire minerality and creamy dark roasted coffee base laces the tongue upon the swallow and decides to linger abit.

M: Thick and creamy mouthful, dark and rich and roasty on the tongue with nil carbonation.

D: Very good drinkability, consumed at 50-55F. Alcohol at 7.5% is hardly a factor, you'll be to mesmerized by the huge smoky roasted nature and smooth consumption. Silky smooth on the down.

Too smokey! First sip hits you wth that over smoked, burnt maltiness. The aftertaste is worse than the mouth feel, ill leAve this short bc i couldnt stand this one, im usually a huge mikkeller fan, but i was dissapointed with this brew. Overall... Not so good.

T/M-Oats, bitter, earthy hops, roasted malts, a touch of sharp acidity on the back end. Not as smoky as something like Schlenkerla, but pretty solid.

D-One bottle is enough to get the idea.

Beer Geek Bacon from Mikkeller ApS
Beer rating: 87 out of 100 with 603 ratings