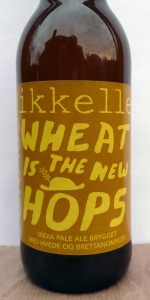 Notes: India pale ale brewed with wheat and fermented with brettanomyces.
View: Beers
Reviews: 114 | Ratings: 461 | Log in to view all ratings and sort
Reviews by Hopyard57:

Very hazy light gold with small white chunks, good sized head and good lacing. Smells tangy with citrus, brett funk, and a little cardboard. Taste follows suit, juicier than I expected with mangoes and grapefruit, a little sweet at first, but dries out, a pleasant black pepper, and nicely pithy. Feels on the thinner side with a little sizzle, which makes it very drinkable. Overall, this is definitely up my alley. Inspired by the likes of Orval and XX Bitter, but riding more of the modern hop wave and downplaying the yeast a bit, perhaps. I'll grab this one whenever I find it.

Update: Two out of the four cans were good, like described above. The other two were bad-homebrewy messes of yeast, autolysis, and wet cardboard. The inconsistency within the 4--pack is strange, but if I see more of it I'll still take the chance on it because of how much I liked the two that were in good shape.

T - Taste is similar, with hefty brett funk and tropical flavors, some stone and tropical fruit malt sweetness, and a mildly sour and bitter finish.

D - Pretty enjoyable stuff that delivers exactly what it promises. Easy to drink and great for a hot summer day. Surprisingly affordable for a Mikkeller offering. I'd drink this one again if it was on-tap somewhere.

Pours a nice light gold with a one-finger head into my glass. Very light. Looks crisp.

Holy Wheat, Batman! And it's complimented by a mix of pungent, fruity brett and hops.

Ditto on the flavor. The Brett and the hops mix well, creating a salty pretzel facade (think the saltiness of a pretzel...the dough that created that pretzel). The hops drown out the Brett more than I'd like.

Lingering "saltiness" from the hops and brett mixing. Lest I forget about the wheat, it is barely here. More of an enhancer at this point.

Excellent collaboration between Mikkeller and Grassroots. Might I add that wheat IPAs/white IPAs seem to be the "style du jour". Better to have the pros do it and do it well!

The Tide And Its Takers
Anchorage Brewing Company