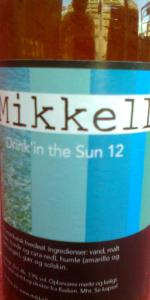 A refreshingly light beer. Yellow, citrusy, with a small foam head. Something great for summertime and a BBQ. Wish they'd bring this one back.

Holds up surprisingly well for being this old. The taste and smell are exceptionally strong and make me wonder what this would have been like had it been more fresh.

A: Stunning for a 1.9% ale. Cloudy, darker than expected (medium copper), massive uneven head that reduced nicely but never quite disappeared (love it). Despite the glassware I'd say that I'm impressed by the lacing as well.

T: Assertive, unbelievably hoppy given the ABV. It's definitely showing it's age, I'd imagine that the citrus component was much more dominant when this bad boy was fresh. But really, bottom line, this drinks like real beer at under 2%. In an of itself this beer is an achievement.

M: Love it. Great carb & enough malt to give it some weight on the palate.

O: I had lowered expectations going in, but this beer has really delivered (at least within context). If you can get your hands on one at a reasonable price - I'd say get after it - it's worth trying once for sure. To wit, if there's to be a 2015 release, I'm all over it.

way past its prime, as you would reasonably expect any beer under 2% abv to be after a couple of years. I liked the smell okay though, loaded with fresh orange peel and high acid orange juice. the look is a little gross, dull yellow color and really thick for how low alcohol it is, but it contributes a fairly frothy mouthfeel that I think would have been nice had the flavors of the hops and wheat malt no faded so much. I think the world needs more beer like this, flavorful craft selections with negligible alcohol content, its perfect for summer boating and hiking, and I would love to see this fresh in 30 pack cans. it just isn't one to hold on to and like the jester king collaboration, it just didn't stand the test of time. I hope they make this again and I can find it fresh though, the potential for a real nice refresher is definitely there.

I appreciated the amount of hops put into this beer. It was very bitter, although it did have an IPA aroma. Also, it was very light, definitively a day beer or session beer, but, 1.90 ABV? Really, this is for those who are on a diet, or those kicking the habit. Nice placebo effect though.

Good beer to try, very interesting, but hardly enjoyable. Ferments in bottle, but hardly any.

Pour is orange with light haze and a ridiculous white head, giant and chunky, thought it might be infected at first. Scent reveals light floral and grassy hops, lots of pale malt. Smells like a very old/tame IPA, but not bad considering the ABV.

Well it's a low alcohol beer, and it tastes like one. A decent scent for the style but the rest is probably what you'd expect - quite bland. I do give Mikkeller props for just putting out beers like this though.

Poured from a 12 oz bottle into a standard pint.

T: Very light on the wheat, construction paper, with a lemon infusion. But not really sweet.

M: Light, shallow, crisp with a steely finish... like chewing on a copper pot. Harsh.

D: The harsh bitterness in the finish, will put the kabosh on a quick finish.

Atmosphere is really strong. Huge head, fair lacing. Nose is wheaty, with plenty of lemon citrus, and some Italian spice. Light, thin, and shallow wheat and paper with a harsh citrus infusion. Overall, this is an average quaff.

A: Pours a hazy golden yellow with 2+ fingers of head that retains for a good while. Eventually settles down to a thin cap that leaves some very nice lacing

S: Big notes of fruity esters from the yeast along with a good amount of sweetness and lightly citrus hop character

T: Quite a lot of flavors going on here. Get some fruity esters and a light yeasty spiciness followed by the lightly citrusy hops. A light bitterness is present throughout

O: Wow. Who would have guessed that this kind of brew (the sub-2% alcohol kind) could have this much flavor packed into it. Nicely aromatic and flavorful. So much so that it has more than some 6%'ers that I've had in the past. A little stiff on the price at $5 for an 11.2 oz. bottle, but definitely worth it to try once and see quite a successful experiment work out as well as this one. Gotta give some props to Mikkeller on this one

From notes. Pours a hazy orange with a big foamy white head. Tons of lacing. There are clumps of bubbles sticking all over the glass. It really doesn't smell like much. I was expecting the aroma to be the standout strength of the beer and wouldn't be surprised if it was with a pint poured from a fresh keg. However, from this bottle that has traveled unknown miles, I'm just getting a light citric hoppy flavor. It's nice and a big step up from any other beer that I've had in this style or under 3% abv, much less 2%. The taste is a very refreshing, mildly tart hoppiness on top of pale fresh barley. It sort of tastes like lemon skins mixed into sparkling water. The malt mostly provides body. It's a rather dry beer. Mouthfeel is creamy and full. This is not an easy beer to rate, and it certainly benefits from style comparison. However, that doesn't mean that I don't like the beer. It's quite good, really.

11.2 fl oz brown glass bottle with standard pressure cap served into a Uinta pilsner glass in me gaff in low altitude Los Feliz, California. Acquired at a nearby beer store for an appalling $5.99. Since Mikkeller is my all-time favourite brewery and I'm on a mission to review every beer Mikkel puts out, I broke down and bought it - even though I hated last year's release. Hopefully this one is better. Reviewed live. 1.9% ABV confirmed. Note that the label reads "Drink'in the Sun 12"; this is definitely a distinct beer from other similarly titled listings on the site. We're not just noting that this is the 2012 release of "drink'in the Sun"; that beer is 2.4% ABV by all accounts.

Imported by the Shelton Bastards. No wonder it's so pricey.

Served straight from the refrigerator. Side-poured with standard vigor as no carbonation issues are anticipated.

The goal of this beer seems pretty clear by the title: this is meant to be a refreshing "American Style Wheat Ale" you could drink on a lazy summer day. I'll factor this in to my review.

Yields a satisfying "ksh" upon opening. No problems with liquid surging out or anything of that nature.

A: Pours entirely head. I'm talking the entire glass. Khaki colour, beautiful thick rolling cream, excellent thickness, and certainly no problem with retention; it'll probably hold for about six minutes. As the head slowly recedes (from the bottom, I mean...), I glimpse the body: it's pale yellow in colour, surprisingly vibrant, and transparent. Translucent as well. No yeast particles are visible. No bubble show. Looks pretty good. It's somewhat unique, in any case.

T: Very full bodied wheat build, but it runs a bit thin in the third act and on the finish. Overly hopped; too much floral character is out of balance with the very limited malt bill. I get a bit of lemon zing on the climax, a nice touch. It's surprisingly subtle for the style (if we're calling it a "low alcohol beer", which seems more an arbitrary characteristic than a style per se) and I wouldn't call it unrefreshing. Certainly no alcohol comes through. And no yeast either. I will say that it's bland and imbalanced.

Mf: Off. Wet throughout, but with alternatingly smoothness and coarseness that lacks motivation. It's also a bit unnatural in its slick quality. I don't care for the mouthfeel at all.

Dr: It's just so pedestrian. If it wasn't so low alcohol, I wouldn't be impressed with its flavour. But even as a surprisingly flavourful low alcohol beer, it isn't an ultimate success: I wouldn't want to drink lots of this for the taste. In that respect, it falls short of its goal. In any case, it's much better than I remember last year's release being. Still, it's quite overpriced. I wouldn't get this again, but if Mikkel brews a 13 next year, I'll be the sucker who buys it. A noble attempt from Mikkeller, and an interesting experiment, but ultimately a failure

Pours a cloudy amber-gold with a decent head into my glass. For something that's low in alcohol, you wouldn't know it.

Hops and buttery (?) wheat notes greet the nose. Again, unless you've had a lot of NA beers, you would not be able to tell.

Crisp, refreshing and surprisingly full of flavor. The bread hits you hard, which is probably the only "negative" (because really, there aren't many) about this beer.

Lingering butteriness is a bit of a buzzkill. Otherwise, not bad at all.

For a low alcohol beer, I gotta rate this well because if you've had the style, it's mostly sweet, carbonated grain-water and this makes an attempt to rise above.