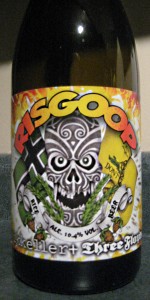 A 750ml bottle with a best before date of 1st April 2020 (drank before that date, I’m just behind in my reviews). Poured into a snifter glass.

Appearance: A hazy amber orange colour with a one finger beige head that had decent retention while leaving only sparse mini spotty lacing.

Overall: Not what I expected as it was more bitter that I expected. That’s not to say that it doesn’t work or anything, as despite the bitter and sweetness, it was still an enjoyable sipper.

Served in a snifter glass from the bottle (picked this gem while I was in Iceland).

Appearance: Cloudy cooper colored brew with medium to heavy bubbles on the body. Head I illy is an off-white color rising to about one finger's length. Drops with zero lacing after two or three sips.

Taste: Like the smell but extremely amplified, bitter and floral with a liquor feel to the brew. Has a sour feel which makes you think of citrus (tangy grapefruit).

Mouth: Very sticky brew makes you think of rye bread because of its light sourness. You reminisce lemon plus skin at the end.

Overall: Very good brew, only problem it had is that it is closer to an imperial stout than any Barleywine I have ever tasted. Think of it as a hybrid brew the Barleywine DIPA lovechild. Drink with love...Salud!

A: Orange brown and moderately cloudy with no carbonation and not a full finger of yellowish head. Random lacing almost like Thai writing, or Hebrew.

T: Buttery, crème brulee, toffee, light sweetness, little alcohol, a burnt bitter quality on the finish which may be the hops and toasted malts, or both. The brie rind like taste comes through as well.

O: Got this on Wishbeer in Bangkok, drank in Kunming March 29th, 2015. Great feel to it for a barley wine, and the flavours meld together very well. Hugely expensive, but really hard to find anything by 3 Floyds outside of the Chicago area, let alone in ASIA, which was a huge blessing.

A slightly hazy amber liquid, a few pieces of sediment and some slow bubbles feeding a solid three fingers of tan foam that has slowly falls to a thin film leaving partial rings deep down the glass

S candied pineapple, grapefruit, pine, and a heavy amount of caramel, so earthy notes I can't quite place and a hint of booze, has some orange marmalade as it warms

T more pine and a little rind, shes a bit of a palate wrecker with loads of hops, shes a little sweet, not sure what the rice malts doing as I don't really taste it, a little Flintstones vitamins

M I want to say its thick but it fluffs up and feels creamy, perhaps this fluffed up feel is the rice? quite sticky on the lips with pine and rind lingering, not sure where the booze is hiding

O not lacking anywhere and if you like hops odds are good you'll like this, I'd like to taste it down the track but I don't mind the hop bomb it is today

rice didn't really play a big part for me anyways, drinking like a DIPA today and I enjoyed it even though it wasn't exactly what I was expecting

750ml bottle. Not the one brewed in suburban Chi-town, but rather the Mikkeller-side one made outside of Gent, Belgium at De Proef. A ricewine, technically, from the sounds of it. Does 'goop' mean the same thing colloquially in Danish as it does in English?

It smells quite prominently of a bitter grapefruit rind and orange peel fruitiness, pine resin, a soft earthy funkiness, hints of rice pudding, but mostly still a solid caramelized barley malt, and an herbal, sort of floral booziness. The taste is more bitter citrus and pine hops, keeping this steadily in American 'barley' wine territory, with a gritty otherly graininess, the rice showing what it can do when rendered in a perceptible dose, but as a guest - the caramel, somewhat toffee-like malt still large and in charge. A persistent, pithy funk hangs about, along with further herbal, almost weedy hops. You can't so much taste the booze, as feel it closing in from all sides.

The carbonation is generally rather soft and innocuous, but not below performing its basic duties, the body a decent medium-heavy weight, but with a strange airiness that I find hard to reconcile, yet which doesn't really interfere with the workaday smoothness. It finishes on the sweet side, the rice pudding and caramel malt kind of nudging each other, while the hops mostly switch over to the fruity, instead of bitter, side of their duality.

An interesting experiment - take rice, that maybe unfairly reviled beer ingredient in craft brewing circles, and make a Yankee-style barleywine with it. Call it something cartoonish, add a corresponding label to a larger-format bottle, and let 'er loose. Yup, it's Mikkeller, all right, and this mostly succeeds, with hops, grain, and booze aplenty. Plenty enough that I can't stress sharing this offering any more.

Risgoop from Mikkeller ApS
Beer rating: 90 out of 100 with 52 ratings