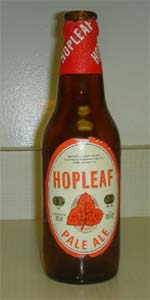 Notes: Hopleaf Pale Ale has remained true to its recipe since 1928 replacing its equivalent Farsons Pale Ale over time. Being the first beer brewed at the Farsons brewery in Hamrun, this Pale Ale was instrumental in opening a new chapter in the history of the Maltese brewing industry, being the first locally brewed Ale.

Hopleaf Pale Ale is Malta’s bitter ale brewed with high quality malt and traditional English hops. It has a strong, fresh character with a pleasant hoppy bitterness balanced out by malty sweetness. Today this pale ale is enjoyed by mature beer drinkers and ale lovers alike.

33cl can, , poured into a Home Ales country mans Half Pint tankard.

Just like the bottled version I reviewed some years ago it was light amber. The white head left some lacing, but faded away.

Hops in the nose: hence the name.

Full, goldenn yellow, with one finger of white foam, creamy, english. Good amount of carbonation.
Quite malty, with some english hop, not too fresh.
Better taste, where the hop is more present, and more amalgamated with the malt.
A bit too carbonated for an english ale.
Same notes in the aftertaste.

This is commonly referred to as the Red.
On tap poured into a branded imperial pint (one that I would have like to snagged, btw), the beer is a light copper with a fluffy white head. In fact all of the beers from this brewery have better than expected heads and lacing. Not sure if they are using a chemical foaming agent or just good production values, but the beer is a looker.

The nose is grainy with a bit of herbal hops.

The taste tracks the smell. It is slightly sweet with a wee bit of hoping. No off or odd tastes, and it is easy to pair with food. I would like to see the hops pushed a bit more to the forefront.

Hand-delivered from Malta to Moscow (thanks, Dr. Mark!), the can in metallic red with a black and white label featuring a hop leaf in the middle. Ingredient information is very limited ("best English hops and malt"). Best before 12/05, I opened it on 9/4/05.

Pours a slightly dark clear gold under a one finger white head with a bit of contours and decent staying power. Nice strands of lace cling to the glass. Lovely apricot hop nose, both sweet and tangy. The mouth is well-carbonated and slightly on the heavy side. The taste is very nice, with plum and apricot mixing with a crisp hoppy spice that is dry but not very bitter. There's a definite herbal quality here, not grassy but still very faunal (if that's a word). The aftertaste is mild, with a touch of bitter and a lingering plum impression. Uncomplicated, yet enticing. A very, very nice brew.

The colour is gold (10 EBC), the liquid is clear. The head is pale beige and airy. It sinks slowly leaving lots of fine lacing.

The smell is frowsy with lots of bread and fermenting dough. Some metallic bitterness, some nuts and a hint of cheap toffee.

The taste is semi-sweet with some bitter-sour notes of lemon juice. Quite a lot of butter. Light chemical bitter flavours. Light body. The aftertaste got a sticky sweetness, some apricots and carambole fruits. Hints of alcohol and solvents in the finish.

The carbonation is light, the many bubbles very small. The Liquid is light.

Had this while in Malta. It poured with a minimal head and had a soft light copper color in the glass that was pleasing to look at. The nose had a very faint smell of hops, slightly citrusy. The taste was mediocre with not a lot going on- some slight hop flavors and not as much bitterness as you would want. The hop flavors fade quickly too. The mouthfeel likewise was lacking, a tad too light for what I would want in this style.

A pretty fair example of a sessionable English Pale Ale, and of the 3 main Farson's beers I've had on Malta, thifs is by far the best and the one I have gone to consistently while I've been here. That is, it was the best, until today I discovered its bigger brother -- Hopleaf Extra -- which I did not know existed, but will be adding after this review.

As for the regular Hopleaf, it pours a pale copper with a nice sticky white head that laces well. Mild sweet malt aroma. With some samples, I have gotten a whiff of a metallic aroma, which would be typical of the style, but unusual as I expect this is brewed with Maltese water and not English. Also get a bit of juicy, fruity esters and some mild hops.

Medium-light body, some good chewy malt sweetness upfront with a nice herbal hop finish. Subtle, but pretty well made, and very sessionable at only 3.8%abv.

A pleasant surprise to find a good drinking ale like this on a rock in the middle of the Mediteranean. The British seem to have left a beer legacy on this Island's turbulant history. Unfortunately, the legacy of their cuisine survives a little too well to boot.

Oh, and this paired very well with the spicy, rich Indian lamb dish that I had lastnight.

Note: I've also heard this brew is available "Smooth & Creamy", (ie on nitro-tap). I did have one bad experience with Hopleaf while in Malta, and having found out about this nitro version, I believe this might have been the culprit, though it was such a poor showing I can't be sure.

Brought this bottle back from a recent trip to Malta. Poured a very light straw color with a fluffy white head. Left lacing all over the glass.

Judging by some of the other reviews, it seems my bottle was lighter in color, as it was very a very pale yellow, could be a result of the traveling or the fact that the last review was a year ago and the beer may have changed. Definetly worth a try and great on a hot day.

A: A great golden orange colour. Minimal head with traces of white bubbles.

T: Only slightly metallic. Mostly dry, especially on the aftertaste. Some pale malt or lagerish sweetness just at the start before dry carbonation kicks in. Hops are very mild (the name is misleading). Not great, but not unpleasant either.

M: It depends on how you feel about dry beer. If you like, you'll probably love this. Heavy carbonation, but I can't get past the penny bitterness.

D: Not particularly drinkable or tasty. I can't recommend it. Still, not an entirely unsuccessful pale ale. It improves as I drink it, bumping up my final assessment just a notch.