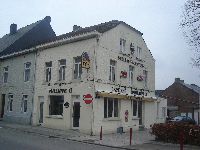 After a full lunchtime at Brasserie Mortals and a quick 2-beer stop at the large Super Des Fagnes Brewpub, we eventually found ourselves in Philippeville with a 90 minute break for the Coach Driver. Our Coach had actually parked on Rue du Moulin close by to the Philippe II. So we headed out to the Main Square and the further away Les Armes (which is listed as a Try Also in Tim Webbs ever trusty Good Beer Guide to Belgium) for our first brews. Then we took the 5 minute walk back here to finish closer to the Coach and sink a few in the Philippe II, which has a full entry in Tim Webbs Guide.

The pub is named after the son of Charles Quint (of beer fame), Philippe II (of Spain) who picked up the non-Austrian lands after his fathers abdication in 1555, Philippeville also bears his name. Situated at the end of a row of buildings, Taverne Philippe II has a corner bar appearance. A two storey building which has a third attic floor in the end of the hip and gable roof. The beige painted exterior is rather plain, but it is further decorated with Stella Artois, Ciney, Kwak and Leffe beer signs, as well as a No Entry sign on the side that faces Rue De France, which is a one way street.

The interior is very light and airy, with its clever use of low voltage roof mounted track lights, wall mounted up-lighting which reflects off of the white painted roof and pastel peach painted walls, it all adds to the open modern ambience. The high set bar is also quite modern looking and situated against the left hand side wall as you entre from the door on Rue De France. Basically the Philippe II is just one large rectangular room, which is split in two lengthwise with a dividing wall and archway. The bar serves both rooms, with the back room serving as an overspill area and providing access to the very clean restrooms, there is also another entrance on the side of the pub that opens into this back room. The whole place is extremely clean, very tidy, unfettered by useless bric-a-brac and well presented; everything is in its place; so much so that it almost feels minimalist in its décor at times. There are however lots of potted plants to break up the simple feel and add to the comfortable surroundings.

The beer list numbered around 50 which included many regulars in and amongst a few well established brands, but it also had some interesting and unusual beers to keep the beer geeks in our party happy as well. I sneaked in two brews here before we had to leave; the first was one that I had never seen or heard of before; La Houlette, a 6.0% brew from the prolific Du Bocq. The second was a new release from Du Bocq called La Framboizette, a 5.6% fruity Raspberry brew that wasnt all that bad and far better than expected.

Not sure if they do food here, it looked to be just snacks, but we were not looking to eat here anyway. Service was attentive and the presentation of the beers once ordered was excellent, asking if we wanted our beers poured, or if we wished to do it ourselves, I have to confess to asking for the latter, but it was very nice to be asked and given the option, I can't recall the last time that happened.

A quality old bar with a modern day make-over which impressed. A solid beer range including a few unusual local brews. If you get to Philippeville, I would recommend heading to Les Armes (see BeerFly) first, and eating there if you want food, then heading back down to the Philippe II to finish off with a few more beers, especially if you come by train as the Philippe II is closer to the Station which is a little out of town.

Philippe II in Philippeville, Belgium
Place rating: 3.8 out of 5 with 1 ratings