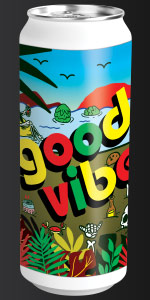 Notes: good vibes is the totally righteous IPA Curt has been dreaming of making for years. Hopped five times in the kettle & double dry hopped to produce bodacious dank fruit notes, we use gnarly amounts of Galaxy, Amarillo, Mosaic & Apollo in this West Coast-Style IPA. I made this beer on my time, you can drink it on your time, but really, shouldn't it be our time?
View: More Beers | Place Reviews
Recent ratings and reviews. | Log in to view more ratings + sorting options.
4 by bacher468 from Pennsylvania on Jun 11, 2022
3.75 by KT3418 from Colorado on May 28, 2022

Good Vibes from Voodoo Brewing. 16 oz can purchased from Franklin Beer, Franklin, PA (07/10/2021). $ 3.00 (including tax)/can ($0.335/oz). Stored at reefer in store and at 40 degrees after purchase. Reviewed 29/04/22. Note that I use DD/MM/YY protocol.
Stamped on bottom of can “CANNED ON 08/13/21”. Served at 45.3 degrees in a hand washed and dried Jester King snifter. Final temperature 51.9 degrees.
Appearance – 3.5
First pour – Pale Straw (SRM 2), slight haze.
Body – Straw (SRM 3), hazy. When rear-lite, same with marked effervescence.
Head – Large (Maximum 5.3 cm, aggressive center pour), white, low density, average retention, diminishing to an undulating 0.6 to 2.3 cm jagged crown fed by moderate carbonation and a rocky partial cap.
Lacing – Poor. Tiny irregular pieces of drying foam are scattered about the inside of the glass.
Aroma – 3.5 – Mild aroma, some spiciness, and some resin. No malt, no yeast.
Flavor – 3.5 – Starts lightly bitter and spicy with some malt. No yeast. No ethanol (7.3 % ABV as marked on label) taste or aroma. Weak gastric warming occurs. No dimethylsulfide or diacetyl. Ends on the dry side.
Palate – 3.5 – Medium, watery, lively carbonation.
Final impression and summation: 3.5 WCIPA all the way. Somewhat bitter and resiny and the flavors have weakened with time, but still a decent IPA.

This is a true west coast style IPA. Piney bitterness throughout the entire palate. Nose is juicy, taste is juicy and follow through are all juicy. Superb IPA!

This is the last Voodoo brew I'd initially not been too impressed by years ago, which I've reevaluated enough to need to delete and replace my original review entirely.

Surprisingly clear compared to my past experience, this shimmering amber beer has a dense and persistently level thick white head of moderate height slowly settling to a ring that leaves all kinds of spongy lacing.

Way more assertive and bitter than I remembered, it's a total WCIPA, even moreso than Hoodoo. Bitter, piney and resinous with light hints of triple sec heat and flame licked citruses, it can really shock the senses next to a Hazy Vibes.

The slick medium-light body has a fine froth and finishes semi-dry, warming on the way down.

This one's a conundrum. While better than I remembered, it's not that great either. I don't know why it's such a flagship brew, or why it's so popular, if it even is anymore, because they do a lot of other far more fantastic IPAs at this point.

This beautiful beer pours a golden color with that nice subtle touch of “suspended animation” haze I associate with the best WCIPA’s and sports a dense white head that provides ample lacing. Dank citrus notes including grapefruit and lemon at forward on the nose, and there’s also some resiny pine, melon, and berry aromas. Nice!

The grapefruit, berry, and melon flavors are most prominent at first on the taste, but what makes this beer for me is the combo pack of lemon and nicely bitter pine flavors on the finish. A magnificent interpretation of the WCIPA flavor profile.

The mouthfeel is dry and fairly crisp, fitting the style very well. I’m a WCIPA fanboy, and this is a fantastic example of the style, IMHO. Truly a pleasure to drink.

My bestie and I got a 4pck of this beer from the Erie, PA location. It poured a clear golden with thin white head that is not leaving much lace. The scent had pine resin notes. The taste was nicely balanced and easy to drink with pine base and subtle bitter hop presence. The mouthfeel was medium in body and had good carbonation. Overall it is a solid beer.

Look: Pours an effervescent deep golden yellow color with a rocky, large-bubbled head. The head is receding, leaving behind some interesting lacing patterns. Totally clear except for just a bit of haziness that comes out after swirling the bottom of the can.

Smell: Smells like a west coast style IPA with some nice hop aromas. Getting melon and pine up front, with some dankness on the back end. Honeydew melon - even the musty aroma of the outside of the honeydew melon - are apparent here. Secondary aroma of papaya. Aroma is a bit simple and straightforward, albeit good.

Taste: Woah, so much of that melon comes through initially which is really cool. Big honeydew component up front and lingering on the finish. After the first sip, it comes across even more apparently on the nose. This beer is really interesting and tasty. It's very refreshing, crisp, and clean. The finish is moderately bitter, with piney resin lingering long on the palate. But it tastes very well-balanced. Really enjoyable. 7.3% ABV is well-hidden.

Overall: A very nice west coast style IPA. This is my first Voodoo Brewing Company review. I've had KillaPilz but did not review it (didn't care for it much but I may revisit it and review it at some point). It's nice to see modern applications of west coast IPAs like this one that use different hop varieties. Sure, you can create a west-coast IPA with cascade and other C-hops, but there are a lot of other interesting flavor profiles that come through when brewerers experiement with other hop varieties.

Currently ranked #149 in the IPA - American style with an overall score of 92. #86 on the Top Pennsylvania Beers list.

Served cold into a dimpled mug.

APPEARANCE: Clear orange-copper body - looks filtered judging by its clarity and absence of any visible yeast/lees.

White head. Appears soft and inviting, but it could be thicker, creamier, frothier, and more robust. Starts at about ~5cm of height and takes a good 10 minutes to recede...this boasts superb head retention.

Appears well carbonated. Yeah, it's a good looking IPA free of any faults. A brighter more vibrant body and a frothier fuller head would take it up a notch, but it looks nice enough.

Malt bill is what one would expect...plenty of 2-row/pale malt but no noticeably oversweet caramalt or crystal malt.

Enticing and inviting, promising a drinkable IPA with a nice hop profile and plenty of flavour. Aromatic intensity is moderate.

TASTE: Tropical fruit creamsicle, mango, pineapple (I do usually hate pineapple flavour in an IPA, but it works well in this one for some reason), passionfruit citrus, resinous hops, a bit of oily hop flavour, hints of a "dank" (as the kids like to say) cannabis-like resin/herb sort of flavour, and clean floral hop flavour.

I can't say Mosaic is well showcased here - its signature subtle blueberry flavour is absent - but the Galaxy and Amarillo play surprisingly well together in a hop harmony I wouldn't have predicted would work as well as it does.

Well balanced with a straightforward likable hop profile and a no-nonsense pale malt backbone. Targets a classic IPA build and it's right on the money. Sure, I've had more complex IPAs with even better balance - and it's a bit lacking in terms of depth of hop flavour - but this is so damn likable and drinkable it's tough to pick nits.

TEXTURE: Oily, coating, smooth, wet, refreshing, medium-bodied. Pretty much your classic IPA mouthfeel with close to perfect carbonation. Lets the hops shine without detracting from them, and the oiliness of the mouthfeel helps accentuate the resins of the Amarillo hops.

OVERALL: I think the kids call beers like this "crushable." The kind of brew I'd happily buy a sixer of were it well priced, but as nice as this is its price is a bit high for its quality and I'd sooner have a sixer of Sierra Nevada's Celebration, one of Troeg's better IPAs, Bear Republic's Racer 5, et al. This is definitely worth trying, but as oversaturated as the IPA category has gotten over the years, this just plain gets outclassed by its competition in my book so I don't see myself buying it again knowingly, tasty though it may be for what it is.

12oz can. Canning date is stamped '9/16/20', best by '12/15/20'.
Slightly cloudy, pale gold colored body. One finger of white, dense head. Leaves behind some random design patterns of lacing.
Aroma is citrus and tropical fruits, with an accompanying pine dankness.
Taste is tight with the pine sap, which is followed by sweeter citrus and tropical fruit flavors. Dank hops in the aftertaste.
Medium mouth feel, with a very dry finish. Very good carbonation.
No component here is too much, and all work together for a balanced and bittered/fruity IPA. Not at all cloying, and cleans up each sip very well.

12oz can, cheap from Top-Ten Liquors

Looks great, checks and ticks all the boxes. Smells okay, light hop armpit. A refreshing lighter IPA with tons and tons of hop flavor. A little alcohol spice meets with the modest malt backing, and it's all destroyed by the huge amounts of fruit juice style hopping

For the hopheads, this delivers. Drink cold, or else it goes soapy and off

Bottom of can is stamped with a best by date of 12/16/20, so I'm going to assume this was canned in mid-August, making it a hair under two months old. Anyway, this sports a big-ass fluffy white head that sticks around for a spell and starts to leave lacy rings as it recedes. Body is pale golden with just the softest of hazes. It's a reasonably pretty brew. Smells pretty nice as well; there's a hoppy bitterness up front that's quickly replaced with softer, sweeter notes of pineapple and mango. It's a remarkably nice balance. Taste follows, striking a balance between tropical fruit and bitter hops; neither overwhelms the other, though neither really packs a punch, either. That's OK, though; not every IPA needs to wallop you over the head no matter what the industry tries to dictate. Delicate, medium-bodied mouthfeel with spot-on carbonation. Damn, this is a good beer and one of the better IPAs I've had in awhile. A little subtlety goes a long way as it turns out. Good Vibes indeed.

Sweet citrus on the nose and palate. Faint pine on the finish. Nice balance with slight bitterness.

Mouthfeel is medium and soft. Carbonation is pleasant.

I like this one. It’s a nicely balanced, hoppy ale that drinks easy and is flavorful. Recommended.

T: Absolutely astounding. First of all, enjoy cold, it calms the flavor down. Very palatable. For ALL these hops, it's not bitter (85 IBU). It's floral and juicy. I take a swig, savor it for a moment, then it's a burst of flavor cascading down my palate. There are very few breweries willing to accomplish what is happening in this bottle.

F: Superb. It is doing exactly what it should do. Flawless.

O: This batch is months old and still fantastic. Long shelf life and great flavor, a wonderful addition to my inventory.

Tasted in a snifter from draft at Consume on May 28, 2019. Hopped five times in the kettle and double dry-hopped to produce bodacious dank fruit notes. Brewed with Galaxy, Amarillo, Mosaic and Apollo hops.