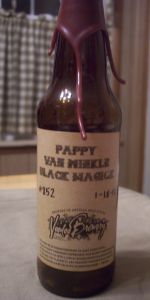 Reviewed by Fux from France

4.81/5  rDev +1.5%
look: 4.75 | smell: 5 | taste: 4.75 | feel: 4.75 | overall: 4.75
Side by side with Buffalo Trace batch 1 and Apple Brandy.
My favorite variant of the set. Elegant bourbon flavors dominate, wood, vanilla, cocoa. Very complex with the pappy barrel shining.
Full bodied, smooth, not overwhelmingly sticky.
Alcohol is more present than in the BT variant but on a reasonable level.
Awesome beer.
Thanks to Anton and Michaelis for sharing.

Reviewed by Brian29 from Ohio

There is no gimmick with this beer, no trendy flavors. Its a barrel aged stout to perfection. Smooth, creamy, sticky, boozy nearly 4 years later but rounded and soft. The beer bursts with flavor, fudge is the most predominant. A beautiful beer.

Reviewed by KevBot89 from Pennsylvania

Reviewed by lamb0176 from Pennsylvania

Reviewed by mojiboo02 from Illinois

4.99/5  rDev +5.3%
look: 4.75 | smell: 5 | taste: 5 | feel: 5 | overall: 5
I have drank three different bottles over the years and all have been fantastic. Probably my favorite BA Beer out there. The pappy barrel comes through with fantastic taste and the beer is up there with Pappy Sexual Chocolate.
Jan 31, 2016
Rated: 5 by troybeeramalau from Pennsylvania

Reviewed by ArkyVaughan from New Jersey

Rated by Chibeerguy1 from Illinois

Rated by Kurmaraja from California

Reviewed by mrn1ceguy from Illinois

APPEARANCE: These all look the same basically. Thick black pour yields a 1+ finger, slightly looser, crackly, foamy dark tan head with decent retention. Inky black body with no real carbonation evident. Head crackles down to a decent foamy cap and then to a foamy ring only. Ring and a few wispy dots remain but no lacing down the sides. Black and nasty, but a decent-at-best head.

SMELL: This is basically the same as the Buffalo trace version. Big nose with plenty of bourbon, oak, vanilla, coconut, molasses, toffee and pure dark chocolate. Very aromatic and quite full of barrel aromas. Perhaps a touch of roasted grain in there, but the barrel, which is rather decadent in itself, plays the most important role here. Maybe a touch more oak than the BT version, but they’re basically identical.

TASTE: Again, virtually the same as the Buffalo Trace version, with just a few small differences. Oak and bourbon up front, with vanilla, coconut and some dark chocolate at the swallow. Flavorful finish, with plenty of toffee and coconut, vanilla sweetness, bourbon, some roasted grains and nice, pure, bitter dark chocolate as well. Aftertaste is sweet, malty, more toffee than the BT variant, with plenty of barrel and oak character and lingers nicely on the palate. A bit more boozy and just a touch more toffee and oak on the finish, but the differences are almost non-existent. Good stuff.

PALATE: Medium body and medium carbonation. A touch light perhaps and not quite as creamy as the BT variant. A bit prickly even. Goes down fine with no real bite, perhaps a light scratch at this point, and finishes sticky on the palate. Some decent heat lingers as well. Okay, but with all barrel aged beers, they often lack that heavyweight feel I so love in the style. A little more prickly than Buffalo Trace.

OVERALL: This is wonderful, wonderful stuff. Lots of great barrel flavors and a nice big stout underneath it all. This variant is perhaps not as decadent as the Buffalo Trace version for the simple fact that it is a little more alcoholic and the feel is not quite as smooth, but those are minor issues. I would say the Trace is the best of the three but this is a very close second. In the end, however, they’re all great and I enjoyed every drop of these. Thanks again for thinking of me claaark13. World class stuff.

Poured from the 12 ounce bottle that I bought on the first Barrel Room Collection release event on or about January 30th, 2013. WRITTEN with a Sharpie on the custom, numbered label is “1-18-13” so this is nearly two years old. It is bottle #230. I waited for hours in the cold for this beer and all of the others that made up the Barrel Room Collection box. That day I had one of the best beers of my life, a barrel aged BBVD (Big Black Voodoo Daddy) so, yes, I am psyched to try this one tonight.

A Maroon wax covers the capped bottle. I hate to even destroy it to get to the bottle cap but a guys got to do what a guys got to do. Finally worked my way carefully around and through the wax covering on the bottle and removed the tightly placed cap and there is a satisfying “pssst” as I open it. Pours an oil black with a dark brown but thin head on top into a clean, clear glass. Head dissipates into a thin single layer and then that even breaks up further so that there are islands of bubbles on top of the oil blackness. Could not improve the look. 5.0

S Dark Roast malt and Whiskey dominate. There is “heat” in the smell as well. This is going to be good. 4.5

T Wow, a lot going on here. The deep dark goodness of Black Magick with the Barrel Aged Whiskey notes. The taste lingers maybe as long as any beer I can remember with a nice velvety thickness remaining on my togue well after my most recent sip. The dark roast malt and whiskey certainly carry over from the smell right into the taste. The whiskey may be a bit strong but this is a sipper of a beer. Artisan beer from brewers of Artisan Styles. 4.5

M Thick, velvety feel as mentioned in “taste” section. Wow this beer has a HUGE mouthfeel! 4.5

D/O Drinkability is only fair since it is so expensive AND it really is a sipping beer. I could not imagine drinking two of these, let alone ANY OTHER beer tonight. It has center stage. It is the opening act and the main act. Overall, again this is an Artisan beer from brewers of Artisan beer styles. 4.5

Notes: This is the “first” of those Barrel Room Collection beers that I stood in line for and purchased from the brewery nearly 2 years ago that I have reviewed. I am certainly looking forward to tasting and reporting on the remaining ones right here on BA!

Rated by IPAchris from Pennsylvania

Reviewed by drmcleod10 from Missouri

S - Smell is chocolate, fudge, vanilla, huge notes of the fudge brownie smell and that classic pappy smell in beers

T - Taste follows the nose here with a solid pack of fudge and chocolate up front with the heat from the pappy coming through in the middle (all pappy barrel aged beers when done right have a unique taste to them and this one is no different) Finish is surprisingly sweet and bold with more notes of fudge chocolate tobacco. Really smooth for 13.5%

F - Feel is full bodied creamy thick not too much carb.

O - I enjoyed this slightly less than KBBS, but both reside in my top 3 as far as BA Stouts go