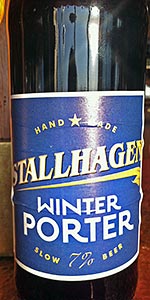 7.0% ABV. Served cold into a pilsner glass in Helsinki, Finland - where it was acquired at Alko Arkadia - and allowed to warm over the course of consumption.

HEAD: ~.5 inches wide. Dark khaki colour. Nice creaminess and froth. Thick enough. Not the expressive deep tan head you expect in the best of the best in the style, but it's generally appealing. Retention is merely average - ~2 minutes. Leaves no lacing as it recedes.

BODY: Opaque cola-esque brown-black. Looks a bit like a schwarzbier. Fizzy and obviously well-carbonated. No yeast can be seen within.

AROMA: Dark malts, mainly, with some schwarz malts and the faintest hint of smoke. I'm not finding much in terms of roasted barley (to its detriment and my disappointment). Muted molasses, a glimmer of dates, smokey pork.

TASTE: Dark & schwarz malts are at the core, supplemented nicely by faint smokiness with hints of meat. Still, the smoke isn't real expressive, and aside from muted reticent hints of molasses and vague dark fruit, there isn't really anything more to it than the malts. Some chocolate malt would be nice, or at least something more than just a simple basic malt backbone. Fairly inexpressive, with a shallowness uncharacteristic of the best baltic porters.

I'd like to see the addition of some roasted barley to the core, and this beer would be well served by playing up the smoke and committing to still more intricate flavours.

TEXTURE: Odd, in that it's simultaneously syrupy and yet too thin. Smooth and wet, with a medium body that never feels quite right...a good Baltic porter should be full-bodied and hefty on the palate. But this beer's almost bread-like filling feel is nice and complements the simplicity of the taste.

Not astringent, oily, gushed, hot, or boozy. But some drinkers might find it a bit weak.

OVERALL: Finnish consumers are better off sticking with Sinebrychoff's baltic porter, but this is one of Stallhagen's better offerings and will please fans of the style. Not an impressive or world-class brew by any stretch, but competent and worth trying if you chance across it. Its lowish ABV increases its drinkability, and I'll enjoy finishing the bottle - but it's largely unremarkable within its style. I'm always happy to see more Baltic porters on the market. Likable stuff.

In all a very nice potent Porter, good sipping qualities.

Taste: Surprisingly light when you first sip it. A fairly standard porter with an emphasis on roasted malt. Maltyness hints you in the aftertaste.

Overall: Porter is perhaps my favourite style of beer, and I’m always keen to try new ones. Having tried so many of them, my criteria is quite strict, so this could be rated higher, being a rather nice beer, but I know so many better ones! I feel like this one might be a bit too light if it weren’t for the reasonably high ABV — it supports the characteristics of the beer. The aroma is actually excellent, and I was expecting a very good beer from that. The taste does not disappoint, but it’s not as deep or developed as the aroma might suggest.

The colour is jet black; the large beige head is airy. Good head retention, some lacing.

The smell is light with clean hoppy-bitter notes. Some alcohol, smoked meat and air-dried ham. And lots of malt.

Some smoke in the balanced taste, lots of roasted sweet malty notes. Hints of pumpernickel bread. Smooth bitter notes with hints of oranges. Alcohol in the aftertaste as well as dark rye bread and a touch of solvents. Sponge cake dough in the finish.

The carbonation is medium strong, the small bubbles tickles the tongue. The liquid is a bit light.

A pleasant Baltic porter with a fine smoked note in the background.