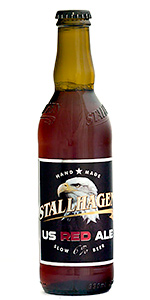 Brief impressions below from a 33cl brown glass bottle purchased in Helsinki and served cold into a pilsner glass:

6% ABV. Reviewed live as an American Red Ale per the label.

HEAD: ~1.5 inches wide. Off-white colour. Foamy and fairly frothy. Leaves no lacing as it recedes. Retention is above average - ~4 minutes.

Looks decent for a red ale; granted, it isn't red or amber...

AROMA: Clean barley, floral hops, pale malts. I find no amber malt, nor any of the notes mentioned on the label (i.e. dried strawberries, coffee, smokiness, and roast [sic] barley).

Suggests a shallow simple beer with a generic taste.

None of the notes promised on the label (as noted above) ever manifest in the taste.

Built nicely if you ignore the ostensible style. I quite like it, simple as it is. Depth of flavour is average - not shallow as feared.

TEXTURE: Smooth, wet, medium-bodied, overcarbonated, and adequately thick and hefty on the palate.

OVERALL: It's subpar for a red ale, but outside of style conventions, it's not bad. Stallhagen has better work, but this'll do if you're just after getting pissed. I wouldn't trifle with it again, but it's by no means a disappointment. Pretty average, and not a gestalt beer.

The colour is red (30 EBC), the liquid is clear. The two finger head is beige and compact. Very good retention and lots of thick lacing.

The smell is smooth and malty. It is a bit dry with hints of apricots, alcohol and biscuits.

The taste is bitter and malty. Strong sweet-bitter crisp notes of red berries, rye bread and dark bread. Full body. The aftertaste is roasted with flavours of red peppers, apricot jam, orange peel and rye bread. The long finish is smooth with some warming alcohol and red berries.

The carbonation is medium strong, the many small bubbles are short-lived. The liquid is semi-smooth.

A: Pour is clear copper with loads of red hues. The beige head is really tall and compact. Rather slow dissipation leaves rich lacings.

S: Rich malt, caramell and semi-sweet. A sour tone, as from cherries kernels. Floral as well as bitter hops. Nettles and citric notes. Some licorice in the back.

T: Like the nose but also with milk chocolate and a dry bitter sourness from those cherries. Bitter hops. Hazel nuts.

M: Long and lovely bitter aftertaste. Body is medium to full while carbonaton is mild.

Stallhagen US Red Ale from Stallhagens Bryggeri Ab
Beer rating: 3.39 out of 5 with 9 ratings