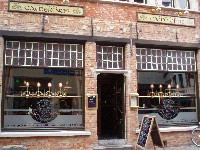 Reviewed by intransitive from Massachusetts

4.83/5  rDev +13.1%
vibe: 5 | quality: 5 | service: 4.5 | selection: 5 | food: 4.5
My wife and were recommended this place by the owners of the B & B we stayed in, and told that it was where locals go. When we arrived on a Friday evening in February, it was fairly quiet... families, some couples, a few guys at the bar. The atmosphere was very inviting; bright, full of beer signs, with loads and loads of bottles on display.

The menu was huge... 400 beers in bottles, and a small number of taps. Westvleteren 12, 8, and Blond were all offered for a mere 10 Euro. I started with an 8, served in the proper Westie glass. My wife had a Timmerman's, which was beautiful. The food was excellent, well-plated and attractive, portions that were the appropriate size. I had a creamy seafood casserole, my wife a beef stew, both were fantastic. We enjoyed our experienmce so much that we returned the next night, again to a sparse crowd of mixed ages, locals and tourists. I tried one of the beer cocktails (they offer around 10 of these) made with a honey strong ale, light rum and grenadine. My wife had another lambic, chosen more or less at random from the massive list.

A very comfortable bar, probably the best I've ever been to. If it was in my neighborhood, I'd leave my job and go there right now.

4.39/5  rDev +2.8%
vibe: 4 | quality: 4.75 | service: 3.75 | selection: 5 | food: 3.75
visited twice during our stay in Brugge - once for a round of pre-dinner beers, and then the next night for dinner and beers. The beer book of available bottles is almost overwhelming, but they do have in organized into categories so that helps. got to drink a bottle of Westy 12 in addition to other great beers. Service the first night at the bar was good, the bartender made suggestions and was quick with the pours. Service for dinner was a bit slow. When we made our reservation, they had us booked for 2 hours, and we had to rush our dessert to make the table available. Food was decent but not great.
Dec 13, 2018
Rated: 4.9 by montybugg from Kentucky

4.43/5  rDev +3.7%
vibe: 4.25 | quality: 4.5 | service: 4 | selection: 5 | food: 4
We visited at lunchtime. Wow, what an impressive beer menu (page after page in a three ring binder)! The vibe seemed more restaurant than bar when we were there and I found myself attracted to that aspect as if the beer was an afterthought shrug. It made me feel like a beer menu loaded with Westy, Cantillon, 3 Fontenein, etc is exactly what you should expect in every run of the mill Belgian brasserie.
Jun 05, 2018

Reviewed by The_Bujon from Ireland

4.56/5  rDev +6.8%
vibe: 4.25 | quality: 4.25 | service: 4.75 | selection: 5 | food: 4.25
A must go when in Bruges, located about 50 yards North of the main square. Selection on beers is pretty phenomenal given this is a serving establishment. You'll spend ages simply flicking through the beer menu, I always close my eyes, open it and point randomly, and hasn't let me down!
The atmosphere is brilliant especially in the winter months, something appealing about sat on a bar stool with your hands and beer on a brass top bar! Probably/possibly the best place in Bruges on balance.
Oct 04, 2017

Cambrinus is quite different for Belgium. First, it's pretty big, and second, the decor seems more British chain pub than Belgian beerplace. Not cozy in the same way as most other places in Bruges.

The beer selection is ridiculous with some 400 bottles on hand. Too bad that the staff didnt seem overly interested in guiding you through it. Service as a whole was a bit uninterested. A small thing like them not pouring the beer for you was a big difference, since it seemed like every other place did.

Overall, a good place, but the fact that we only had food and one beer speaks volumes.

3.54/5  rDev -17.1%
vibe: 3.5 | quality: 3.75 | service: 3.25 | selection: 3.5 | food: 3.75
Had to reserve a night in advance due to popularity although could have walked in for lunch any time. Decor is somewhat generic, service fair, nice enough but a little disinterested. Massive beer list but they were out of the first FIVE beers I selected and their suggested alternatives were not good. They could have sold me a lot more beer rather than leaving me with an empty glass for ten minutes at a time. Food was nice but rustic b-level comfort food, solid flavors but not at all outstanding. Prices fair but I come from NY. Many cool off the beaten path places in this touristy town, glad I tried one of the mainstays but likely wouldn't go back. Also hot as hell in there.
May 16, 2017
Rated: 3.75 by Ciocanelu from Romania

Rated by Lisa22 from Colorado

Reviewed by safphoto from Ohio

4.68/5  rDev +9.6%
vibe: 4.5 | quality: 4.5 | service: 4.5 | selection: 5 | food: 5
This was our favorite restaurant while visiting Brugge last April. We went there twice. We got lucky on our first time there. We were able to get seated as walk-ins. That's unusual as the place is almost always completely reserved. So, if you plan on trying it out, get a reservation first.

I was absolutely stunned when I saw the beer menu. Approximately 400 beers were listed. It was so hard to choose. I wound up falling in love with Straffe Hendrik and had it both times we ate there. The food was really good as well. I would recommend the Flemish Carbonade. It comes with Frites and warm chunky apple sauce. It was soooo good.

Reviewed by Darvin from Texas

4.65/5  rDev +8.9%
vibe: 4 | quality: 5 | service: 4 | selection: 5 | food: 5
We really enjoyed the experience. The atmosphere is excellent and the food among the best we tried while in Bruge. The beer list seemed too good to be true but they had everything we requested. Word to the wise, if your planning on having dinner be sure to make reservations. It was booked every night we were in Bruge.
Jun 27, 2015
Rated: 3.44 by Whatup14 from Canada (QC)

Reviewed by psuKinger from Pennsylvania

Cambrinus is a pretty popular place, and for good reason. It has a very large beer menu, and unlike a lot of the other cafes/beer bars we visited while in Belgium, this place offers a full kitchen/food menu. Prior to my visit, reviews had suggested that this was the closest-to-a-sure-thing bar in Brugge for finding available Westy's, and my personal experience also confirmed what others had said, as the Blonde, 8, and much-lauded 12 were all available. Additionally, De Bier Tempel (the bottle shop which is most likely to have Westy for those looking to take some back with them) is right next door, so these can be hit on the same swing-by for those in search of the "holy grail".

The atmosphere was not unpleasant, but had a bit of a vibe of "chain-y" and almost "english pub-y" in a way that most Belgian beer bars/cafes did not. It wasn't "bad", but it didn't feel like a *special Belgain experience" to me. The wait staff seemed knowledgable and were certainly courteous, but very busy and perhaps a bit short at times, with all the bustle.

The food was good, but very pricey.

Cambrinus is a must-visit if in search of Westy. If Westy isn't a priority for you, there's 4 other "beer destinations" in Brugge I'd rank above it, but if in town for a good 3-4 day visit, this is certainly worth a stop.

3.21/5  rDev -24.8%
vibe: 3.75 | quality: 3.75 | service: 2.25 | selection: 3 | food: 4
Decent place to grab a meal with your Belgian beer. Simple pubby atmosphere, medium sized bar and plenty of tables; seems like it could be a cluster during busy hours. Beer selection is kind of sketchy. I think their beer book contains every beer they've ever had there even once, considering 4 out of the 5 I tried getting were not available. Ok, maybe it was hoping too much to get a cheap FouFoune, so I moved on to 3F gueuze. No? Black Albert. No? House beer. No? So basically you're left with your standard Belgian staples, trappists, and so on. I got a Rochefort, which, though a good beer of course, I could get anywhere anytime. Even one of their house beers listed on tap wasn't available, so, kind of a fail there to have a non-updated tap list with only like 8 beers to list. So as far as beer selection goes, this place is genuinely lacking...it's one thing to post a large beer list, but it's another thing to actually HAVE the beers in stock.

We visited Cambrinus twice. The first time, service was on the weak side, and the second time it was atrocious. Five minutes for the waitress. Five for the baby chair. Five for the drink order. Five for the next drink order when what we ordered wasn't available. Etc., etc. Might seem like nitpicking, but all those "five minutes" start adding up, and it was about 45 minutes before we actually had everything in front of us, and the bar wasn't even that busy. Plus the waitress was stumbling around and cursing under her breath. I know they like Jerry Lewis over here, but jeez.

When all is said and done though, the food is pretty good. Good selection, even if all the dishes are pretty simple. The Italian-style fare was good. I was kind of craving something more in the "Belgian" style, but oh well. The menu is huge, but there is an English section in there somewhere.

Overall, not a bad place, just bad service, and a let-down of a beer list. Two times visiting was more than enough for me.

Rated by simoen from Belgium

Reviewed by BMMillsy from Florida

3.56/5  rDev -16.6%
Yea, solid selection. But no clue why this is rated so highly. Had Fou Fone and other Cantillon on the menu (only €11.75 for Fou) but only Kriek and Rose actually in stock. Westy Blond and 8 also on menu and out of stock. Poor service overall. Food was below Chili’s level. Very disappointed. While for an American, drinking 2 Cantillons and a Westy 12 with lunch is awesome, these are all over the local shop shelves and there were no other things nice about this place. Stop in I guess, but better places to eat with a fine beer selection everywhere. Seriously this place is a major tourist trap ambiance.
Sep 01, 2014
Rated: 4.75 by Highbury09 from North Carolina