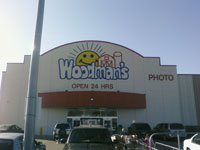 Reviewed by MilwaukeeCrusher from Wisconsin

3.45/5  rDev -6.8%
This is probably the best place for value in the whole city. Singles selection is limited, and staff generally doesn't know much about beer. Selection in general is very broad, and as far as quality they do get some of the higher end releases, but they don't last long. If you want to load up on a broad variation of Great Lakes brews and don't mind missing a few rare releases, then this is your place. For 90% of my beer purchases, this is my go to place. If you want rare or hard to find releases, you might want to go somewhere else.
Jan 13, 2011

3.15/5  rDev -14.9%
Stopped in here today. This one seemed somewhat different from the other two woodman's I've been to.

They had a few good northern MI/WI brews but not much in the way of rarities. All of the beer is stored in the cooler at this location. There are mostly 6packs.

The prices were on par with other woodman's; generally pretty cheap.

It seemed like this one had a good selection, but perhaps lackign compared to the average Woodman's.

The service here is nil, and the cash register person wasn't particularily exemplary.

Reviewed by minnunderground from Wisconsin

3.4/5  rDev -8.1%
Probably my favorite place to get beer in Appleton. Main downside is super hit or miss on the selection...If you see something that catches your eye...grab it you might not see it again...or it will be there for a long time...For ex...I passed up storm king stout one day and went a day later and never saw it again...same thing with SA noble pils but I luckily bought it the first time. The NG unplugged selection here is awful always only have one kind and its always like a year old one...don't know if they have rest in the back or what...Nobody around to ask anything...Um one time during the day super dead asked some guy if they had some certain stuff he didn't know jack. So the service is non-exisitant, self serve. On an up note I think has a fair price easily best price/section ratio in Appleton. I recommend.
Jan 31, 2010

Reviewed by BeerFMAndy from Wisconsin

3.85/5  rDev +4.1%
Another good Woodman's location with a decent selection. They had pretty good prices here too. Like every other Woodman's, the walls are covered with wood paneling and the layout is pretty much the same.

The singles selection was stronger than most other locations which was really nice. They covered the Euro stuff, lots of American craft, and Belgian beers.

The service was ok. As usual there was just someone at the casier counter but there was a beer guy stocking the shelves who helped out two people that I saw.

So far everything I got from this location has been good quality-wise too.
A good place to stop for beer in Appleton.

Reviewed by nflmvp from Wisconsin

3.05/5  rDev -17.6%
Probably the second best selection of craft beers in Appleton but rather a distant second.

That being said, you should be able to find something to your tastes. There's a nice variety of domestics, imports and even a handful of interesting craft beers including some DFH, Flying Dog, Allagash, Bell's, Tyrenena, Summit, Smutty Nose, New Holland and many others. Comparable to the Woodman's in Green Bay with only a slightly smaller selection.

Service is somewhat non-existent. I'm not sure whether or not this is to be expected in a liquor store that's attached to a grocery store but it would be nice to see some improvement here. Even when I can get them to take requests, I rarely receive any kind of follow up. The only time that they've ever followed through was one time when they called me to tell me they couldn't get what I was looking for. When I go in and ask for an update, I'm typically told that they "haven't heard anything".

Overall, the service is disappointing, considering that with their decent prices (typically in the range of $1 or more LESS, per 4 or six pack, than the top store in the area), they could be kicking butt!

All in all, it's a decent selection with decent prices. I just wish they'd put a little effort into it if for no other reason than to give the top store a run for their money. More competition would be a benefit to all.

Check it out if you're in the area.