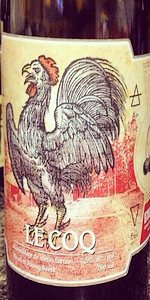 750ml bottle - a sour rye beer, aged for up to 2 years in Banyuls (a French dessert wine) barrels, and then finished for a month on sour cherries. Hoooo-kay!

This beer pours a clear, bright medium magenta colour, with a teeming tower of puffy, loosely foamy, and fizzy light pink head, which leaves a bit of falling wave splash lace around the glass as it quickly blows off.

The bubbles are pretty lacking in their underwhelming frothiness, the body a so-so middleweight, and sort of smooth, as the fruity tartness isn't strong or robust enough to care to meddle here. It finishes trending dry, due mostly to the nature of the base malt and the tethered fruitiness.

Overall, if everything matched up to the aroma of this offering, we'd be having a different conversation right now. As it is, the flavour isn't bad, it's just kind of plain, with any tart/sour character seeming like it went home early without telling anybody. Anyways, lots of promise, and a cool conceit, but just average in its results, I'm sad to say.

750ml bottle poured into tulip by some hoser a ways back, (from notes)

A clear reddish amber but it looks a little still, a couple tiny suspended particles but not much for head or lace

S lots of cherries, some brown sugar, raspberries, has a sweetness working well with the mild sour notes

T a little spice I can’t place, faint wood, still lots of cherries, has an interesting mix of sweet and sour, has a nutty vanilla thing going on in the background

M more bubbles then I’d guess after looking at it, no hint of booze and a little tannin like grit

O interesting brew, lots of cherry and the sweet malty goodness, barrel in the background, and a little spicy complexity adding to the mix

I’m a little surprised this one only scores 3.79 on BA, I know I’m often above the average but I thought this one was solid start to finish

Le Coq
Thanks BlogueDeBieres for this!
750 mL bottle poured into a tulip

O- This is a pretty good sour, cherries could be bigger. I really enjoy the opportunity to try this. 4

S-Spicy, probably from the rye. Some moderate tartness picked up here in the nose. Cherries. A bit of wood.

T-Not very sour. It doesn't have to be but after reading the description of this brew I was expecting something a bit more sour. Sweet cherry and rye spice-tang. Light wood. Plenty of sweet malt.

O-Tasty for sure but I think it left some potential in the barrel it previously resided in.

Had a bottle at Bar Volo.
part of me wonders if I got a dud bottle.

Very little carbonation. practically flat. zero head on it.
nose-wise, it smelled a bit like fish. maybe it was an unclean glass. cherry nose did not stand out.

Taste: some cherries, not much else. i'm a giant sourhead and this beer was a boatload of disappointment. not a hell of a lot of cherry, just a bunch of mleh. no real flavour and, in fact, it just tasted ungood. cannot describe what was wrong except that there was little that was right. think of really watered down Robitussin.

I will never buy this beer again unless the brewers or Keep6 assured me that i had a bad bottle. it was a very expensive purchase and we didn't even finish the bottle. did not like, which is a shame since i love Trou du Diable.

Bottle: Poured a clear deep reddish color ale with a nice foamy head with quite good retention. Aroma of oak, cherries and tart notes with light sweet notes is quite a treat. Taste is also dominated tart notes with some cherries and oak with some light residual sugar notes and very limited acidity. Light funky notes are noticeable but don’t play a huge role. Body is about average for style with good carbonation. Solid Flanders Red and something I would love to have access to on a more regular basis.