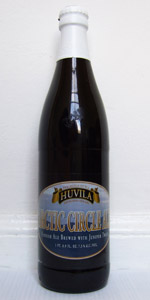 I expected more white snow from the Arctic Circle! Once you're done rolling your eyes and I have your attention back, let me seriously point out that the beer does in fact pour with very little head. I should also clarify that what's in the glass is not butterscotch pudding, though it kind of looks it, but actually a traditional Finnish beverage known as Sahti. Unfamiliar with it? So I am.

Having only tried a few prior to this I've little basis for comparison. But this one has a distinct bitterness in the aroma that's not quite like anything else; its special ingredient - juniper twigs - likely has something to do with it. This boldly malty, semi-sweet, semi-smoky bouquet is similar (by no means identical!) to the coastal, 'beach barbecue' smells of a briny, earthy, peaty scotch.

Arctic Circle Ale consists of a nice tapestry of flavours: spicy rye grain, softly bready barley, hints of sooty peat and kettle caramelization, as well as a little bit of citrusy, gin-like character from the juniper. It tastes like raw almonds and fruitcake at its base though heavier, more serious malt and bruised banana flavours usher those notions out along with some help from the alcohol.

Indeed, befitting to its name, Arctic Circle will certainly warm you on a cold night - this 7.3% isn't impolite but does seem the size of a dump truck. On the finish, any previous notions of sweet dried fruits turn immediately stewed. Alcohol doesn't interrupt or deter drinkability - sitting fireside with a heavy blanket, this warmth in fact adds to the enjoyment - but this one is open about its strength.

If this beer sounds different from anything else on the market it's because it is. Arctic Circle Ale is bound to be a true discovery for most people. A real tough one to properly assess without much experience with Sahti, the only opinions I can really share are that I enjoyed it and found it a deeply interesting ale. This one is absolutely worth the adventure and exploration.

Poured slightly chilled into a tulip glass. A dark coppery brown colour, quite hazy with minimal film but some decent lacing.

T - a malty start with a bit of caramel sweetness, a character a bit reminiscent of apple cider with a nice spicy rye body and then a full junipery flavour, caramel malt and honey, earthy bitterness, maintains a bit of spice to the finish. Well accentuated and flavourful.

M - nice moderately big body with a nice resiny spice to it, quite a pleasant juniper character, a light carbonation to it. Very drinkable.

Pleasant and complex. This is my first Sahti and this is a delightful and well made beer. Interesting combination of caramel malt with a touch of juniper resin and flavour, kept in really nice balance, with some rustic yeast characters and fruitiness, apples and mulled peach, a pleasant herbal finish with a bit of a medicinal quality but artfully balanced with the lingering malt. Well-recommended.

Hazy, dark amber color with tan head. Aroma has sweet caramel malt, brown sugar but also an astringent note. Taste startssweet with brown sugar and dried fruit notes, gets more bitter in the middle taste with some earthy/woody flavor and finishes even more bitter with a lingering charred wood note. Medium body with medium to low carbonation. Overall it's an interesting style of beer but not something to really seek out.

This beer looks good and smells great. Where is let me down was on the taste. While it is a decent beer, it does not taste like any traditional Sahti I have had, and I think that is what I was expecting. My wife is Finnish and every summer I wind up drinking Sahti homebrew. Arctic Circle seems harsh by comparison. Just my two cents worth, it might be a regional thing or local ingredients, but I have not had a Sahti that tastes this bitter.

Very different bitterness on this one, very different ale in general, I guess it’s a Sahti. Rye is nice, very nice mouthfeel, a bit fruity feel to it, quite a bit bitterness, but nicely balanced, and the malt gives very interesting new flavors that I don’t really resemble with "beer" or classic malt, but soy, maybe butterscotch, and some leather feel to it, taste is really full...

600 ml bottle served cold into a pint glass. Really excited to see a Sahti in the LCBO. Purchased for $5.60 CDN.

Appearance - hazy honey brown color, with an off tan head. A finger and a half of head with nice amounts of sticky lacing left behind eventually due to the great retention. A few visible bubbles, but hard to tell due to the cloudiness.

Smell - very herbal, with some low hanging berries, and a subtle inviting sweet aroma. Some flowery aspects as well. Something akin to molasses in there as well.

Taste - wow quite a it going on here. Starts off with and earthy fruitiness, the juniper shows up here, with some mild bitterness, before the bitterness turns more serious. Transitions into a bit of a smoky flavor, and there's little bits of molasses and toffee interspersed throughout. Quite tasty.

Overall - definitely a different experience than my first with a Sahti, but this is delicious, easy drinking and potent enough to warm you up a bit on a cold winters day.

500ml bottle into nonic pint. "finnish ale brewed with juniper twigs" (to be honest i've never tasted juniper before). best before aug 6, 2016, which is printed at the very top of the bottle's neck. poured on november 16, 2014

s: full of caramel and earthy scents. some fruity aromas like slight grapefruit, figs, and raisins, and a pinch of alcohol

t: starts off with a huge and distinct spicy/herbal-y/earthy quality, which i'm guessing is the juniper flavour, along with strong malty caramel. mid-palate exhibits mild raisin/fig notes, along with a potent punch of a kind of smoky taste, which is quite interesting. the finish (heh) has lingering herbal bitterness, with touches of caramel and smoke

o: an intriguing, flavourful beer. give it a shot

T - Following nose, with a big dark bread, a strong molasses line, and a tail of slight bitterness and alcohol.

O - Not, perhaps, my thing, but very well structured, and flavorful.

byronic from Canada (ON)