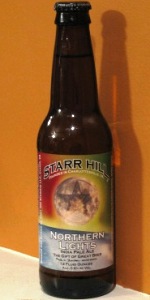 Second bottle of this one from the Starr Hill Loadout variety pack; bottling date is December 15th, 2014.

[most of old review trimmed to make room for the new one.]

Overall, while this isn't *bad* by any means it's also definitely my least-favorite from the Loadout variety pack. While the Grateful pale ale grew on me quite a bit between my first and second glass, my opinion on this one hasn't shifted much (though letting the beer warm a bit so that "leaf/grass" sort of flavor began to blend in with the bitter and more of the toasty grain sort of flavor came out was a slight improvement over drinking it right out of the fridge.) I won't have trouble finishing my last bottle of this one, but I'd still rather just have another bottle of the pale ale instead.

Look is similar to the older version -- dark golden/orange color, with lots of bubbles visibly rising up from the bottom when I shine a light through. Nice fluffy-looking white head on top, shrinking into a fairly substantial coating with a thick ring around the inside of the glass. As noted in the old review, a good bit of lacing is left behind around the edges as the beer level in the glass gets lower and lower. As appearance goes, it's a nice-looking but not a drastic change from the previous version, so I'll be leaving this at a 4.

Smell is a significant step up from what I remember of the old version. There's still a definite pine element present, but there's a stronger "something fruity" going on (I almost want to say pineapple... definitely something tropical-ish) and also a bit of a caramel-like sweetness in the background that blends in very nicely with the hoppy smells. A nice step up from the relatively faint smell of the previous version.

Taste is a bit different -- the pine isn't as immediately apparent, instead I'm getting a nice malt flavor at first and then the piney and fruity flavors coming in afterward, with the sweetish pineapple-like flavor being the last to arrive and then everything fading into a blend of almost caramel-like malt and leafy bitterness on the end. Very piney burps coming up after drinking just a little of this one. Seems to play nicely with food as well, not changing too much after I've had a few bites of my fettucini. Not as drastic of a change as the smell was, but still an improvement over the old version.

Mouthfeel is pretty nice but doesn't stand out in any particular way, so I'll leave my score as-is there.

Overall: I've got to say that I prefer this new recipe over the old version, though I'm not 100% sure how much of that can be attributed to the changes to the beer and how much is my taste buds being more fond of IPAs now than they were the last time I had the old recipe. Either way, this is a pretty nice beer and I'm finding myself enjoying it much more than I did the last time I had it (before the recipe change.) The smell of the new recipe is especially nice -- the old version came across as a little weak in that area to me, while this one had me sniffing it for several minutes before I started drinking because it just smelled so good.

S= hops florals out the wazoo, with bready-dough depth.

T= mega-bitter hops with plenty of good taste and quality. Much less in the citrus-hops (Chinook et al) category than many of the recent uber-hops micro offerings the past few years. Outstanding IPA. Great depth, boldness, and also nicely bready balanced.

D= only the uber-bitters keep me from rating this higher than "just a 4.0" on the scale.

A - light gold with good foam.
S - Hop mash smell
M- smooth good IPA mouth with a strong start, slit after taste
T- hops, butter, sugars, earthy
O - A good IPA, drinkable and enjoyable. Not the best ipa, but not bad. Would get a six pack from time to time.

A bottle poured into a mug.

A: The appearance is pretty average for an American IPA. The beer is a typical color with a nice lasting head and a little bit of lacing.

S: A very mild citrus aroma is evident with a little sweetness. This smells closer to a pale ale than an IPA.

T: The taste is very light for an American IPA and not aggressive at all. The flavors are mild and subdued and certainly not in your face. A light hop flavor with a little bit of lasting bitterness. Ripe fruit and a decent malt flavor are quite evident in the beginning of the flavor.

O: This is not a bad beer at all, but it certainly not a great one. It seems pretty generic and boring but it's not a bad beer. This is my first offering from this brewery and actually the first time I have ever heard of them.

Purchased local at the Whole Foods--Charlottesville, VA. Best by date of June 2010 on bottle.

A-Bright golden copper with a medium white head that reduced to a thin cap and left attractive lace.

S-Light citrus, some caramel and a bit of mustiness. Rather light overall and I wish it were a bit "brighter.

T-Much like the aroma there is a nice citrus hop presence but it's too light and gets washed away by the sweet caramel malt. Bitterness becomes a bit harsh with an herbal quality with warming.

M-Medium-light bodied sharp and crisp with good lingering bitterness and a drying astringency.

D-Certainly decent but doesn't light my world a fire. I wish the hops popped more and had a more enjoyable bitterness profile.

Northern Lights pours a nice reddish-amber color, with a substantial head and good lacing. The smell is hoppy for sure, mostly a citrus and floral character with some sweet malt in there. The taste compliments the aroma very well. It's not overwhelmingly bitter. The floral and citrus notes give way to a slight malty sweetness that you might expect from an amber or red ale. Mouthfeel is well-carbonated on the tongue and foam on the swallow.

A good IPA, a great blend of hops and malt.

This is a brew I've been meaning to try for a while so this seems like a good time. Pours a bright orange brown with an opaque body and a solid cream colored head. Nose has varied citrus and floral notes and a general spicy hoppiness.

The flavor is rounded throughout the sip and features an impressive balance and some late hops in the aftertaste. Citrus, grimy floral and a hit of pine. Carbonation is maybe a little high but seems to fit this beer. Somewhat creamy in texture.

Not a beer to go across state lines for but well worth trying. Nice balance, medium bitterness, and fairly easy to quaff several.

Run of the mill IPA. Sucked this one down straight from the bottle. Hoppy taste nothign really to comment about this beer. I got this out of the mixed packed that Star Hill makes and this was a marginal IPA which was on par with the Red Ale, and Imperial Stout in the case.

New Recipe reviewed 9/5/2015
A - Clear gold body with an off white head.
S - Stone fruit, hop over light graininess.
T - More assorted stone, citrus fruit. Medium intensity.
M - Medium bodied.
O - An improvement over the last recipe, but still really just doesn't live up to the rest of the fantastic IPAs SH has put out or other year round IPAs.

A - Deep orange, thin white head.
S - Faint notes of citrus and grass. Actually having to really get my nose in there to discern.
T - Light hop flavors of grass, pine, a citrus peel. Fairly astringent.
M - Medium bodied, refreshing finish.
O - Nothing particularly wrong with the beer, but far from being intense enough to be a go-to American IPA.