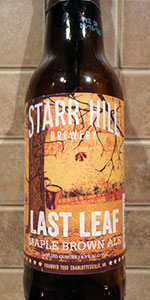 Appearance: The beer has a nice ruby red and brown mahogany body with good clarity. The head is short and creamy textured with a tobacco stained yellow color. There isn't much head retention but there is some mild lacing. The color of the beer is very nice.

Aroma: There is a nice strong maple scent mixed with what smells like toffee.

Taste; Up front there is a nice toffee flavor which carries through to the end. There is a light sweet maple flavor in the middle which is also met with some light earthy bitterness.

Mouthfeel: It is nice and smooth with a wet and sweet finish. The body feels a bit light but the smoothness of the beer makes it enjoyable to drink.

Overall: It's a good beer with some nice flavors and a great aroma. I could see myself picking up a sixer of this from time to time. I would recommend it to those who are looking for a nice mild brown ale with a touch of sweetness.

Pours a fairly clear amber reddish-brown with little head.
Nothing too noticeable in terms of smell, a very mild vanilla and brown sugar.
Taste is overall very pleasant and easy to drink. Taste is similar to smell, only much more noticeable.... vanilla, brown sugar, maple, but not overly sweet.
Good carbonation.

This is a very drinkable beer and overall very pleasant. There’s nothing that stands out in particular that would make me call this an outstanding beer , but it’s an extremely pleasant Autumn beer and definitely worth a try.

Very nice Brown. As advertised, this one has lots of nutty brown ale goodness layed overtop sweet maple syrup. Pretty much what I expected, and I wasn't disappointed.

Bottled on 8/22/16.Pours a chestnut brown with a thinner light beige head atop,decent color but not much head to speak of.Sweet brown sugar and maple really stand out in the nose,smells quite sweet.The maple is a big player on the palate along with mild vanilla and roasted nuts,quite a sweet palate.Eh it's a decent dessert pairing beer but not one to drink much of,it feels weird to drink a beer of this ilk when it's this warm out....

Taste is similar with more lean towards the vanilla and woodsy maple note with molasses and caramel in the middle, toasty malt throughout with some additional light chocolate malt.

Mouthfeel is moderate at first, stronger carbonation and dryer than anticipated finish.

Overall a lightly sweet brown ale with moderate maple notes in the form of molasses, earthy/woodsy notes and vanilla.

Pours brown against my white screen, but shows amber against a yellow lamp. Initial 3 finger tan head that recedes to a ring around the glass. Light haze.

Taste is predominately maple syrup at first, but the nuttiness develops as the beer warms.

Moderate in body, and syrupy in feel, but more drying than sticky. Light warmth.

Unique in my experience. The maple makes the beer.

The mahogany brown colored beer pours out into a Stalla glass with a 1/4” off white head that soon recedes and disappears. At first sipping leaves a few scattered patches of lacing on the sides of the glass but by mid-way through the beer all the foam has gone.

The aromas include some maple sugar, some vanilla and a bit of nuttiness. There’s also some brown sugar or toffee in the background.

The flavors are as expected from the nose with the maple sugar, the vanilla and the nutty flavors. The malt sweetness is a bit like brown sugar or light toffee and there’s no bitterness to speak of.

The mouthfeel is on the light side of medium bodied and gentle with some light finely bubbled carbonation. The finish begins as the maple and vanilla being to recede into the background created a light semi-sweet nuttiness. There’s no real bitterness here to speak of.

A pleasant enough beer that I’m happy to have tried but that I won’t be seeking out in the future. Both the aromas and the flavors are mild but noticeable and the sweetness is light and does not cloy. Mild, reasonably flavorful, pleasant but not challenging in any way.

Pours very dark red-brown with a decent tan head. Excellent, slightly sweet mix of maple, vanilla and brown ale aromas. The flavor has these same qualities but with a bit too much vanilla.

Pours a clear garnet color with a tight, mocha head that leaves little bits of lacing.

Smells of maple syrup and some toasted malts.

Overall, this is nicely done, but the maple may not be for everyone.

On draft in a shaker pint glass

T---More maple here than in the nose. Sweet & malty.

F---Not as thick as I was expecting. Just the right amount of carbonation.

O---A solid fall beer. Nothing special, but I'm watching the squirrels scamper around on the lawn burying nuts under my giant old maple tree, and this beer fits that.

Pours a dark chestnut color. The head is a finger high and mocha in shade. It looks fizzy in general, nor does it have good retention. No real lacing sticks to the glass.

Well, the aroma offers a good amount of maple syrup, I'll give it that. The problem is how there's little beyond that. Only a gentle touch of nuttiness and a metallic quality show up. While that one prominent maple note is good, it seems like the beer beneath it really isn't.

The front end of the flavor profile displays a nice amount of maple syrup. I'm pleasantly surprised by the touch of ale esters around the middle, but a metallic finish spoil the nice qualities of this beer. Even beyond that, it's blandly constructed and not well balanced.

It has a slender yet sharp texture, aided (or hindered?) by the fizzy carbonation. The finish is off-dry, but the metallic taste means it's a bit less drinkable as it could have be given the general feel and timid flavors. Still, it *is* fairly easygoing at the end of the day.

Starr Hill usually makes lackluster beer - and this is pretty damn lackluster, indeed. It isn't abhorrent, but neither is it particularly good. The base beer is especially underwhelming, with the maple syrup presence only enhancing the general quality of the brew slightly. This one can be skipped accordingly.