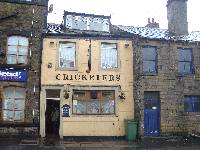 With the Livery Rooms and Boltmakers under our expanding belts, Stop #3 on our Keighley Pub Crawl was only a short stumble across the road and up a side street.

Built in 1828 and originally a part of three cottages, the orangey-cream painted frontage of the Cricketers is now wedged between two dark soot stained stone buildings and to put it mildly, it stands out, so much so that it is easily spotted from the pavement even at an acute angle. A former Timothy Taylors house, it was purchased by Worth Brewery who immediately set about a rather unique and eclectic refurbishment back in 1999. From the outside a small doorway sits to the left of an old fashioned wood framed three pane window that proudly displays the (former) Worth Brewery name. The second floor has two traditional stone lintel windows which in turn has the hanging Pub Sign between them. The hanging Pub Sign was painted by a local artist and sports a gorgeous action pose of Yorkshire & England Batsman Sir Len Hutton in full swing, a throwback to the good old days of cloth caps, linseed oil and leather on willow. Aside from this, a large single stone above the ground floor door and window is carved with the word Cricketers, now painted in black to stand out from the painted exterior.

The front door is always open thanks to an interior one. Inside, the refurbishment is still evident, yet a lot of the old character, as I remember it from its Timothy Taylor days at least, is plain to see. The single room pub has worn in nicely and it feels older than it probably is. Immediately to your right the area in front of the window is clad in green stained wood and the floor is raised up about 6, and it doubles as a stage when not being used as a drinking area. The L-shaped dark wooden bar sits off to the right hand side and takes up the back right quarter of the single room. Bare stone walls are adorned with lots of sporting memorabilia, breweriana and assorted bric-a-brac like brass port holes. Opposite the bar, down the left hand wall, the seating is comprised of old Tram style seating which includes the original associated overhead luggage racks, very unique, the only time I have seen this kind of seating in a Pub.

Serves 5 Cask Ales; during my visit they were Moorhouses Premier (3.7%), Adnams Bitter (3.7%), Boddingtons [now brewed at Hydes but still worth missing] (3.7%), Arundel Stronghold (4.7%) and Saltaire Special (5.2%) with Westons Organic Cider bringing up the rear. I opted for the Saltaire Challenger Special, damned fine stuff and drinkable for a 5.2% brew, and at only £2.10 great value for money. Prices were very reasonable, the Moorhouses was £1.70 a Pint and only one of the five beers cost more than a Double-Nugget, eat that Londoners!! Four other flip-taps serve keg crap like Guinness, XXXX, Strongbow and Stella. A small but well thought out bottled collection is interesting and included beers from Germany, Italy, Poland and several from Belgium. Food is very limited, but includes solid Yorkshire Fare including Award Winning Pork Pie & Peas and Baked Potatoes that are all kept in an old black lead warmer that is located on the end of the bar and has a relief of Queen Victoria and a date of 1837 cast on it, though the Pies are fresher than that I am reliably informed.

Service was cheery, upbeat, attentive and unflappable, even when a dirty dozen drinkers piled in and upset the locals quiet Saturday afternoon. A basic back street boozer that holds many happy memories for me, indeed, our group had a good time in here during our short 1 Pint stop, it would have been nice to stay longer but sadly we had to move on.

A local CAMRA Pub of the Season winner in years past, and well worth a visit, especially as its literally only staggering distance from the awesome Boltmakers.

Pop in here and knock a few Pints for Six, Howzat!!

Cricketers Arms in Keighley, GB2, United Kingdom
Place rating: 3.7 out of 5 with 1 ratings