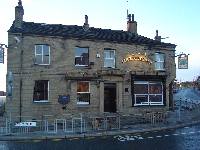 After a serious Pub Crawl of Keighley, and a quick stop in the ever reliable Corn Dolly, it was onwards and upwards to one of the newest additions to the Real Ale scene in Bradford.

The Cock and Bottle is located high on the brow of Barkerend Road (A658) at the junction with Otley Road. Dating from the early 1820s, the stone building is one of those lovely stand alone establishments that just has presence with plenty of Victorian decadence about it. Some minor research reveals that the Cock & Bottle brewed House Ales until 1927, when the Pub fell into the hands of the well known Melbourne (Leeds and Wakefield) Brewery and subsequently Joshua Tetley & Son in the 1960s. After various intermediary owners the Cock & Bottle reopened on Friday 15th July 2005, in February this year the old Brewhouse was refurbished and put back to life as the William Greenwood Brewery, brewing takes place at three levels and follows the Tower Brewery principle.

Two storey stone building has an old style slate roof. The entrance is situated in the middle of the frontage that faces Barkerend Road. Once inside, you are greeted with a gorgeous main bar to your right, with rooms and seating areas running off from here. Nicely furbished, the interior is a throw back to the good old days. Old fashioned round wooden tables in front of upholstered seating. Some sporting memorabilia reminds you that you are in Rugby League country.

The range of Real Ales is quite incredible; my beer hunting friends tell me that the range can be as high as 13 on weekends, but as low as 6 or 8 during quieter midweek periods. We had a selection of about 10, and a damned good one at that. I recall a couple of the local William Greenwood brews as well as rotating Guest Beers, many from Yorkshire Breweries but they also included some better known ones from further a field. Real Cider and the usual array of Keg Beers for those that need want an over-carbonated over-priced yellow libation. Quality of the Real Ale was good, I heard no negative comments, often with so many Cask beers on sale time and low sales become the enemy of Quality Assurance, but not here it seems.

Service was up there and obviously used to handling crowds on a weekend. Prices were run of the mill and the general ambience was warm. Sadly we were pushed for time here and had to get a train back to Wakefield, so I didnt get as much time as I would have liked to reconoitre the place, but we had to get the last train back otherwise we would have turned into Pumpkins. A real shame, because the Cock & Bottle is the sort of Pub that you could easily while away many an hour and never drink the same beer twice all day. Holds regular Quiz Nights and hosts the Worlds Oldest Folk Club (allegedly) and other Live Music occassionally.

The last few years have not been kind to the Cock & Bottle, it was even closed for a year or two, but thankfully the involvement of the William Greenwood Brewery has seen the splendor and attraction of the Victorian Beer House brought back to life, it is great to see such a fantastic structure that holds so much history positively revitalized and injected with massive doses of enthusiasm! Well done William Greenwood Brewery.

Install the Brewery, serve an ever changing range of well kept locally brewed and Guest Real Ales, and they will come..and they do, in droves!

Highly Recommended, a DO NOT MISS when in Bradford.