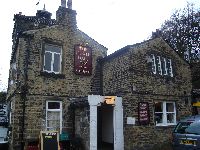 With several pints and visits to two newbie Pubs in Sowerby Bridge (The Shepherds Rest and The Works) in the bag, it was time for our party of six to visit an old favorite for the next Pint. From the The Works we turned right outside onto Hollins Mill Lane past the Sowerby Bridge Victorian Swimming Baths and next door Library; a simple 1 minute walk had us at the next stop.

The Puzzle Hall Inn in Sowerby Bridge is nothing short of a legend. It is hard not be impressed by the exterior of this blast from the past, even with its darkened stone frontage during a typical English April Shower. First opened sometime in the 1700s the Puzzle Hall oozes history. The Pub itself is a collection of interlinked buildings and some smaller extensions, each with its own worn stone roofs and chimney stacks. The piece de resistance is the splendid Tower that overshadows the ensemble of buildings that make up the Puzzle Hall Inn, this part dates from early 1800s and was the centerpiece of the Puzzle Hall Tower Brewery until it closed.

The interior is a head lowering gem, a handful of maze like rooms on slightly different elevations are testament to the ad-hoc collection of buildings that form the synergistic mass of the Puzzle Hall Inn. A rectangular main room stretches back and greets as you enter, this is where many of the Live Music nights are focused. In the right hand wall an entrance leads through to the bar on your right, to the right of bar is another smaller room, often full of locals. To the left of the bar lies another doorway that takes you through to the freezing cold toilets.where the large old style communal troughs in the Gents are filled with lots of those now almost worthless piss-stained 1 and 2 pence copper coins, all spattered with an interesting collection of curly pubes from the locals and the odd even more annoying silver colored 5 pence pieces. Classic! The walls are littered with photos of days gone by, music posters, the odd bit of bric-a-brac, but the most impressive decoration in here is not material but the intangible veil of history that fills the many rooms with the echoes of ghosts of drinkers past.

The Puzzle Hall has had many an owner over the years, including Vaux for most of the time I drank there, but now it is in the hands of Pubmaster, at least according the exterior signs, though thankfully the beer range does not seem to have suffered from this change in ownership. On my visit they had 5 Cask Ales on Beer Engine: Goose Eye Special (4.2% @ £2.35), Young Bitter (3.7% @ £2.05), Green King IPA (3.6% @ £2.05), Timothy Taylor Landlord (4.3% @ £2.35) and Caledonian Flying Scotsman (4.6% @ £2.35). Keg Grolsch, Guinness, Carling, Hoegaarden and a Cider bring up the rear. The Goose Eye Special went well with a packet of Cheese & Onion Seabrook Crisps. Refuses to serve alcopops!!

This place has it all; five Real Ales including rotating Guest beers, a multi-roomed unspoilt interior, coal fires when its cold, a beer garden when its warmer, full of local characters, great service and plenty of social events such as Quiz Nights, Blues Jam Nights, Games Nights, Open Mic Nights and the vaunted Curry Nights on Wednesdays which have been a regular for 15 years! Hosts regular Live Music and other community driven events like the annual Rushbearing and the odd Folk &/or Jazz Festival.

A truly outstanding firm favorite from the good old days when I first starting drinking Real Ale during many beer festival & pub hunting trips on carefree weekends with like-minded friends, long before some of them got married and had more serious things to do. It is great to see that although it has changed ownership once or twice since then, and almost burned down completely in the Easter of 1995, that it is still firmly in good hands. A very unique establishment that is well worth devoting an entire session to discovering! DO NOT miss the Puzzle Hall Inn when in Sowerby Bridge.

A *Highly* Recommended stop, no more than 5-10 minutes walk from the Railway Station and now an easy one-two with the nearby newbie The Works.