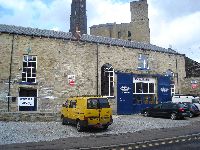 After a finishing off a superb Pint of Titanic Black Ice at The Shepherds Rest, it was soon time for our party to head back into the sunshine that was basking the Calder Valley, even lighting up the 253ft tall usually dark brooding Wainhouses Tower which overshadows the countryside high from the surrounding hills.

The Works was yet another new one on me; it seems that our second port of call was also another recent newcomer to the Real Ale scene in Sowerby Bridge. From the Shepherds Rest we headed back down into Town on Bolton Brow road, which then turns into Wharf Road & eventually into Town Hall Road. As the road curves off to the left, Hollins Mill Lane is the right, head down here, The Works is easily spotted on your right & set back a little from the road, directly opposite the Sowerby Bridge Victorian Swimming Baths.

From the outside, it is hard to miss the Works. Set back from the tight constraints of Hollins Mill Road which has the dreaded No Parking double yellow stripes, so the fact that the front doubles as a car park which accommodates about 6 vehicles is helpful. I walked past this place for some 15 years on the way to the (very) nearby Puzzle Hall but for the life in me I cannot recall what this was in a former life. A mill of sorts most likely, the exterior has been sandblasted & freshly re-pointed so the stone frontage has a clean refurbished look that befits the interior alterations. The slate roof has been replaced in the original old style, as indeed have the lovely multi-paned windows. Two tall arched paned windows sit either side of two large blue wooden sliding doors which are decorated with the works logo - these were open during my visit & revealed a wooden frontage which also had a white wooden sign above with the word Works painted in blue, all of which looked like it should be the entrance, however, it isnt. The entrance is set to the left of this, up a low gradient ramp to an unassuming portal which does confuse first time visitors (like me) but at least allows easy access for wheelchairs etc.

Once inside, the real work that has been put into this old building is revealed in all its glory. Exposed brick work & refitted wooden ground & 1st floors, all in the original style. The ground floor has plenty of open space & is laid out in an inverted T shape. To the left a large L-shaped bar is set back & has an modern look, whilst to the right the restrooms sit underneath & to the left of a large wooden staircase which gives access to the 1st floor. This in turn offers views of the ground floor space. The 1st floor & staircase part was still under construction & closed during our visit, but what I saw looked impressive. Décor is clean, solid wooden tables & chairs, whilst stools & high back seats take up about half of the bars frontage, nice touch that, it allows the barflies to drink in peace at the bar & lets other punters get served without interference. Though I noted on my visit that all 5 of the guys drinking at the bar had adopted the classic standing bar stance & had pushed the bar seating aside  thats Yorkshire!! Lots of old breweriana decorates the walls with an old Whitakers Ales painted wooden sign with its Cock O the North trademark being of most interest. A host of Victoriana, everything from clocks, typewriters, cash registers & furniture, tastefully fills the rest of the gaps on the walls & shelves, but its not over done.

A bank of three Beer Engines with the familiar green & gold Timothy Taylor handles served Landlord, Golden Best & the Dark Mild. Another bank of three Beer Engines served Guest Beers, I dont recall exactly what they were, unusual for me to not note them, but it wasnt my round & I was rather taken with the fascinating interior so much so that I opted for a Pint of Golden Best & wondered around a bit. I do recall that several of our party opted for the Guests; there were no complaints in that department viz choice and quality. Other continental brews were available on tap, including offerings from Germany & Belgium. Service from the woman behind the bar was lively & fun, she knew who to serve & when with no problems from the mini rush from our small party during what was a rather quiet Tuesday afternoon.

With Pints in hand, our party of six decided to sit below & in front of one of the front windows, right next to the lovely large open redbrick fireplace which has an original old bright red Post Office Mailbox set into the brickwork. A sign on the wall reads If you like our beers tell others.if you dont tell us. With the sunlight streaming in reflecting off the particles in the warm interior air, chatting to valued friends & a top notch pint of Timothy Taylor Golden Best in front of methings could not be much better.

All in all a quality refurbishment that sympathetically mixes the old with a touch of modernity. It works too, if you pardon the pun.

A Recommended one-two with the nearby Puzzle Hall Inn!

Works, The in Sowerby Bridge, GB2, United Kingdom
Place rating: 4.33 out of 5 with 1 ratings