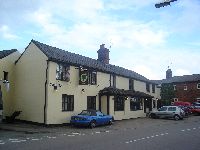 The drive back from Belgium to Northern England takes the best part of a day usually. The last day of the 14th Annual Wakefield CAMRA 2006 Easter Belgium Trip is spent driving through Belgium, France, hopping on a Car Ferry and taking the long drive up to and past London and onto the M1 Motorway.

Our Coach Driver has to stop by law, so we always try and find a decent Pub to grab an afternoon pint - this is not an easy task given that we dont want to stray too far from our intended path home. This year we tried somewhere new, the Royal Oak in the village of Crick, Northamptonshire.

Only a few miles from Junction 18 of the M1 Motorway, Crick is a stunningly gorgeous village full of thatched cottages and history. The Royal Oak (one of 500 or so bearing this name in the UK) is on Church Street a tight winding road that is just off the (A428) Main Street.

Dating from around the 1790s, the pub has undergone some changes throughout its long history but retains some of the original fittings and a lot of the character from its past. A two storey with a freshly painted cream colored exterior has a centrally located entrance. A thin corridor greet the Imbiber, lots of dark woods and creaking floors add immediate atmosphere, as does the small door on the left that brings you into the bar area. The interior is a nook and cranny affair that soon gets crowded. The bar is a strange arrangement that is higher in elevation than the front room, as such the bar is actually some 4 feet tall and it feels like youre being served by Giants. The interior opens out, a relaxing but small bar area which has a few tables and chairs; this opens back in an L-shaped fashion to another room that offers more seating and access to the games room and toilets which are out back up some stairs. The games room is a real gem, a wood paneled affair that houses a Pool Table and a Dartboard, one wall is lined with wooden bench seating, has a lingering feel of a faded Gentlemans club.

Beer range is focused on Cask beer but there are the usual Keg taps that serve the usual range of pseudo Lagers, fizzy Cider and Euro imports. Much more important is the fact that it has four Beer Engines serving a great range of Real Ales. I started with an Archers Give us a Clue, a 4.4% brew brewed for sale during the World Finals of the Snooker Championship being held in the UK at the time. Two other rare offerings included Potbelly Beijing Black a 4.4% dark Mild and one from a newly opened Brewery called Atomic Fusion, a 3.9% bitter style brew.

We had arranged in advance to have to Sandwiches laid on for our visit, and the food was fair fare, the usual mix and style of Sarnis, good stuff. Not sure what the food offerings usually are, but it seems that at least Lunchtime meals are available.

The Service was great, given the constraints of the low-ceilinged Pub and 30 thirsty drinkers on a tight schedule. The Landlord was affable, incredibly friendly and enthusiastic about the beer range that he had and freely told us of the beers that he had stillaged and ready to go in the Cellar, even offering to jug some up from the cellar if we wanted to try some, which he did. The locals didnt seem to mind our party invading their local hostelry either, always a good sign.

A fantastic locals Pub which extends genuine hospitality and which is really trying hard to offer a solid range of changing craft beer. It also holds Beer Festivals. Well worth a visit, and all the more remarkable that it is literally only a mile or so from the M1 Motorway; taking a quick detour the next time youre bored driving nearby, wouldnt be a bad idea.