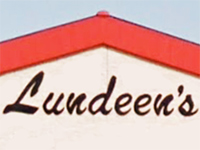 View: Place Reviews
Reviews: 5 | Ratings: 8 | Log in to view all ratings and sort
Reviews by rossracing:

I'm going off the reservation here, but things just might have changed a bit at Lundeen's since the last reviews were submitted in 2011. This place is rather nondescript on the outside. About all you see is the drive-up window and the heavily-tinted windows on the side of the building. But take a walk inside and you'll be met with a fantastic selection of wines, spirits of all types, and craft beers along with the standard-issue macros. Most (all?) of the beer stock is kept refrigerated, with the items neatly organized in racks along the wall. Clean, well lighted, easy to navigate. The staff person on duty was very friendly and helpful. I stopped here as an afterthought and was very pleasantly surprised at the selection and service. This is a "must-stop" if you're in Sycamore.

Stopped in here recently on the way back from my folks... Always like to drive stop and local bottle shops to see if any surprises can be found... Staff were busy, so didn't really interact with them... Took a quick walk through, nothing crazy jumped out at me...very similar to the Lundeen's in St. Charles... picked up a couple of random things to bring home, as I don't like walking out of a store empty handed....I don't remember, but I swear I saw some Ballast Point here though.... either that or it was in DeKalb..

Not a bad place for a small(er) Illinois town - decent selection on craft beers. Found Hopslam mini-kegs here in the past, for a lot less than Binny's would charge. Also got lucky and snagged a few KBS that were on the shelf in March this year. Also was able to get a few four packs of Bourbon County Stout after they were long gone elsewhere. Other than that, they have all the "typical" craft beers you'd expect to find in Illinois, with some surprises sprinkled in (see above).

Stopped here right after Lundeen's in Dekalb. They have a drive-thru!! By comparison, this shop was a little bit more disorganized with odds and ends on a freestanding rack between the coolers and the long beer aisle. The warm shelf started off great, noticed a BA review on the breakfast stout, and many quality beers, though not as many as the Dekalb location. The aisle ended abruptly halfway to the back of the store, fading into wine coolers and alcopops. Metropolitan was here, but not in Dekalb. Also Big Sky, Allagash, DFH, Founders, Bells, and others. A huge garish monk figure stood smack dab in the middle of the beer aisle. The bickering couple behind the counter stopped long enough to ring me up, but didn't offer a hello or any help on the floor.

This place is a big new building with a red tin roof so it really sticks out. The beer is straight back from the door and there are lots of coolers that run along the wall with stacks of cases in between the coolers and the shelves of 6 packs. Everything was kind of disorganized with some beer in the cooler which was also sitting on cases while other beers from the same brewery were found on the isles.

I was shocked to see beers that I haven't seen in months. They had lots of Gonzo Imp. Porter with all the Two Brothers special beers from Cane and Able to Philosophers stone. They had a discount rack with several 6-packs of 2005 Anchor X-mas ale. The also had a large selection of Bell's with everything except Two Hearted. The Dogfish Head line had many great beers that I haven't seen in a while aswell.

They had a good list of import beers and Belgian ales that looked clean and fresh with BA hangtags on many products with some of their own hang tags aswell. This place was very clean and well taken care of on the shelves and the coolers both.

If you are looking for some beers that you can't find around it is worth a road trip from Chicago.

Lundeen's Discount Liquors in Sycamore, IL
Place rating: 3.79 out of 5 with 8 ratings