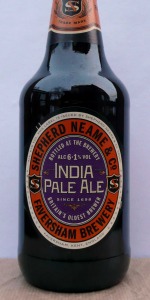 Notes:
View: Beers
Reviews: 23 | Ratings: 78 | Log in to view all ratings and sort
Reviews by Decko:

L- Mid chestnut, clear, pours with minimal head.
S- Trad., typically ale'ish.
T- Nice, good toasty malts, and with sufficient ABV% to bring a balancing body with it. Then after a couple of seconds on the palate the beery stars align and you get that warm/rich zing, which usually only happens at materially higher ABV%s
F- It walks the line of trad-hoppy dry and richer/deeper ale perfectly down the middle. If you want a trad beer with a bit of clout, but the hops with it so as not to dull the palate this might be it.
O- It's a lovely beer, one of the better 'new ones' I've had recently, and IPAs (even trad ones) are not really my home turf, tending more to mellower ales. It's like an deeper complex ale with an added layer of hoppy complexity but done with gentle balance. Very good, would happily buy again.
500ml bottle. BB: 02-2020 etched in glass at the neck.

500ml poured into a pint glass

Look: Deep, coppery red-brown with no trace of haze or sediment. Good fingers-width of white head which drops down to a foam cap over time. Some lacing left behind, but nothing extensive. Not massively fizzy.

Smell: This is definitely an English-style IPA, no doubt about it - hops are well in the background and the main smell is one of seet, roasted malts and a hint of nuttiness. This isn't the sort of thing that's going to assault your olfactory system so you're going to have to try pretty hard to discern anything other than the 'basics'.

Taste: Again, more malts with a light hoppiness which sticks around long after the malt flavours have faded away. On top of that, there's some fruitiness and nuttiness which overlays the predominantly bitter flavours. Overall, fairly bitter and on a par with similar British beers.

Feel: Medium body and bitter from start to finish. At 6.1% there's surprisingly little alcohol to be tasted or felt.

Overall: A bit 'meh' - as a supermarket IPA it does the job since it's pretty easy to get hold of. Along similar lines, this is probably about as 'traditional' a British-style IPA as you're likely to find. That being said, there are better examples of the style out there and they're not the sole preserve of the trendy craft breweries either. A good 'default' pint but nothing much to write home about.

Too malty, definitely not for me.

Shepherd Neame have created some of the finest beers and ales in England so obviously personal taste dictates a pecking order. Excellent smell and as with all their beers a good looker. If I have a reason to rate it lower that Spitfire, Early Bird et al it is that it is probably too strong. In my opinion English Ale and Beer is at it best in taste and flavour at between 3.5 & 5%. This is a specialist beer rather than a refreshing hoppy/malty IPA.

Do I sense minerals, even soap, in the taste? Weird - or maybe I just have used to enjoy different hop profiles. From the tap, this one, so the reason might ne there, too. People have described the taste as nutty, with a nice malt body. Maybe so, but it might just not be my cup of tea. Bitterness and aesthetics are ok.