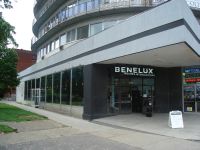 Notes: To get there by subway: Green line, Place des Arts station. Go north up the hill to Sherbrooke street, then go east about 2-3 blocks. It's on the ground floor of a big apartment complex.
BEER STATS

After a flying visit to the Brutopia, it was soon time to head over to one of the newer Brewpub additions in Montreal. The walk is easy enough, from Brutopia just head up to Sherbrooke Street, and then it is maybe a 10-15 minute amble.

BeNeLux Brewpub and Café is set below a large oval shaped tower block. The unassuming exterior has a white sign above the door and advertises the place as Benelux Brasserie Artisanale et Café.

Located in what used to be a bank, the stern simplistic interior does somehow reflect this. Indeed, the old bank vault is set into a dark blue tiled wall right at the back and this is now put to use as a small room. Erica decided to check out this rather cool chill-out room, dark black leather, darker walls and a ½ Watt lightbulb set into one of those trendy paper slatted light coverings means that you may need your Infra-red glasses if you wish to stay in here for any period of time. The vault door is thankfully wedged open and permanently bolted ajar and cannot be closed; some byelaw dictates this to be the case. The rest of the décor is Spartan, functional and utilitarian with a minimalist feel. Sky blue high ceilings reveal all the workings and routing of the Air Conditioning and the cold floors help one to escape the midday heat. As you enter from the street side entrance, the whole left hand side wall is in fact a range of tall windows which allows the light to flood in, and the imbibers to watch the world go about its business. The stainless steel topped bar is edged with high quality hardwood and sits at the back to your right, sweeping out an arc of sorts. A small raised area in front of this is situated nearby a corridor which leads to a handful of doors, all unmarked, one or two of these are the toilets.aah but which ones?!** Fittings are predominantly stainless, and the floor space is cleverly laid out with both tables & chairs, as well as many stand-up lean-to fittings for the busier times, the sort of space saving place to put a drink so often used in nightclubs. It wasnt until BA Goldorak joined us and pointed out the light fittings hanging over the bar that I realized they were made from upturned Pint glasses, another effective simple decoration that sums up the entire modus operandi here. I noted that lots of black heavy duty plastic kegs with the words König-Brauerei were stacked and openly stored in the bar area in many places.

Beer range was listed on a stand alone chalkboard resting on the end of the bar against the wall. It listed the following brews/prices:

In addition to the four house beers, they had the following guest brews also;


I sampled the Wit and Pale Ale; both were OK, a little too cold at first though. Service was good, but it was quiet when I was here with BAs Erica and Golodorak, it still managed to exude a very friendly atmosphere though.

Looks young and feels it, still a little unorganized in some aspects, for example no clearly labeled toilet signs and one of the servers even had no idea what was on each tap as they were unmarked!!, but this place certainly has great promise. The beers were so-so and whilst they did not overwhelm, neither did they disappoint. Additional beers will soon follow and I am sure the quality will settle down too. One to keep an eye on.


**Edit: BM from BA Benoit, the Brewer/Owner at Benelux on 6-14-06 cleared up my misunderstanding with the toilets. I quote:

An idea of our designer. Cool for a club, maybe not for a drinking spot, as sometimes it might urge!

What I had: Benelux SMASH Amarillo American Pale Ale, Congo Belgian IPA, and Sabotage American IPA on tap, Chicken Tex Mex Panini with chips and olives.
What I liked: Dark, bustling and cosmopolitan ambience, clearly visible chalkboard draught list, cozy bar, quick and pleasant service, tasty pub grub, beers ranged from average to good quality, love the focus on hop-forward and Belgian styles, reasonable prices.
What I disliked: Neither the beer nor the food blew me away, but this is still a very solid brewpub.
Would I go back? Yes.
Overall rating: 80

The food is minimal but good - the beers I tried varied from good to excellent - the focus is Belgian as the nsme suggests but also American and British style beers - the service is rather disorganized and I watched tables around me who arrived later served while I waited. It happens, but a simple sorry would have been better than "we're busy". On parle ici seulement en français.

I love this place... the beer is amazing.. the food is great although they basically only have sandwiches.

Nice brewpub in the city center. They do flights which is a plus. Most people are out on the patio and we found a spot at the bar. 12 taps of craft covered all the basic styles. Great spot for a beer and service was solid.

Atmosphere: kind of cool interior but I didn't get to check it out thoroughly as it was empty with everyone out on the patio. nicish patio just down the street from downtown, just a short stone's throw away. otherwise nothing to quite set it apart.

Quality: I sample 3 of their beers ranging from decent to good. wide range of style from german to Belgian and American, maybe some English too.

Service: we had a nice waiter. switched to English no problem and was attentive and good.

Selection: around 10 or just more beers, wide range of styles but I didn't see any quite being the top of their style

Food: small basic menu. snacks, paninis and hot dogs. the sandwich I had was tasty but nothing to write home about.

Overall: A good middle of the day downtown Montreal stop. good beer. not far from where you need to be. good for a snack or smaller bite. not the greatest atmosphere but relaxed and pleasant.

This is a really cool place located in an extremely off spot in town at the foot of an office/condo high rise. The beer was very good and the variety of different styles was also good - offerings included a stout, saison, pale ale, DIPA, Flemish Red (among others). Really cool and vibrant atmosphere.

They do flights which is great. Beer was by far the best I had in montreal.

Server was great. He was working hard for sure. Gave me a sample of what he thought was the best beer, and he was right. I ordered a pint of it.

Nice vibe with lots of outdoor seating. Could turn the volume down on the EDM a bit, but I guess I'm an old man.

They have mostly pale ales, ipa, saisons, and sours.

Great vibe, an awesome space for a quiet afternoon. Love the owner, who was down to chat and teach us more about his craft.