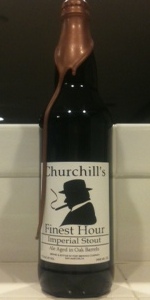 after yesterday's heaven of 2016 bottles

poured into a fw glencairn

smells great, vanilla oak and chocolate, no oxidation whatsoever, taste like a fresh beer haha. very close to 2016 but with a bit more oak and roast
Taste is fantastic! I can't believe how well this has held up, I heard it was super hot, 4 years have mellowed this one out.
much like the 2016 there are waves of chocolate and bourbon, slightly less chocolate my than the 2016.
mouthfeel is medium thick, but not as big as the 2016. should be expected sitting at 11%
overall this is fantastic, I do t see if getting better than this, I'd drink it soon. if tour going to trade for this beer is trade for the 2016 instead, it taste like a bigger and bolder version of this guy. don't pass up the chance if you run into this one

Closest thing I've had to Assassin, but just a hair shy.

Very smooth BA stout. Takes it to the next level where you can make this beer more smooth and subtle. This was a great treat, hope to try the other CFH to compare.

I love a "hot" ba beer, and this one is definitively that!

A- Older Viscosity black with minimal lacing with medium legs

S- Big booze upfront, with chocolate malts. Booze overpowers much of the nose.

M- Very smooth. Up there with BCBS.

O- If you like "hot" BA stouts, this one is for you. Almost turning on Black Tuesday's block. I am glad I got to try it, but if I had one, I would let it mellow for another year. I also don't like Older Viscosity anymore, and I am getting too much of that.