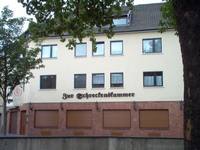 The ,,Brauhaus zur Schreckenskammer" in cologne ins near the citycenter, though hidden in a corner where usually no tourists go, it is mainly visited by locals, which adds a whole to lot the atmosphere.
In general, the atmosphere is amazing. Despite it looks rather dull outside, inside, it has a true cologne brewpub feeling which usually is not found anymore. Many details at to this authentic , old feeling. The floor is covered with sand, the wooden tabels are really old and seem to be formed by countless generations of beer drinkers. The beer hall is decorated with cologne orientated stuff , but that is not the really exciting point, the loud, but friendly and communicative atmosphere is the striking point. A lot of different people of different social classes drink their beer here- beggars, bankers...and they all sometimes sit at the same table. Amazing, this feeling of tolerance and being together as one whole nomatter how rich or poor yo are is something very typical for cologne.
Usual, you are not alone at a table for a long time.
The service ims also good, though you have to remind that the cologne ,,köbes" is always a bit rude- it belongs to his image. But they make jokes and sometimes they even take a beer and talk to you...
The beer is quite unique- an uncarbonated Kölsch, something you won't find elsewhere, and it usually served at an excellent temperature from oak-barrels. Another original thing are the ,,Beertürme",which are glass towers which are filled with beer and then brought to tables of the people who ordered them. Great for bigger groups.
The food is in general high value. Traditional reihnisch cuisine, like Halver Hahn, Hämmchen and such stuff, served with soup at amazingly low prizes and of good quality, too.

In general, this brewpub is really an exceptional place, with an unique atmosphere and an authentic feeling. Thumbs up!


Brauhaus Schreckenskammer in Köln, Germany
Brewery rating: 3.6 out of 5 with 8 ratings