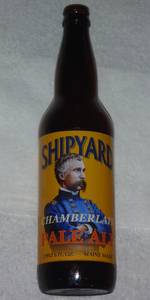 Presentation: Bomber. Single label wraps the main body. Dark green background hosts an oval which contains a portrait of Joshua Lawrence Chamberlain. Color coded dark blue, red & white crown cap. The reverse of the label describes the background to the referenced Chamberlain, which is useful because as a Brit I never even heard of the dude. Described as a Pale Ale, no strength or freshness date listed.

Nose: Well there the good start comes to a grinding halt. This one has a strange nose on it. It smells cold, chilled and stark, like frozen food that is well past its Best Before date.you pull it out of the back of the freezer and it has that stinky odor which is repressed, you know its off, but the low temperature is polite in restraining the degree of how bad this one really is. Mild sweet toffee malts and some caramel blend with bubble bath and soapy tit wanks..not good.

Taste: Right out of the stalls this one is extremely bland when chilled, in short it sucks. Nothing more than watered down Iced-Tea, and not even Liptons at that!!! The aftertaste reminded me of the feeling of quickly eating an Ice Pop (I think that is Popsicle in the US). Freezer burn on the tongue with a shimmering hint of flavor. Defrosted flavors are not much better. Hints of lemon and tannins as it warms, but the flavors are shockingly flaccid.

Overall: When I fist picked this one up, being a Brit, I knew not of Joshua Lawrence Chamberlain, the Civil War hero, moreover I thought of an engrained infamous black & white image of the then UK Prime Minister Neville Chamberlain alighting an aircraft waving a piece of paper, the paper was his shambles of an effort to stave off WW2, namely the Munich Agreement. Joshua Lawrence Chamberlain was a man of action it seemed, a fighter, as deserved hero - Neville Chamberlain was a sad pathetic excuse of a leader, a weak and wishy-washy stand-in who wanted to avoid conflict at all costs..thankfully the UK ditched Neville Chamberlain in May 1940, just in time for he was ill-defined, weak and way out of his depth.they replaced him with the enigmatic Winston Churchill, a man borne of his timesomehow I feel the same about this brew, it needs to be ditched in favor of something stronger..oh look I have an Okocim Porter.yep thatll do.

Utter crap. Not befitting of such a Civil War Hero IMVHO. Bland and Forgetful..just like Neville Chamberlain in fact.history will not be kind to this beer either I feel, but rightly so.

I had this out of a 12 oz brown bottle and served in an imperial pint glass. Best before date clearly notched for June 2005.

I've had this before from a 22 oz brown bottle from the brewery. This time around, I was able to get this beer in the Shipyard Captain's Collection 12 pack. Probably the best option in there.

Whiffs of butterscotch, sweet malts, heavy cream and a tad of hops in the background.

Pours a light, reddish amber with gold highlights and no head. Aromas are predominantly hoppy, with lemony metals showing, and some biscuity malts backing things up. On the palate, bitterness is substantial first-off, with lots of metallic flavors from the hops coming through at the mid-palate. The bitterness of the hops is expertly balanced by the malt, though, in spite of the fact that the malt doesn't contribute much aside from a clover honey in tea kind of sweetness. Mouthfeel is a bit overcarbonated, but otherwise typical. Overall, this is a decent, drinkable amber ale. Nothing special, but certainly something that I could order a few times.

Taste: Light caramel maltiness with a hint of butter. The hops impart flavors of citrus and herbs. Mild, lingering bitterness emphasized by the prickly carbonation on the finish.

Drinkability: Union General Joshua Lawrence Chamberlain was a badass. This beer, not so much.

On drat at The Inn on Peaks Island, Portland, Maine.

Poured a medium copper hue with a one finger foamy white head. There was good retention and good lacing.

The smell featured a flowery hop with a moderate grainy malt.

The taste was malt driven with highlights of grassy hops.

Picked this up at a counry store in Vermont -- I had never heard of it (but of course was familar with Shipyard), so I was curious as to what I might encounter. Here's the story:

Excellent head and lacing -- very light and pleasing; long lasting. Nice pale color. Moderate carbonation. Nice whif of maltiness with a little bit of hop spiciness. What sold this brew, however, is the taste. Very nice and sweet malt signature with appropriate accompanying hops. A warning, however: if you are a "hophead" and are looking for a very hoppy pale ale, this beer might not be for you. That said, this is a very drinkable beer -- definitely could be a session beer. Almost feels like a "throwback" beer, a la Brooklyn's "Pennant Ale." A very nice and refreshing beer.

Best before date of Sept 08; oops. Pours from a 12oz bottle into a pint glass. Emerges light tan/ sweet tea in color with a one finger sized head. Some lacing and a bit of chill haze.

Aroma wasnt very hoppy at all. It really smelled almost like a brown ale. Slightly sweet and biscuity grainy as well. Not even a touch of hops in this one. Perhaps the age has really done this one in.

Nice flavor, but not APA flavor. More in the amber ale range. More of the biscuit (this beer has a lot of biscuit it seems) and graininess. Again, not much hops. I guess the hop bitterness adds some balance because this one is only slightly sweet.

Thin on the tongue and crisp. Not bad I guess. Grainy and biscuity and not at all like an APA. Easy drinker. I will pass in the future.

Presentation: 12oz bottle (Best By of 1/08) in a classic conical pint

Poured with a gurgle and smooth. Sweet citrus on the nose, nicely hopped, a little sharp, soft pine, subtle grapefruit, hard rock candy. As it warms the hops fade and slightly caramelized malts take the point. Head was a finger's worth of mixed blanched almond foam that faded quickly to a sheen that covered the top. A brassy, warm, crystal clear copper tea best describes the body (what is it with Shipyard and orangish beer?) with a steady parade of slow bubbles sliding up thru it.

Very light on the tongue, a little creamy, mildly hopped and mildly bitter, malts are in the background and slightly earthy. Its a little too light up front for me. There are some things going on, but everything is subdued...too subdued. Someone needs to stand up & take charge. If a roomful of followers with no leaders had a "taste", this is it.

Finally, someone steps up on the palate as the hop bitters take charge over a semi-dry floor of flattened, stony malts. There is a slight orange rind quality as it fades away, finishing with bitters, a little leather, unfortunately a filmy, slightly chalky & slate like coating that leaves a chewiness that is not very pleasing.

This was very easy to drink, but its quite ironic that a beer named after the Union officer who held the flank at Gettysburg (or everyone would be saying "Y'all" now) is a beer without real direction. There is stuff going on, but no real plan/course of taste action. It tastes confused, again a bitter (pun intended) irony given the namesake. I do think it would benefit greatly with some simple pub fair, and it probably would be very good with such. But alone I think, unless offered one, pass on getting more for myself.

Shipyard is a company with which I go back and forth. I love some of their offerings, but others are just plain "blah" (Pumpkinhead, anyone?). This one is a great ale though. Bought today at MB in Hudson, NH.

S- Fruity at first smell, then the malts kick in. No discernible hop notes.

T- Malty, crisp pear and apple notes, with darker bread notes (think a dark wheat bread) and a slightly bitter finish. Hops again are not noticeable until the aftertaste.

M-Clean and crisp, a bit too dry for my liking though.

O- Good stuff! If you are a fan of crisp pale ales this is a great beer. Very refreshing after a warm day full of household activities!

Pours a cloudy golden orange with a thin white head. Some retention,and decnt laceing. Aroma is buttery, with fruity hop notes as well. Body is medium with some carbonation. Taste is bready up front, fruity as well. Piney hops in the finish. I like it a lot!

This was listed on the menu at the restaurant as an IPA. I had my doubts as this place doesn't know beer all that well. Anywho...

The malty aroma told me this wasn't an IPA (and the label told me). Sweet caramel and a tinge of butteriness. I hope this isn't tainted. From what I've read in the reviews, though, is that the butteriness doesn't go away. Still, the hops are present and slightly fruity. A bit more earthy to me.

Yup, the butter is there. Yuck. I hate that stuff. For an APA I just can't justify it. It's caramel sweetness is tainted by it. The hops just don't live that long. Perhaps I'm overly sensitive to diacetyl, if that's what this is. blah. It's not all that powerful, which allowed me to finish the beer, but it takes a severe hit to taste rating.

Pours a auburn copper color w/ a nice fluffy white head that lasts. Smells of caramel and maybe some honey with some hop. Tastes slightly sweet with a nice bitter kick to it. The flavor holds on to your tongue and has a slight carbonated hint to it as it goes down. Excellent beer, Shipyard has got to be getting big with the beers they are producing, they are no slouch to the beer scene. 2 thumbs up!