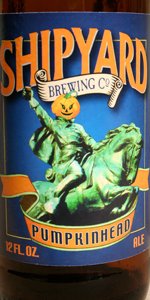 Notes: Pumpkinhead is a crisp, refreshing wheat ale with delightful aromatics and subtle spice flavor. To celebrate the fall season, we enhance the pumpkin flavor with a proprietary blend of spices including cinnamon and nutmeg.

A proper pint of Pumpkinhead is served in a pint glass rimmed with sugar and cinnamon and often accompanied by a shot of spiced rum or vanilla vodka.

The colour is clear yellow; the finger thick head is white. No lacing.

The smell is sweet, fruity and a bit spicy with some roasted notes. Pumpkin flavours are evident, as is an artificial candy-like note of fruit-drop and Coca Cola.

The taste is drier than the smell. A flavour of Coca Cola-flavoured candy dominates the taste. There are also notes of pumpkin jam, cinnamon, tea and toffee. The aftertaste is artificial with some light sour-bitter notes and sweet caramel.

Pumpkinhead Ale brewed by Shipyard Brewing Company, with an ABV of 4.50% This pumpkin beer pours out of a 12oz glass bottle into a pint beer glass. The color is a deep golden amber color with a nice white head. There is also a nice amount of lacing to this brew, it sticks to the side of the glass well. The smell is rich with pumpkin lot of it to, mild spices to the nose. You also pick up a nice amount of grains in an malts in the smell as well. So far Pumpkinhead Ale is a nice inviting brew. Now for the taste, it is Bold with flavors. This pumpkin brew is definitely more pumpkin than spices, not saying that is a bad thing. Really kinda digging the pumpkin flavor mixed with the grains an malts. The spices are there , cinnamon, nutmeg, Ginger notes , but nothing overpowering. The body of Pumpkinhead Ale is a solid medium, there is nothing overpowering about this brew. This brew would go nice a cool fall day. The mouth feel is Bold, Rich, Pumpkin, Clean, Smooth and Refreshing. Overall I am going to give this brew a solid 4 out of 5. I would definitely look this brew up again givin the opportunity to. Shipyard Brewing Company did a super nice job with this pumpkin brew.

Look – Bright orange color with transparent body and a finger of white head which disappeared quickly.

Aroma – Subtle notes of pumpkin and cinnamon with not much else going aside from maybe a mild potpourri scent.

Taste – Light. Everything about this beer is light. Light pumpkin, light cinnamon, light nutmeg, etc. Nothing too bold or robust, but it’s still there. Flavors don’t linger at all and it finishes clean.

Moutheel – Light-bodied with decent carbonation. It’s like soda on the tongue

Overall – This was probably your first pumpkin beer, and hey, as an introductory pumpkin beer, it serves its purpose. There are many better examples out there, but still, this is easy to drink and does have just enough flavor to keep you entertained.

12-oz can poured into a pint glass.

L- Pours a clear, golden amber color with a tinge of copper and a generous finger of tan-colored foam that dissipates quick and leaves a thin lacing.

T- Pumpkin pie, some bready malt that follows, overload of spice and sweetness. After a few sips I realized in the aftertaste that this tastes like a Coke

F- Light-bodied, very carbonated, for a seasonal pumpkin ale it’s crisp and drinkable like a lager, finishes slightly sticky from the sweetness

O- Good enough for your once-a-year pumpkin spice fill, at least in the beer realm. Not very balanced with the pumpkin pie flavor overpowering all other aspects and the similarity to drinking a Coke. But drinkable enough to get you into the Halloween/fall spirit.

This is A-OK ! Definitely pumpkin taste. Quite sweet but i find it enjoyable. It reminds me pumpkin soda i used to buy at Aldi. Not as sweet though. It's kind like one of those fruity beer, with enough fruit flavor that it doesn't feel like beer anymore. I wouldn't drink this often but fun for the season.

I look forward to at least one Shipyard Pumpkinhead every fall! A little more sweet than my ideal, and the nutmeg/pumpkin flavor could be a bit more subtle, but otherwise a great pumpkin beer. ABV is low, so a good choice if you prefer something light.

I very rarely give flavored beers a try. Certainly when it comes to something as seasonal as pumpkin. That said, this is the ONLY pumpkin beer I will drink.

The taste isn't overly sweet or taste artificial. The best pumpkin beer on the market and thoroughly enjoyed in the fall/around Halloween.

Not my favorite pumpkin beer. It's meh. Smells great but it's a bit blah. I'll drink it but I prefer more pumpkin flavor in a pumpkin beer. This is probably the weakest of it.

A - Golden brown with some orange tints and good clarity. Thin sheen of bubbles and head surrounds the glass.

O - Decent Pumpkin brew, but lacks a bit of touch and balance.

From a bottle. Poured out with a short lived off-white foam head with a clear, golden-amber body. Scent is pleasantly of pumpkin with minor hints of spiced flavors (nutmeg, then cinnamon). Taste follows, although at times their is an almost stagnant like quality (like nutmeg that is a bit old), although in general the flavors are pleasant. Feel is on the crisper and lighter side with only a slight nutmeg aftertaste remaining, which doesn't exactly surprise me given its lower ABV and wheat ale background but could do with a bit more heft. Overall much more like a wheat ale with a smattering of pumpkin with a dash of spice rather than pumpkin pie in a bottle which can be a nice change of pace.

This one pours a light straw yellow, with a slight orange tint, with a small head, and a bit of lacing.

This smells like very little, with some kind of corniness, some metallic aromas, perfume, and light cinnamon.

This essentially tastes like a light lager with a pumpkin candle lightly shaved into it. It's not very good - not good at all. There's a weird floral almost perfumey/dishwater sort of thing as well.

This is very thin, and a little bit flat, and just not an enjoyable thing to drink.

This really can't be recommended for anybody. It's just quite poorly made.

Pours a clear medium yellow/orange color. Aroma is mainly pumpkin, not the usual spice aromas. Flavor is again mostly pumpkin, not to a of pumpkin spice like so many other pumpkin beers. Pretty light bodied, carbonation is appropriate. Overall a very easy drinking pumpkin beer that is not overly spiced.

F---Fairly light, which could be expected from the low ABV. Well carbonated. A bit airy even.

So, pumpkin ale - not PSL - is where my basic bitch shines. Southern Tier, Pumking and all its variants are right up the road, so even though I’ve never met a pumpkin ale I disliked, I know what the really good stuff tastes like.

All that said, this was solid and I enjoyed it. Not the prettiest, creamiest or most sophisticated beer out there, but you will enjoy it when the temperature is 50-68 degreees. Lightly spiced with those ubiquitous fall flavors, a touch sticky and highly drinkable.

Look: Pours a light orange, yellow hue with a half finger off white head that fizzles away immediately. Leaves no lacing.

Aroma: Very mild / nondescript. Not much on the nose, which is very disappointing. I'm getting some off metallic/aluminum notes. Sugary pumpkin puree in the background but it's very tepid. Vague cinnamon and graham cracker but it's muted and hard to pick out.

Taste: There's a strange, almost apple cider cinnamon / cranberry flavor to it . . . very odd. The pumpkin flavor is mild, almost an afterthought. Some sour undertones . . . yeah I'm not digging it but it isn't that bad. Thankfully the metallic notes on the nose don't translate over to the palate. Moderate creaminess. Aftertaste of dry cinnamon and tepid pumpkin puree. Overall very underwhelming but not necessarily bad or offensive. It's nothing to write home about however. I have a feeling the nutmeg and cinnamon they are adding to this masks a lot of the beers flaws (and even it's good qualities unfortunately).

Feel: Probably the best thing the beer has going for it. Medium body (although most of the weight is coming from the spice), medium carbonation. Borderline fizzy. Somewhat thirst quenching, if it weren't for the lingering effects of the spice. Apparently this is brewed with wheat? It doesn't feel like it, but again, I have a feeling that's due to the amount of spice being used here, and the relatively high carbonation.

Overall: You can tell this was made with concentrate and not fresh pumpkin. A real shame, because this would be a lot better if it was, and if they dialed back the spice a tad. For what it's worth, the cinnamon/nutmeg spice is a nice redeeming quality, but spice shouldn't be center stage in a pumpkin beer, pumpkin should be. A lot of people get turned off by a good rich pumpkin beer which is probably why they went for a lighter version of the style, something a little more palatable to the masses. Still for people who like the roasted, nutty flavor of pumpkin it's unmistakable when compared to concentrate and dearly missed here. This would probably appeal to people who are looking for a lighter style pumpkin ale, but I need more pumpkin in my pumpkin beer.

At the end of the day it's decent, but it could be so much better.

Finally! A good pumpkin beer. After tasting a LOT of pumpkin beers ranging from blue moon to lakefront brewery I really only found one that I thought was OK. but this is a great blend between authentic pumpkin flavor and great pumpkin spice with vanilla. The lakefront brewery pumpkin tasted like a generic lager with pumpkin spice dumped into it but this was a pleasant surprise that tasted just like a pumpkin pie with some wheat beer to it. I am an outlier in this for sure but its quite literally the perfect blend to be liquid pumpkin pie. It lacks depth and great beer characteristics like malt depth but realistically a lot of specialty beers like these do. Id put this on the same pedestal if not higher than punkin from dogfish.

Look: Clear gold with a slight orange tint. About one finger of foamy white head with decent retention.