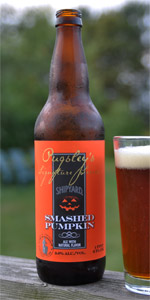 Rated by tsfinn23 from Pennsylvania

Notes via stream of consciousness: 9%, eh? That sure makes sense given the name. This one is brewed with natural flavors which is fine by me. It's an absolutely clear copper orange in color with glimmering golden highlights along the base of the glass. The head is a finger's width of tight-bubbled, slightly yellowed off-white foam. In the nose I'm finding sweetish, bready, biscuity, and caramelish malt backed by a delicate waft of fruitiness and pumpkin spice. It's not what I think most people would expect from a pumpkin beer but I find it quite enticing, and to be honest, quite English in nature as it's noticeable but refined. The cinnamon and nutmeg are present but not bold or brash. There's also some apple which is nice. On to the taste, it's got more spice to it, and a clear presence of alcohol, but it works. I get the bready, biscuity, wheaty, and carmelish malt threaded through with cinnamon, and then some more spice (nutmeg, allspice), apple, and vanilla appear as the alcohol comes forward, amplifying the spices and then settling down in the swallow to allow them to swirl about and eventually settle. Still, a dusting of cinnamon remains on the palate, fading to reveal more of the apple flavor. I initially thought that the apple had come from the yeast but it might actually be part of the flavoring they've used. I rather like it, but I'll also say that I doubt I would like it as much if it didn't have the snappy alcohol that it does. It's clearly a strong ale, and as such, in combination with the spicing, it becomes a great sipping beer. This is definitely not something that I'd want to have at a party, but rather something to wind down with later in the evening. It would be a great beer to nip at while reading, and of course Ichabod Crane and the more appropriate character of Brom Bones come to mind, but I also thought of the writings of Wallace Stegner as being appropriate. You could read whatever you want of course. In the mouth it's full bodied, and gently crisp and then smooth across the tongue with a fine-bubbled, moderate carbonation. The head has held up quite well and it's left beautiful lacing about the glass. All in all this is far different than a lot of pumpkin beers on the market, and had it been labeled simply as a spiced strong ale I'd be just as happy with it all year 'round. I may even pick up more if it's available as I'm looking at 5 months of cold winter nights.
Review #8,285

Reviewed by DCH from New York

Reviewed by akaizer from Virginia

3.28/5  rDev -12.1%
look: 3.75 | smell: 3.25 | taste: 3.25 | feel: 3.25 | overall: 3.25
From a pint can. Pour has a vibrant copper color with a slightly off white foam head that lingers around. Scent has pumpkin, sweeter malts, cinnamon, and a fair amount of alcohol. Taste is somewhat subdued with the alcohol and cinnamon seemingly winning out, followed closely by the pumpkin. Feel is medium bodied, smooth, and has quite a bit of sweeter alcohol flavors in the aftertaste. Not my favorite pumpkin offering as it seems to fall just a bit short in the expected flavor profile.
Oct 26, 2020

Rated by PSYCLST from Pennsylvania

Reviewed by Neil_86 from Ohio

Overall - The aromas as you drink this beer are what really carry it. Outstandingly fresh pumpkin pie smell and a decent ale behind it.

Reviewed by Seanjohnhunt from California

4.14/5  rDev +11%
look: 4.25 | smell: 4 | taste: 4.25 | feel: 4.25 | overall: 4
Poured moderately hard from a tall can into a snifter glass, forming a few fingers of foamy off white head. Beautiful dark gold color, with very little if any lacing after the head faded. Mild but pleasant pumpkin smell. Very straightforward and tasty pumpkin flavor, no spices or anything. Light to medium bodied with just a hint of carbonation. Simple and uncomplicated pumpkin flavor, which is a bit simple for my preference, but good if you like pumpkin.
Aug 08, 2020
Rated: 2.72 by SFHbeerME from Maine

Mmmm, the aroma is heavy on the cinnamon, reminiscent of baked pumpkin, with mild spices to balance it out, very earthy

I’m kinda blown away by the taste of this one. Of the relatively small number of pumpkin beers I’ve had, this one is bigger in every aspect. The pumpkin here is so authentic, not overly sweet or anything. There’s a wonderful interplay of spice and fruit and vanilla that balances this beautifully. I’m shocked at some of these low ratings

Doesn’t feel all that heavy for the abv or the taste, medium bodied at best, with some light carbonation to finish

Absolute best pumpkin beer I’ve ever had, I can not wait to have more. I didn’t even have this “in season” either, and I could even enjoy it in the middle of summer

A bit too warm to be balanced, and the artificiality of the pumpkin that's supposed to be the heart of this beer really works against it.

Drinkable but dull. Not a great pumpkin ale.

The mouthfeel is a little thinner than I’d expect in a 9% beer, but overall, this is a nice fall sipper.

Reviewed by klarcbarr3 from Michigan

I got a four-pack of this a few weeks ago for like $11, which is utterly insane for what you get here. This is a 9% pumpkin beer, and each can is 16 ounces. Sure, it's not the best of the best by any means, but it's definitely a case of bang-for-your-buck, and it's good in its own weird way, especially compared to its own younger brother, Pumpkinhead. I've had at least one bottle or can of this beer every year since I first discovered it, so I feel qualified to talk up its benefits while also giving Shipyard some crap for continuing to exist in 2019. Alright, kinda kidding... a bit.

Pours an absolutely gorgeous medium-amber color with a little bit of clarity to it. Expressive, dense light-khaki head with a modicum of decent lace... am I dreaming? Nope, I'm not... SP has always been a great-looking brew. This just pours beautifully, and I'm happy that throughout the years, they have managed to not mess this up. It bodes well for the beer in general.

The nose of Smashed Pumpkin is pretty hefty on the estery, ethanol-forward elements, I must say. Aside from that, there's some nice squash-like pumpkin notes, earthy and herbal hops, and a huge helping of dense malts. Munich malt does a LOT of the work here, carrying a big caramel aspect throughout the entire drinking experience, but it starts in the scent with some breadiness. There's a candy-like note and some brown sugar as well, both of which set this aside from Pumking which deals in graham cracker-like crust elements and vanilla whipped cream suggestions in the nose where this just feels downright earthy. It's gonna depend on your preference, and if you choose SP, you're basically wrong.

The flavor profile here is cinnamon, nutmeg, and allspice with a bit of molasses, brown sugar, and pumpkin/squash-like earthy flavors that coalesce surprisingly-well in the mid-palate. For a beer clocking in at 9%, though, this honestly feels kind of watery and ineffectual, and there's next to no hop balance. Bigger gulps bring out way more cinnamon than my palate is comfortable with, which leads me to believe this is too strong, too overly-spiced, or both. Malt flavors are mostly biased towards traditional Munich malt, with dense caramel and toffee balanced with an almost-wheaty complexion, though the feel is light and deft.

So yeah, this is just poor man's Pumking. Nothing wrong with that, really. It has a bit too much ethanol presence and feels too phenolic and estery to me, but you get what you get, and you don't get upset... especially for the stupidly-low price. You can do better, but you can also do worse if you get Pumpkinhead. The choice is obvious, and it's not this beer.

Reviewed by ViggieMech from Florida

S: pumpkin pie spices on-point (like their 'head), this time sporting some of the caramelized notes from the dessert, as well as the buttery crusty malts... bit of a lactic note? - or is that spices and phenols casting out some tang?

T: immediate hit of butterscotch-y, solvent-phenolic, crap Belgian strong ale clone - reminds me of a Weyerbacher fail... the aftertaste carries a bit of spice, but is otherwise strangely flat and dry, with a faint note of buttery caramel sweetness, maybe some bitter gourd, but little else... it mellows and opens up a bit, but it's mostly a mess of gingered pumpkin concentrate syrup and nutmeg

F: uncomfortable goopy roll up front, though the booze fans it out, washes it away somewhat.. lightly wort-y push, luckily some suds seem to help the booze lift it - if not for the booze, this would be a chore though

O: they must've just put this out on the shelf today... wow again! - the spices are right, but the execution is near atrocious... far from moreish - fitting it's in a tallboy, as I could only see pumpkinheads enjoying this on the streets... not a repeat buy by any stretch (1457)

Reviewed by SB2017 from Iowa