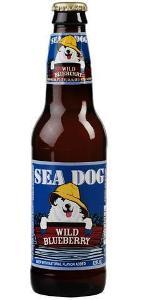 Blueberry, all around, with a little wheat near the end. A great beer.

Taste Rating in Words: Waking up on Sunday morning to blueberry waffles and bacon.

L: Not as pretty as everything else it has to offer; brown-gold with a very thin head that does not last. No lacing.

S: Smells really quite great, very sweet and fruity with a malt backdrop.

T: Sweet and blueberry nose, which ends on a malt and mild bitterness. Deffinitely easy drinking. It tastes a lot better fresh, so go visit portland and try it, but from the bottle is deffinitely is still fantastic and goes down easy. Not too sweet, but sweet enough that even some none beer-drinkers might like it.

F: Feel is kinda meh. Low fizz and not a lot of body, but it doesn't necessarily take away from the beer.

A nice blueberry flavor thats not overwhelming, with A nice amber color. It's a great beer to try in a mixer-sixer if you like trying new and different beers.

T: Pretty good beer actually tastes like blueberry waffles and it's actually pretty good, they did a good job on this beer.

O: A quite nice beer from this brewery I like the peach one better.

The color is a deep golden yellow with a quickly dissipating white fizzy head.

I can pick up the blueberry sensations a yard from my nose with a toasted bread aroma.

The taste highlights the bittersweet flavors of blueberry hovering over the toasted malt and a clean hop finish. I am not a blueberry ale fan but this one is alright.

The blueberries works with the wheat beer. They are subtle. I downgraded the beer due to a metallic taste I get. I also know I have a very low threshold for this flavor and get it in a lot of beers.

*I didn't know this was retired. My 6 pack appears to be fresh*

A- Hazy amber color, but it looks golden in some lighting. Hazy amber is the real color. Head was just like a macro lager. It died fast. Not gonna win over anyone in it's appearance.

S- Big blueberries and malty, grainy notes. It's kind of like a blueberry pancake. That seems to be the typical note in blueberry beers I've had. There is also a syrupy, almost artificial, kind of sweetness in there. Faint butterscotch as well.

T- Butterscotch and sweet blueberry. Maybe some pale malt to go with that, I guess. Some grains. Some bitter and lightly sour notes before it finishes fairly dry. Nothing is off-putting. But not a whole lot to write about.

M- On the light side of medium. Very crisp! It is refreshing and clean tasting. Less carbonation would have been better. Carbonation is almost like soda water.

Overall this isn't too bad for a blueberry ale. Beers with blueberries seem to taste better than other beers brewed with fruits. I can see having a beer like this with brunch or a light lunch. It's not bad at all. It's just a simple beer is all.

A fine summer beer with obvious notes of blueberry to the nose and palate. The label doesn't mention the origin of blueberries other than to say that it is "natural flavor," but the taste and smell almost seems to striking to be "natural." Not a bad beer, and I'd definitely drink it again--especially on a hot summer day--but in my opinion one of Shipyard's less impressive offerings. For a more subtle and convincing blueberry ale go with Atlantic Brewing Co.'s Bar Harbor Blueberry.

Had this one a few times before and last sampled last night on 1/23/14. Bottle chilled down to 36 degrees F and poured into a pilsner glass.

Pours a clear golden yellow with a good 1+-finger of white head that doesn't last long. Some spotty lacing was seen when sipped. The explosion of blueberries comes through when first opened! Smells fantastic! Average carbonation. Lots of blueberry taste with a 'wheat' finish. Very pleasing overall.

They don't sell you short on the "blueberry-ness" of the beer. From the time you crack the top, to the first sip and swish in your mouth, expect a full palate of blueberry. This is truly a fruit beer geared for those willing to sacrifice complexity in the name of a refreshing, easy summer drink. Great for parties, the beer pairs well with a variety of grilled meets and easily fit into summer-themed parties. Don't expect much in the way of hops or non-blueberry tasting qualities. It is what it's advertised to be, a truly blueberry-centric beer.

One of the best fruit beer I've ever tasted. It's not overpowering and has a nice balance. Light, tangy, crisp.

When you open a bottle you get a distinct blueberry smell, followed by some nice hops. The flavor is certainly blueberry but again, not overpowering. Some citrus notes, a bit of spice, followed by a nice bitter hops finish but smooth throughout. Appearance-wise, the beer has a coppery color, light foam head.

I've tried a great many fruit beers and most do not get the right balance: either being too sweet or losing taste of the fruit all together. Sea Dog tends to get it right with all their beers.

As a BLUEBERRY beer this rocks. As a beer it has some shortcomings. Remembering that it is a solid fruit beer. No doubt is meant for blueberries. Flavor is mark on blueberries. Not much else. The wife has been drinking this for the last 8 years and decided to try finally. Light on the taste buds but the blueberries will crack it the same as the bitterest hops. Good for its intended purpose though.

Gold with a big, fizzy head. Head died before my enthusiasm for this beer did.

Poured into a tulip. two-finger bone white head dissipating quickly, no lacing. Tons of carbonation streaming off the bottom of the glass.

Blueberries of course dominate the nose with some bitter hops coming through and a light pale maltiness supporting the background. Aromatics are surprisingly good.

Light, crisp blueberries go pretty well with the hop selection, which are tangy and citrusy as well, but very understated as one would expect from this kind of beer. The maltiness comes through mid palate which is actually pretty smooth and sustains a clean mouthfeel throughout.

Disclaimer: A buddy and I split a growler of Pliny the Elder last night so maybe my taste buds have been ruined for the week. Either way, seadog was a nice change of pace but I think there are better fruit beers out there.

This brew pours a solid copper color with a small head which dissapates quickly. Good carbonation. There is almost no lacing and none is left in the glass at the end.

The smell is very pleasant. Full of blueberries and some wheat. Also citrus hops are present.

The taste follows the nose; the brew tastes like a blueberry muffin, blueberries and wheat, with crisp hops on the backend. There is a blueberry and slight hop aftertaste. Sweet tasting overall.

The mouthfeel is clean and crisp. Lots of carbonation.

Overall, if you like blueberries you should give this a try. The brew does not have complex malts or hops but it does deliver on the blueberries.

In a pint glass:

A: light straw yellow body with a small white head that didn't last long, no lacing

O: just another blueberry beer, nothing outstanding, but nothing bad

Poured into a taster.

Appearance: Light straw yellow with small bubbles streaming to the top, not much head retention.

Aroma: Straight up blueberries with a hint of cinnamon.

Taste: Again with the blueberries, but not like fresh blueberries would taste. The taste reminds me of blueberry jam or extract. It's sweet then it is tart.

Overall: They definitely accomplished what I feel they wanted to make, a beer that has blueberry taste and aroma; however, it's not balanced and could use tartness.

Sea Dog Blueberry from Shipyard Brewing Company
Beer rating: 77 out of 100 with 199 ratings